Since NuScale’s Power Module was chosen to receive DOE support in December, members of the nuclear industry including Fluor Corporation and Babcock & Wilcox have signaled waning support for SMRs. Some have cited the technology’s poor commercial prospects.  DOE officials, meanwhile, have continued to express strong enthusiasm about SMRs despite the concerning indications from the industry.

Even before the DOE award, Fluor Corporation indicated that it wanted to decrease its investment in SMRs by looking to sell off its stake in NuScale Power. In a conference call with investors in February, Fluor executives reiterated their desire to divest NuScale and reaffirmed their intention to spend less on the project in 2014. In March, NuScale announced that it would partner with Enercon, a nuclear engineering company, to develop the Power Module, propelling the project forward despite Fluor’s unwillingness to invest more of its own money in SMRs.

The other recipient of DOE Licensing and Technical Support grant, Babcock and Wilcox (B&W), has also signaled a desire to decrease its investment in SMRs by pursuing a similar search for investors. In February, the company reported that it was unable to find any company interested in acquiring a majority stake in B&W’s SMR subsidiary, mPower. B&W CEO Jim Ferland conceded “…investors that want to take even minority positions are relatively hard to find.” As a result, B&W has decided to cut its funding for mPower from $60-$80 million per year to less than $15 million. In April, the company notified the SEC that it had fired the mPower CEO.

Westinghouse Electric Co., one of the unsuccessful applicants for DOE funding, also announced it will reduce funding for SMR development. The company’s CEO cited the poor market and economics for SMRs.

In an April hearing before a House Appropriations subcommittee, DOE Sec. Ernest Moniz acknowledged that he was concerned about the industry’s revelations, but continued to voice strong optimism about the future of SMRs. Appropriators in Congress should recognize the technology’s abysmal prospects and cut the SMR program’s funding. Unfortunately, DOE can’t seem to take the hint.

In December, the Department of Energy (DOE) announced that Oregon-based NuScale Power LLC has been chosen to receive up to $226 million to help finance the design, certification, and commercialization of the company’s small modular reactor (SMR) concept, called the Power Module. This marks the second award under the Department’s SMR Licensing Technical Support program which first announced the opportunity for funding in March, 2013.  The program made its first award of up to $226 million to 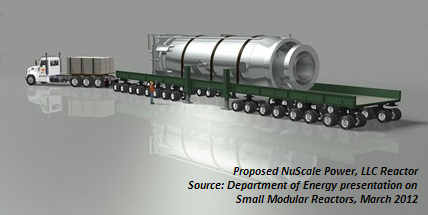 Babcock and Wilcox mPower Inc. in April, 2013. Under the public-private cost-share agreement, DOE will pay up to half of the costs of NuScale’s Power Module project over the next five years.

DOE touted the grant as a ‘new investment’ in a ‘new project’, but taxpayers have been supporting NuScale’s Power Module for more than a decade now. Oregon State University and the federally-funded Idaho National Laboratory developed the original design for the 45 MWe integral pressurized light water reactor – now the Power Module – in 2000. NuScale, which is 80 percent owned by Fluor Corporation, acquired the rights to the technology in 2007. In 2012, DOE allowed NuScale (along with Hyperion Power Generation Inc and Holtec International subsidiary SMR LLC) federal assistance developing, testing, and licensing a prototype of the Power Module at DOE’s Savannah River Site. Now, the DOE has decided to invest in the Power Module SMR for a third time, but the technology’s costs and licensing uncertainties make it unlikely that ‘mini-nukes’ will ever deliver affordable electricity.

Commercial nuclear reactors (producing around 1000 MWe) cost around $8 billion or more to construct.  While there are no reliable cost estimates for SMRs, DOE officials have projected that the first few (producing 100-150 MWe) will cost around $1 billion each. However, this price does not include the estimated $1 billion cost of getting the Nuclear Regulatory Commission (NRC) to certify the SMR design.

The prospects for SMRs’ viability seem bleak, but the DOE continues to assert that miniature nuclear reactors are the next big thing. If there is an emerging global industry for SMRs, then DOE should stop wasting taxpayer money and let huge corporations like Babcock & Wilcox, Westinghouse, Holtech International, Rolls Royce, and Fluor Corporation (which stand to profit from SMR commercialization) invest in the technology.