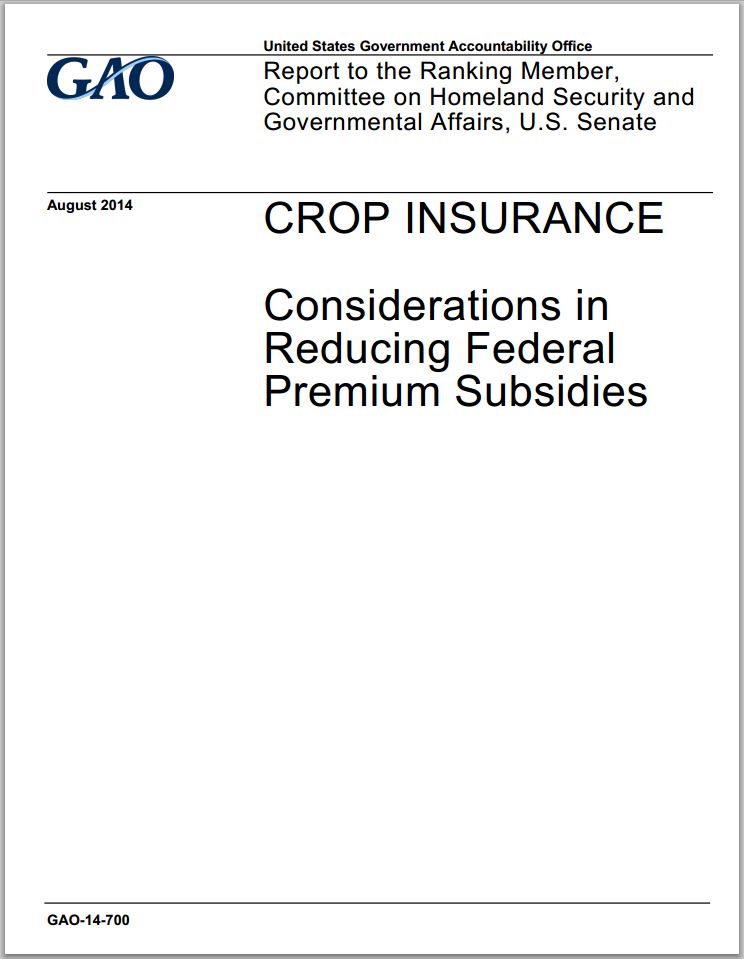 Today, the Government Accountability Office (GAO) released a new report providing more evidence that reducing federal crop insurance premium subsidies would have little effect on agricultural producers’ bottom lines while saving taxpayers billions of dollars. The report, requested by Senator Tom Coburn (R-OK), Ranking Member of the Senate Committee on Homeland Security and Governmental Affairs, estimated that taxpayers could have saved $2 billion in 2012 if premium subsidies for the most lucrative and expensive revenue insurance policies were reduced by just 20 percent.

The report also confirmed that U.S. farms earn more than the average American household and have enjoyed high income and profits over the past several years. Nearly 80 percent of taxpayer-paid premium subsidies are for revenue policies, which cover dips in either crop yields or prices, instead of simply yield-based policies which pay out after catastrophic crop losses. On average, taxpayers pay 62 cents for every dollar of insurance coverage while producers pay the other 38 cents.

In particular, GAO recommended Congress reduce crop insurance premium subsidies for revenue-based insurance, or agribusiness income guarantee policies. In the recent farm bill debate, this was one of several reforms TCS recommended that Congress implement to rein in the highly subsidized federal crop insurance program. Crop insurance has recently become the largest federal support for agriculture, nearly tripling in cost over the past decade. It primarily benefits the largest agribusinesses since subsidies are tied to planted acres. Indemnity payouts and premium subsidies are also unlimited, meaning some producers receive over $1 million in crop insurance premium subsidies each year. In a previous report, GAO found that implementing a simple $40,000 premium subsidy limitation for each individual – which would only affect four percent of producers – would have saved taxpayers $1 billion in 2011.

GAO noted that the “U.S. Department of Agriculture (USDA) said it had no comments on the report’s findings” even though each of President Obama’s past three budgets recommended a reduction in both premium subsidies for producers purchasing the most highly subsidized policies and administrative and operating subsidies paid to private crop insurance companies each year. The President also recommended the elimination of a special interest crop insurance policy (salmon), similar to a recent TCS report exposing the lack of transparency and powerful influence of the farm and crop insurance lobbies on USDA approval of new crop insurance policies.

For more information on the federal crop insurance program, see our fact sheet. For a more comprehensive list of our recommendations for a more cost-effective, accountable, transparent, and responsive farm safety net, see this fact sheet.