Political Power of the Agribusiness and Crop Insurance Lobbies

Political Power of the Agribusiness and Crop Insurance Lobbies

The so-called Farm Bill currently being negotiated in Congress is shaping up to be another taxpayer-funded handout to wealthy landowners, agribusinesses, and the crop insurance industry. Held up as a safety net for mom-and-pop farms, current agriculture policy is a glaring example of corporate welfare, wasting billions of tax dollars every year. Even though lawmakers have thankfully agreed to eliminate direct payments, one of the most costly and outdated subsidies, they are failing to reject the agribusiness and crop insurance lobbies’ demands for new and potentially just-as-costly income guarantee subsidies. The proposed policies will not only benefit farmers who pay little or nothing for their own insurance policies but also crop insurance companies receiving subsidies to carry out various crop insurance and shallow loss programs. Congress’ failure to eliminate agricultural entitlement programs during a time of record national debt and farm profits is a testament to the power of the agribusiness and crop insurance lobbies.

Agribusiness and crop insurance interests spend millions of dollars lobbying Congress and various federal government agencies each year.1 They spent $95 million last year – more than $261,000 per day – and also fielded 840 lobbyists, more than one for each member of Congress. And their lobbyists are no strangers to Washington, DC, given the fact that one out of every two previously worked on Capitol Hill or in federal government. One even wrote the 2002 farm bill as Chairman of the House Agriculture Committee from 1999 to 2003. Larry Combest, a former Republican Congressman from Texas, and two of his former committee staff members now lobby for groups that bring home billions in subsidies annually, like the Crop Insurance Professional Association, American Sugar Alliance, USA Rice Federation, Western Peanut Growers Association, and Cotton Warehouse Association. Since 2006, these types of well-connected groups have spent over a half billion dollars lobbying, or more than $1 for every taxpayer dollar spent on subsidies and other programs in the Farm Bill. Below, note that lobbying ramps up in years leading up to Farm Bill deliberations (before 2008 and 2012).

Unsurprisingly, the majority of these political contributions go to the leaders of each committee. House Agriculture Committee Chairman Frank Lucas (R-OK) has received the most contributions of any member – $461,767 – so far this election cycle. Ranking Member Collin Peterson (D-MN) took in $342,232 from agribusiness and crop insurance interests. On average, each of the 44 House Agriculture Committee members has received $98,500 in agribusiness and crop insurance-related campaign cash, more than three times the average for all members of Congress. Other than the committee leaders, the largest crop insurance PAC contributions have gone to Texas Republican Congressmen Randy Neugebauer and Michael Conaway. Since both sit on the powerful General Farm Commodities and Risk Management Subcommittee which oversees their industry, crop insurers have rewarded them with $36,839 and $36,339, respectively, to keep billions in taxpayer subsidies flowing to individual insurance companies and agribusinesses. The top recipient in the Senate is Agriculture Committee Chairwoman Debbie Stabenow (D-MI), who has received $428,071 so far this election cycle. Others receiving large sums of campaign cash include former Committee Chairman Richard Lugar (R-IN), who has since been defeated in the Republican primary, and Pat Roberts (R-KS), Ranking Member of the Senate Ag Committee. The table below lists agribusiness and crop insurance contributions to all agriculture committee members.

RELATED ARTICLE
4.6 Ideas for the Department of Agriculture 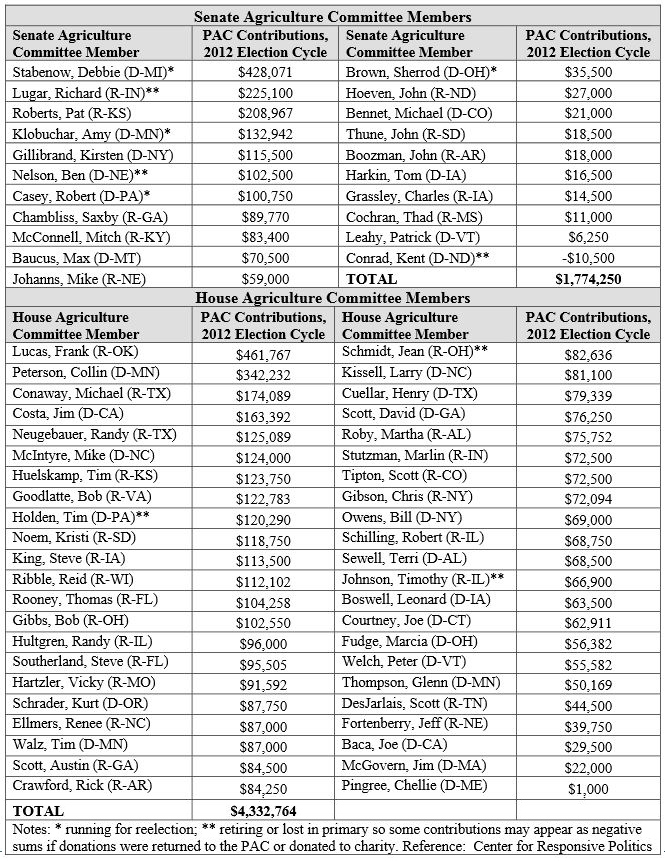 The agriculture industry has gotten a good return on their investments in lobbying and political contributions, as Congress has been good to farmers over the years, at the expense of taxpayers. Taxpayers are projected to spend at least $120 billion over the next decade on agriculture and crop insurance subsidies, much of which will go to insurance companies and growers of just five crops (corn, soybeans, wheat, rice, and cotton). Taxpayers send $1,200 to crop insurance companies each time a policy is written, in addition to serving as the financial backstop in the case of catastrophic droughts or floods. The Government Accountability Office found that the top 4 percent of farm businesses take in 33 percent of all crop insurance premium subsidies, while the U.S. Department of Agriculture notes that farms with sales of $100,000 or more receive over 80 percent of all farm commodity payments.

Nonetheless, subsidies continue to flow from House and Senate Agriculture Committees to those special interests with the most cash and lobbying muscle. Instead of heeding the advice of several deficit reduction commissions, the committees have bowed to special interests by proposing to increase crop insurance subsidies and create new, costly “shallow loss” entitlements. While lawmakers have finally agreed that direct payments, a $5 billion handout to landowners and farm businesses, are indefensible, they have unfortunately proposed to “spend” these savings instead of putting the dollars toward deficit reduction. Direct payments were originally meant to ease farms off government handouts, but instead were made permanent. Now, checks are cut regardless of crop prices or even if crops are currently grown on the land. New “shallow loss” programs, if passed, would be an unprecedented government intervention into the everyday risk management decisions of farmers. The new, complicated subsidies will only create more market distortions into a sector expected to reap a record $122 billion in profits this year. Shallow loss programs are designed to sit on top of federal crop insurance, a heavily subsidized program that is expected to cost taxpayers $90 billion over the next decade on not only crop losses, but also small dips in revenue. Under the existing system, taxpayers pay 60 cents for every $1 of insurance premiums for some producers. In the future, producers could receive free subsidies and huge payouts if their revenue (price multiplied by yield) dips as little as 5 percent below an expected level. Thanks to their lobbying power, new carve-outs have also been proposed for cotton, catfish, popcorn, and peanuts. So while most Americans are tightening their belts, the farm lobby is ensuring that taxpayer-funded handouts continue to prop up special interests.

Congress has a prime opportunity to reduce the federal government’s role in the agricultural sector while saving taxpayers tens of billions of dollars per year. The House of Representatives called for a $30 billion cut in farm subsidies over the ne xt ten years, and the President’s budget proposal called for even more – $33 billion. But the farm lobby ensured that the Senate passed a farm bill with only $23 billion in expected savings, a mere 2.3 percent haircut from the Congressional Budget Office’s trillion dollar baseline. The House Agriculture Committee trimmed slightly more – $35 billion – but Committee leaders have already stated these cuts would be reduced. In any case, it is a pittance compared to our $16 trillion national debt. If lawmakers simply eliminated direct payments and reformed the crop insurance program, taxpayers could save $107 billion. It’s time that Congress says no to the status quo and instead creates a limited, effective, and efficient safety net for agricultural producers instead of lavish, poorly directed subsidies.