Taxpayers have been losing big on the sale of coal mined from federal land for decades. But hopefully that’s about to change. The Bureau of Land Management (BLM), the feds’ land manager within the Department of the Interior, says they are finally considering doing something about it. We took them at their word and gave them some words of our own.

On Tuesday, the BLM hosted its fourth “listening session” on how it can best ensure that American taxpayers receive a fair return on federal coal. These sessions have been taking place across the country and Taxpayers for Common Sense has been on the move. Recently TCS spoke at the Washington, D.C.; Billings, MT; and Denver, CO sessions to deliver the taxpayer view. Based on the public input they receive during these sessions, BLM will likely propose new policies for the coal program, including potentially raising the royalty rate, in addition to the changes it has already proposed. As we have said before, there are a lot of problems with the federal coal program that BLM needs to fix.

TCS told officials at BLM that they should take this opportunity to make some dramatic changes. Many of the industry spokespeople complained that the sky is falling, wincing at any prospect of reform. But the fact is taxpayers have not been getting a fair return for the development of all natural resources for several decades and it’s not just about coal. One of our core principles is that the federal government shouldn’t be giving away public assets. And development of federal coal has been among the worst – if not the worst – in terms of shortchanging taxpayers.

Our testimony focused on the changes that have occurred in the marketplace for coal since BLM last updated the federal coal program more than 25 years ago. One of the biggest shifts is that coal companies are increasingly mining coal from federal land to export to foreign markets where prices are much higher. The program has to adapt to this new dynamic. BLM determines the Fair Market Value of the coal before it sells the rights to mine it, but it has been using the domestic price which undervalues the coal and fails to deliver taxpayers a fair return. What’s more, BLM uses existing leases for reference when it calculates fair market value for subsequent sales, so undervaluing one lease can create a domino effect where future leases are also undervalued. 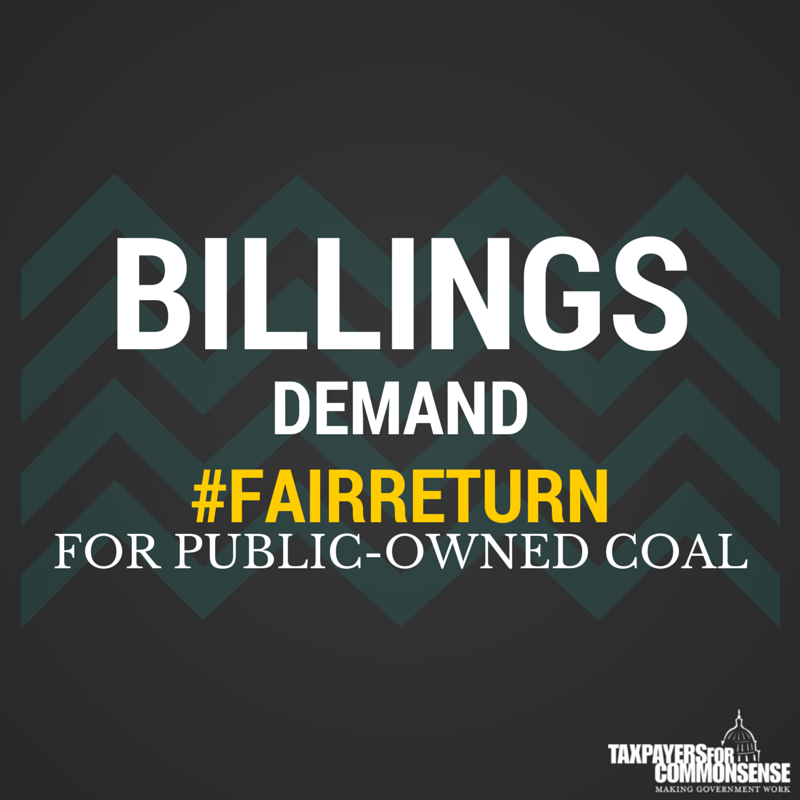 The other problem we focused on in our testimony is the lack of competition for federal coal leases. In 2013, the Interior Department Inspector General (IG) documented that more than 80 percent of the sales for coal leases in Wyoming’s Powder River Basin had only one bid in the past 20 years, and none had more than two bidders. The IG attributed this lack of competition to BLM’s decision in 1990 to discontinue large-scale regional lease sales and use smaller scale lease sales, known as Lease by Application (LBA), to continue or extend the life of existing mines. Under this system, BLM allows coal companies to effectively draw the tracts they want to lease, a process that typically results in tracts that do not generate competitive bids because the location and configuration limit their appeal to other companies.

Before these listening sessions began, we submitted comments to BLM on their proposed changes to the way the value of coal is calculated for purposes of assessing a royalty – another area where federal policies have not kept pace with changes in the market. The royalty rate coal companies pay for the right to mine and sell federal coal – 12 ½ percent – was established in 1920 and needs to be increased to 18.75 percent to be consistent with federal, state, and private royalty rates for other natural resources, like oil and gas.

Coal companies, like their counterparts in the energy sector, whether they be the oil and gas or renewables industries, say the sky is falling whenever the government tightens its resource development plans, and these listening sessions were no different. The price of coal has dropped in recent years because of competition from other energy sources, most notably cheap natural gas. This is how the market works, and it should not be an excuse for keeping outdated policies that put federal taxpayers at a disadvantage. BLM has a fiduciary responsibility to taxpayers to manage our assets appropriately, which means updating the federal resource development programs – including coal – to keep up with the market.