Big budget deficits are back, the Congressional Budget Office (CBO) reported this week. The costly triumvirate of last year’s tax cuts, the budget cap busting budget deal, and the Fiscal Year 2018 Omnibus spending package were fingered as the main culprits for the return of trillion dollar deficits by the official nonpartisan budget Congressional scorekeeper.

CBO delayed the annual release of the Budget and Economic Outlook by a few months so the tax cuts and other recent actions could be included. Good thing too, or we would not have had nearly the sense of the fiscal hole we are in without those being included. Congress would have gone about their spending business without recognizing the challenges until the mid-year update.

What did we find out? Not surprisingly, increased spending coupled with decreased taxation during an economic expansion equals a jump in Gross Domestic Product (GDP). But like a sugar rush, it comes back down after just a few years. Year-to-year real growth is expected to be 3.3 percent in 2018, but drop to 1.8 percent in 2020 and average 1.5 percent in 2021-2022.

This is coupled with a growing budget deficit, the difference between spending and revenues. CBO pegs the FY2018 deficit to be $804 billion – $242 billion more than they projected less than a year ago and $140 billion more than in FY2017. But it doesn’t stop there, the deficit is supposed to top $1 trillion in 2022 – at that point it will be 5.4 percent of GDP. With a growing economy and relative stability that is bad. A lot worse than the most recent estimates for a lot of other developed countries – like say the UK (3.6 percent), France (3.1 percent), Japan (4.6 percent), or especially Germany (positive 0.7 percent) to name a few. 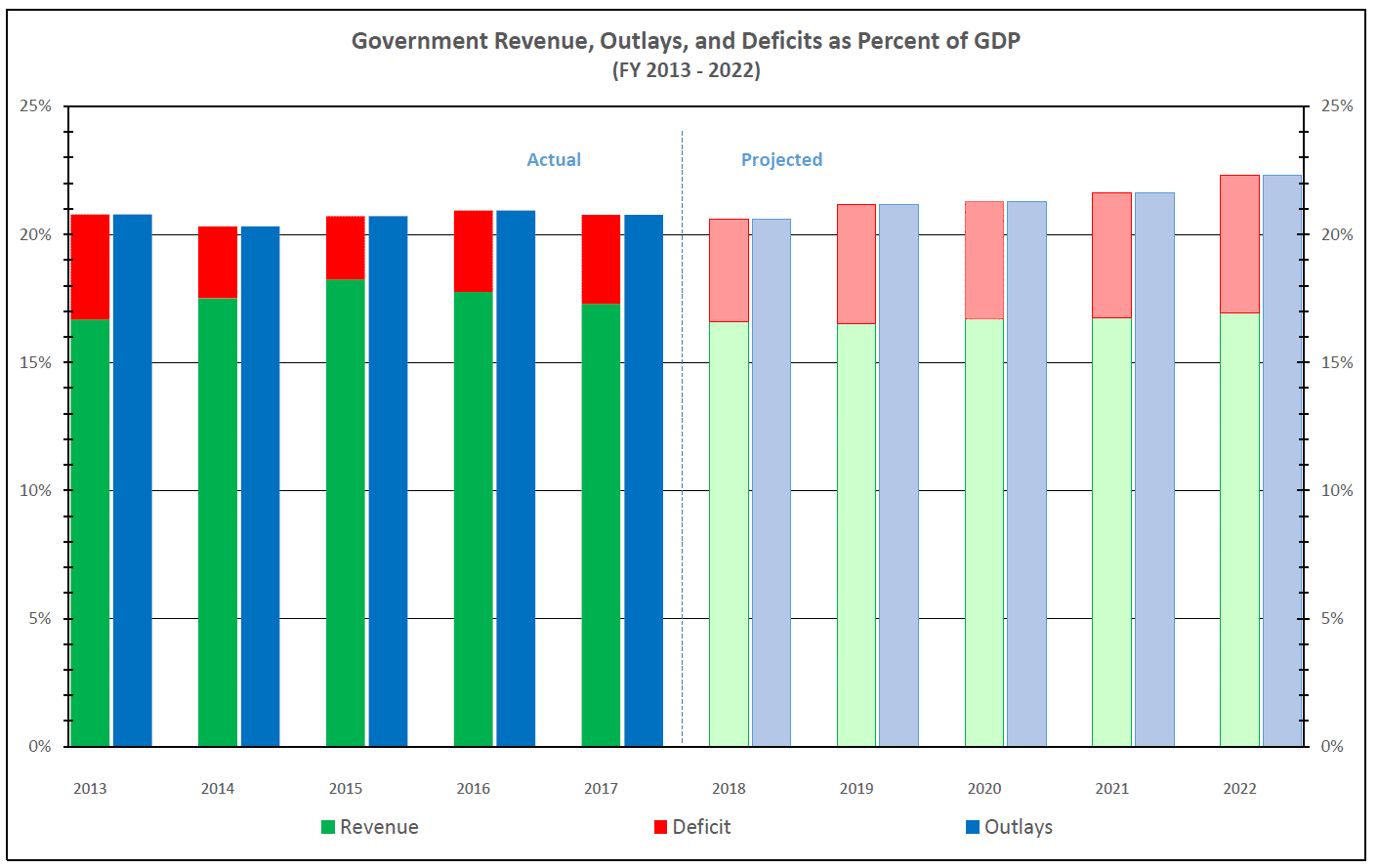 The CBO also revises upward their estimate of last year’s tax law, while recognizing the inherent uncertainty of these projections. The 5-year static score is now $1.445 trillion, $1.226 trillion when you take into account macroeconomic impact. The 11-year score is even more eye-popping – $2.314 trillion and $1.854 trillion taking into account the macroeconomic impact. That’s hundreds of billions more than previously projected.

Then you look over at entitlements. The CBO estimates that the balances in the federal trust funds (like Social Security and Medicare) will increase by $123 billion in FY2018. All right, so far so good. They continue, “income credited to the trust funds is also projected to exceed outlays each year from 2019 through 2021.” Okay, but you kinda get the feeling that there is a “but” coming. Instead it’s a “however”: “However, each year thereafter, spending from the trust funds is projected to exceed income by an increasing amount. All told, CBO projects a cumulative net trust fund deficit of $1.2 trillion over the 2019-2028 period.” Sadly this is not news, just more of what we have heard with the baby boomer retirements coming fast and furious.

RELATED ARTICLE
Trump would like to help the cruise industry. Not everyone who works in the industry thinks that’s a good idea.

Remember we told you that net interest – the money the government pays individuals and other governments to service the national debt – was eating the budget pie. Well, we weren’t wrong. Net interest payments in 2017 were $263 billion, which is set to grow by $53 billion (20 percent) to $316 billion in 2018 on its way to $915 billion in 2028. CBO pegs that total at roughly $150 billion more than estimated defense spending that year. Put another way, net interest grows from 1.4 percent of GDP in 2017 to 3.1 percent of GDP in 2028.

If all that isn’t scary enough, CBO pulled together an alternative scenario. A much more likely scenario in fact. CBO has to assume that present law will stay as it is. For instance, that after the current budget deal expires Congress will live under the previously set budget caps (it never has) and that the tax cuts set to expire will actually expire (unlikely). Assuming a more likely scenario that current policies continue, deficits would be one percent of GDP higher (6.4 percent) and cumulative ten-year deficits would $2.6 trillion higher, totaling $15 trillion. By their estimate, debt held by public to GDP would be 105 percent, something that has happened only once before in our nation’s history.

Clearly, we need to get our fiscal house in order. And soon. The country needs to approach the budget with an all-of-the-above strategy. This week the House rejected a Balanced Budget Amendment to the Constitution. Coming on the heels of the deficit fueled tax cut and budget deal made it particularly hypocritical. Even some members of the Freedom Caucus (a more conservative wing of the House Republican Conference) rejected the package as not being serious. Leaving aside the problems with such legislation, the fact is that it would take many years to get through the painstaking (for good reason) amendment process. (Fun fact: While an enormous outlier, the last amendment to the U.S. Constitution was ratified in 1992 more than 200 years after it was drafted as part of the package of amendments that became the Bill of Rights.)

Congress and the president need to review and reform the recent tax cut so that it is at the very least revenue neutral and not digging our fiscal hole deeper. Either live with the budget caps or fully offset any future amendments. Deal with spending bloat like reining in the farm bill under consideration, not bailout private sector interests for the country’s trade decisions. And make the necessary and responsible reforms to get a handle on entitlement spending growth. This all has to be done in a bipartisan manner. Nothing is durable otherwise.