Fiscal trouble is brewing. Today’s Congressional Budget Office (CBO) Budget and Economic Outlook is as predictable as it is concerning.

The projection shows the logical consequences of the last year’s tax cuts and this year’s spending boosts: an economy with a short-lived sugar high in the form of accelerated growth, leading to slower future economic growth and staggering budget deficits as the nation’s debt grows even larger as share of the economy.

The longer term deficit and debt pictures are likely lower than they will be in fact because the CBO takes into account only current law. And the 2017 tax cut provided that virtually all the individual provisions would expire at the end of 2026. Experience tells us that is unlikely to occur. So like your side view mirror, debts are larger than they appear.

Here are a couple of charts on the deficit to help illustrate our point. 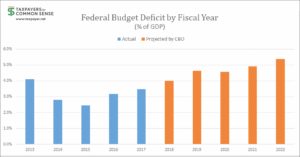 For comparison, here are recent deficit-to-GDP ratios around the globe.

We’ll have more to say on this subject later in the week, but are already going through the information.