When one of the first COVID-19 response bills – the CARES Act – was enacted last March at the beginning of the pandemic, we had this to say about oversight and transparency of taxpayer dollars within behemoth spending bills:

“We know one thing from decades of having reviewed, examined, and conducted oversight of this type of legislation and implementation: oversight matters. And the larger the pot of cash, the more we need transparency and accountability about how your tax dollars are being spent.”

Having worked on the auto bailout, the 2009 stimulus – the Recovery Act, and many other bills that spend trillions of dollars like pocket change, we frequently sound the alarm bell on the potential for future waste of taxpayer dollars. This time around is even more important with the sheer speed at which trillions of taxpayer dollars have been spent in under a year since the COVID-19 pandemic began.

The good news is that ARP funds additional COVID-19-related oversight within Inspector General offices (IGs) at 11 Federal agencies. The bad news is that funding for these IGs would decline from the 2020 CARES Act, both in nominal terms ($75 million in ARP vs. $174 million in CARES) and as a percentage of funds spent on oversight/transparency versus the huge costs of the bills. Even if additional funding is added in for COVID-19 oversight work at both the Government Accountability Office (GAO) and the new Pandemic Response Accountability Committee ($77 million and $40 million, respectively in ARP), ARP still falls short on funding measures to ensure taxpayer dollars are spent wisely and waste, fraud, and abuse is rooted out. As a comparison, the CARES Act appropriated $20 million for GAO and $80 million for the Pandemic Response Accountability Committee. Even if these various pots of money (for IGs, GAO, and the new response committee) are summed up, just 0.01 percent of ARP spending (and only slightly more in the CARES Act) would be spent on oversight, transparency, and accountability of taxpayer dollars. 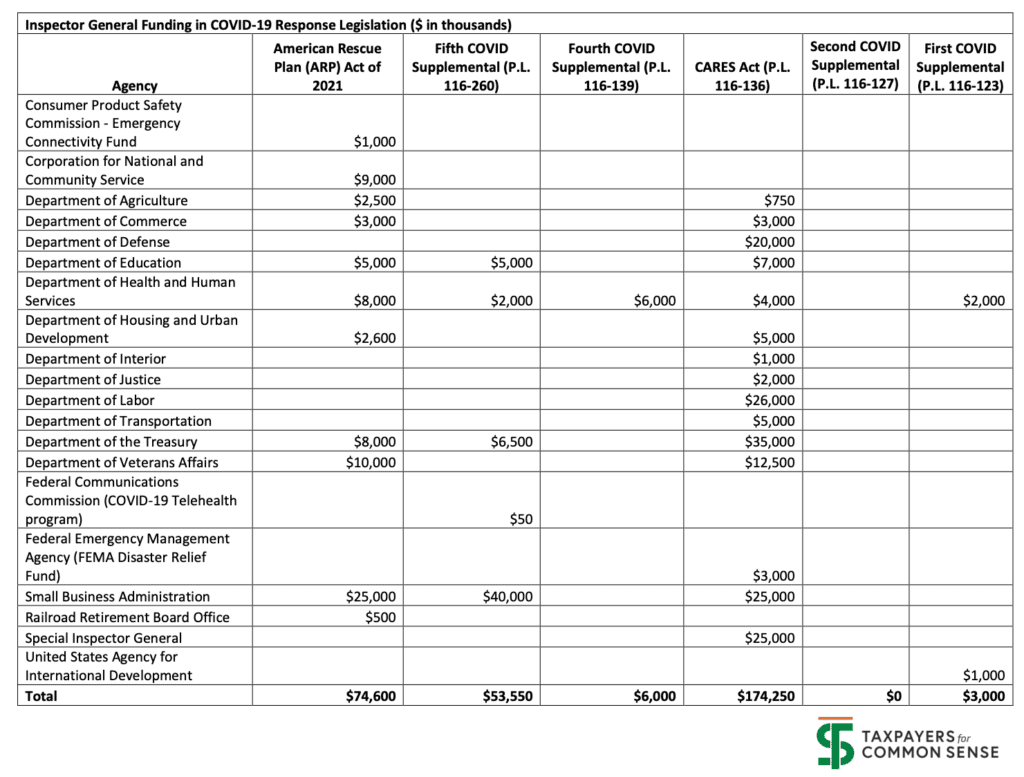