The House Armed Services Committee bill to authorize spending for the Pentagon in Fiscal Year (FY) 2016 includes an issue of concern to us, that we believe should concern all fiscal conservatives: the National Sea-based Deterrence Fund. 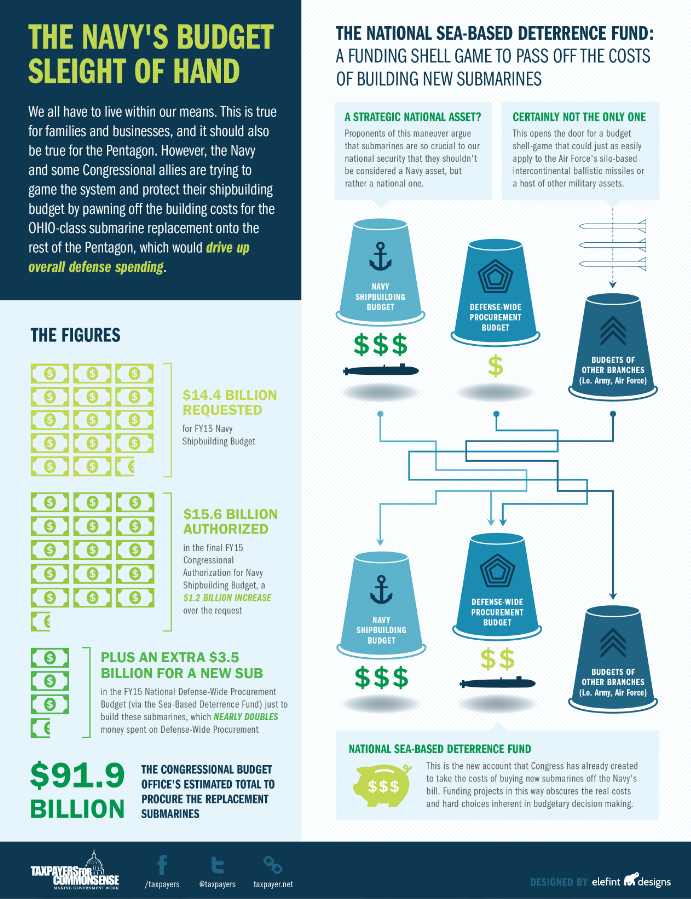 This fund, established in the FY15 National Defense Authorization Act (NDAA), would allow the transfer of funds to the Procurement, Defense-wide account for the replacement of the Navy’s OHIO class of ballistic missile submarines.  Let’s be blunt, the cost of buying submarines belongs in the Navy’s Shipbuilding and Conversion account where all other major sea-based assets are funded. Placing it, instead, in the defense-wide budget potentially masks the huge cost of these submarines. It also means the Navy's shipbuilding account will likely stay at the $14-$15 billion level even without paying for the new submarines. Which means the Pentagon topline is going to go up. The Congressional Budget Office estimate is that the overall costs of the OHIO class replacement is almost $92 billion.

The assertion that ballistic missile subs are “national assets” which should be funded in the Office of the Secretary of Defense is a dangerous slippery slope. This is brought home by the fact the HASC “Chairman’s Mark” expands the definition of what can be purchased from this new fund to include common procurement items in all nuclear powered vessels – like fast attack subs and aircraft carriers. All elements of Pentagon acquisitions are national assets, not just ballistic missile subs or even all nuclear powered vessels. You have to figure the Air Force is looking at this and wondering how they can get a similar fund for the Long Range Strike Bomber or the modernization of intercontinental ballistic missiles.

We produced an infographic explaining the deterrence fund shell game. In addition, TCS President, Ryan Alexander, wrote about this issue for today’s online edition of U.S. News and World Report.

We believe Members of Congress should look twice at this budget gimmick and reject any attempts to either expand the reach of the fund or transfer unobligated balances into the fund.

Unfunded But Not Forgotten

As we have described elsewhere, the newly resurrected Unfunded Priorities Lists from the military services are always interesting reading.

After all, pity the Pentagon, with its FY16 “base budget” request at a mere $534.3 billion. Then add in the measly request of an additional $50.9 billion for the Overseas Contingency Operations (OCO) account for the additional costs of actually waging war. But the House and Senate Budget Committees didn’t think that was enough and added billions more, bringing OCO funding for the Pentagon and State Department up to $94 billion in the FY16 Budget Resolutions. If this level of funding holds, OCO would be the second largest agency in discretionary funding, if it was actually an agency.

All those big numbers tell us the Pentagon should have been able to fund all its most important programs. But the Unfunded Priorities Lists tell a different story. And, just in the Procurement accounts, here is what the House Armed Services Committee (HASC) decided to add from those lists into the Pentagon budget in the “Chairman’s Mark” released earlier this week. 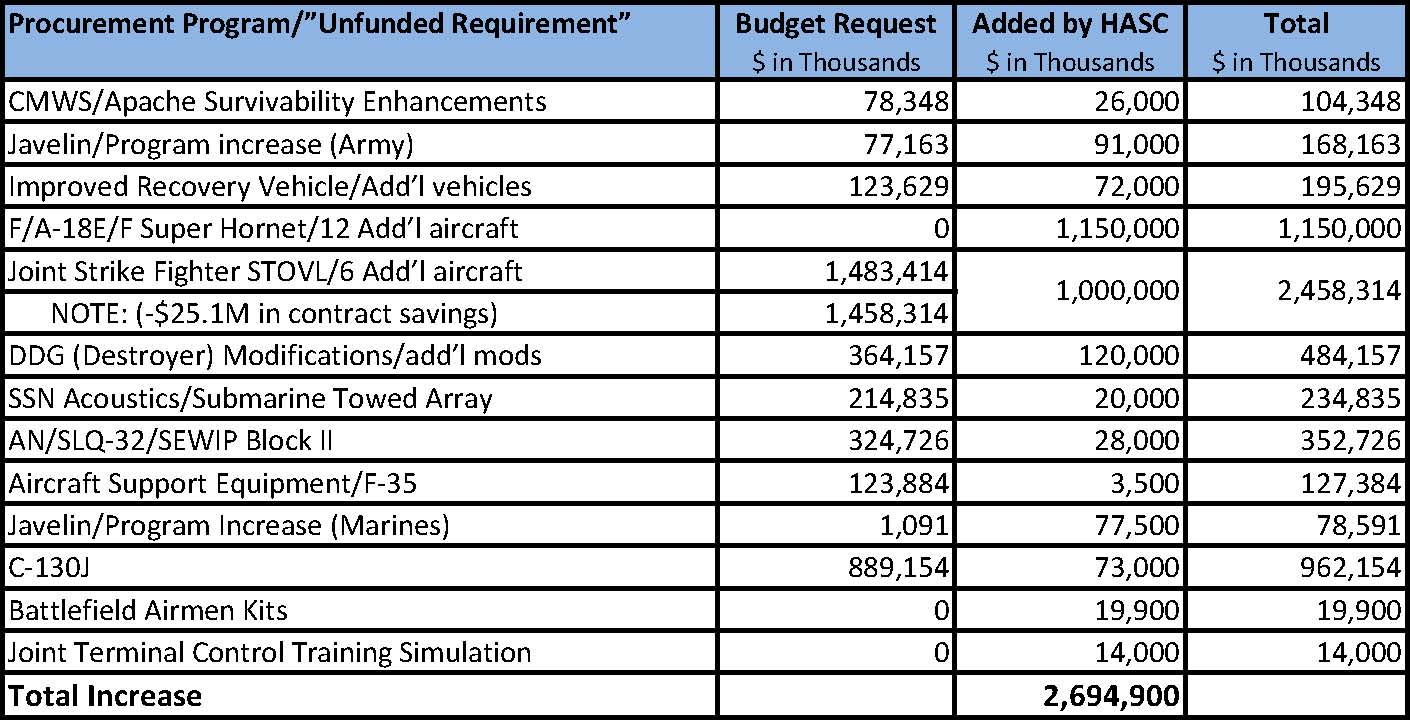 Almost $2.7 billion added from the Unfunded Priorities Lists, just in procurement. Because the Pentagon can’t be expected to meet its obligations within its already enormous budget.

Marines on the Joint Strike Fighter: “Please Sir, I Want Some More”

Maybe it’s just us, given TCS’ affinity for musical theater (remember our Wastebasket, “Some Enchanted Evening?”) but the Marine Corps is starting to remind us of Oliver Twist. Specifically, that scene where Oliver asks for another bowl of thin gruel after a long day, toiling away in the Poor House. Tentatively, he asks his taskmaster, “Please sir, I want some more.”

The Marines always cast themselves as the ugly stepsister (yes, another musical theater reference) to the Department of the Navy, because it’s the Navy that actually buys the aircraft flown by the Marines. And the Marines never feel they’ve gotten everything they need from the Navy. Hence, a common sight in Washington is representatives of the Marine Corps going directly to Capitol Hill and asking for more.

This year is no different with the Marines asking for nine of the short takeoff/vertical landing (STOVL) variant of the Joint Strike Fighter (also known as the F-35B) in the original FY16 budget request. This contrasts with the Navy’s request for only four of the carrier variant for themselves. This is at least in part because the Marines are pushing to meet a doubtful Initial Operational Capability (IOC) of F-35Bs ready to fly and fight sometime this Summer. But it also shows the Department of the Navy is hardly shirking the Marine Corps on aircraft when they devote more than twice the funding in F-35s for the Marines.

But because twice as much is seemingly still not enough, the “unfunded requirements list” for the Marine Corps asked for six more F-35Bs. And the House Armed Services Committee was only too happy to oblige. Six more Joint Strike Fighters for the Marines are added to the Department of the Navy budget, boosting them to a total of 15. And those additional airframes will cost a cool $1 billion more, assuming the Senate Armed Services Committee and the Appropriations Committees go along.

We’ll be watching, and we’ll keep you informed.

Yesterday, the House Armed Services Committee (HASC) released the “Chairman’s Mark” of the annual Defense Authorization bill, setting policy for the Pentagon. From a budget perspective, the rubber doesn’t meet the road on the actual spending of our tax dollars until the Appropriations Committees have their say. But the HASC mark does give us an idea which way the wind is blowing in terms of adding procurement programs where the Pentagon asked for zero dollars.

If we also did a chart showing where all the adds were made to the procurement accounts, it would be significantly larger. This is just the programs where the Pentagon, in a massive budget request of $534.3 billion in base budget and $50.9 billion in Overseas Contingency Operations money, couldn’t find room to ask for a single dollar.

So that’s almost $2.2 billion in procurement programs that aren’t in the Pentagon budget. 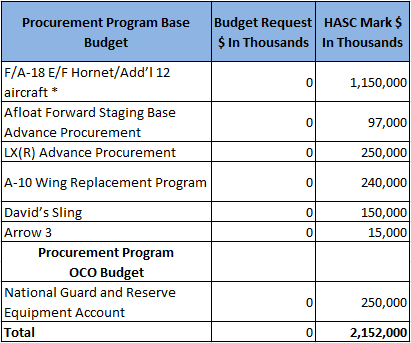