View/Download this article in PDF format.

From 2009 through 2013, large U.S.-based oil and gas companies paid far less in federal income taxes than the statutory rate of 35 percent.

Thanks to a variety of special tax provisions, these companies were also able to defer payment of a significant portion of the federal taxes they accrued during this period.

According to their financial statements, 20 of the largest oil and gas companies reported a total of $133.3 billion in U.S. pre-tax income from 2009 through 2013. These companies reported total federal income taxes during this period of $32.1 billion, giving them a federal effective tax rate (ETR) of 24.0 percent. Special provisions in the U.S. tax code allowed these companies to defer payment of more than half of this tax bill. This group of companies actually paid $15.6 billion in income taxes to the federal government during the last five years, equal to 11.7 percent of their U.S. pre-tax income. This measure, the amount of U.S. income tax paid regularly every tax period (i.e. not deferred), is known as the “current” tax rate.

Four of the companies in this study – ExxonMobil, ConocoPhillips, Occidental, and Chevron – account for 84 percent of all the income and paid 85 percent of all the taxes for the entire group. These four had an ETR of 24.4 percent and a current ETR of only 13.3 percent. The smaller firms paid an even smaller share of their tax liability on a current basis. When the top four companies and those with losses are excluded from the analysis, the remaining companies reported a 28.9 percent ETR on U.S. income, but only a 3.7 percent current rate. They deferred over 87 percent of their tax liability. 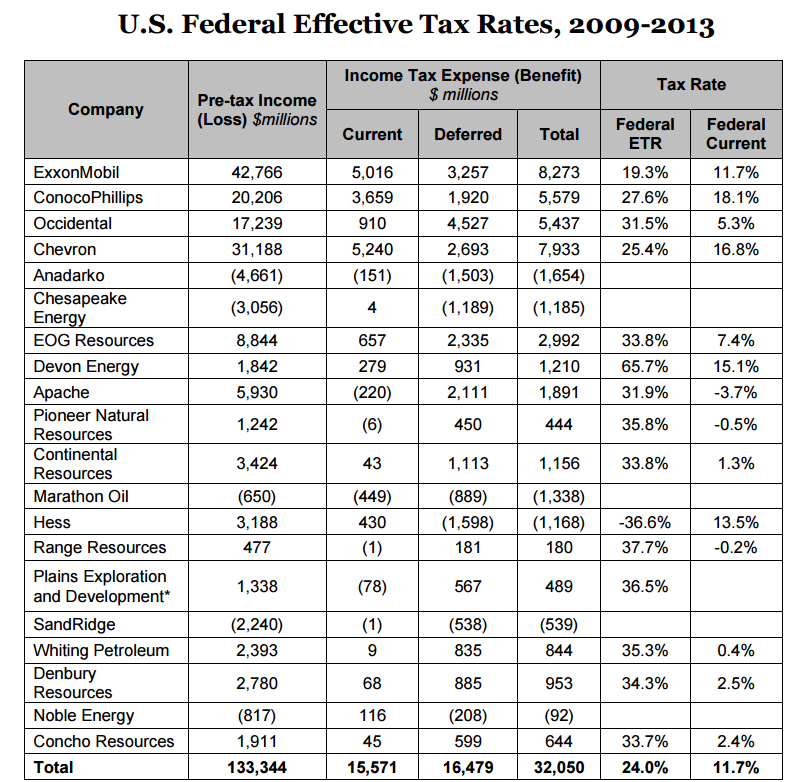