Federal Oil and Gas Leasing: Getting a Fair Return from Rental Rates

Click here to view this report in PDF format.

Federal lands and all the resources within them are owned by American taxpayers. To get taxpayers a fair return for their use or development, Congress has established processes to recover the value of: 1) the use of federal land 2) the exclusive right to explore and develop resources from that land; and 3) any oil and gas resources actually extracted.

To obtain the value of the first of these – using federal land, or rather, preventing others’ use of federal land – the law requires private interests to pay annual rent on each acre they lease. Whether or not this rent is enough to get a fair return on federal land for taxpayers depends entirely on the level and schedule of rental rates. Unfortunately, for taxpayers, rental rates have not kept pace with inflation, losing tens of millions of dollars in revenue every year.

Congress first established a formal system for leasing federal land to develop oil, gas, coal and other resources through the Mineral Leasing Act (MLA) of 1920. For oil and gas leases attained by permit or through competitive bidding, the original MLA set the annual rental rate at, “not less than $1 per acre per annum.”[1] Later amendments to the MLA authorized the Department of the Interior (DOI) to terminate leases for failure to pay rent, return rent overpayments, reinstate terminated leases, reduce rental rates under certain conditions, collect back rent, and much more.

Through later legislation, Congress also enacted changes to the rental rate over time. In 1935, the rent due for oil and gas leases was reduced to $0.25 per acre.[2] In 1960, it was increased to $0.50 per acre.[3] Finally, in 1987, Congress set the current rates at, “not less than $1.50 per acre per year for the first through fifth years of the lease and not less than $2 per acre per year for each year thereafter.”[4] The rent schedule applies to all oil and gas leases regardless of whether they’re issued through the competitive or noncompetitive process allowed in the law.

How much rent is due for  each parcel of federal land is set in the terms of the lease agreement that grants a private entity access to it. DOI, through the Bureau of Land Management (BLM), typically issues new leases comprising more than a million acres of federal land for oil and gas development every year. Small differences in the rental rates that BLM sets in these leases can therefore produce large changes in the total amount of rent collected from leased lands. Low rental rates over the years have dramatically decreased how much rent is collected on taxpayers’ behalf.

BLM currently sets rental rates for all leases at the minimum allowed in the law. Those rental rates, at $1.50/acre and $2.00/acre, are fractions of the rates that have historically been set by Congress. That is, current rates lag the rental rates set in statute in 1920, 1935, 1960, and 1987, when adjusting for inflation. The rate increases in 1960 and 1987 approximately reflected the 1935 rate of $0.25/acre adjusted for inflation at those times, but they now yield less than half that inflation-adjusted rate. (see chart below) 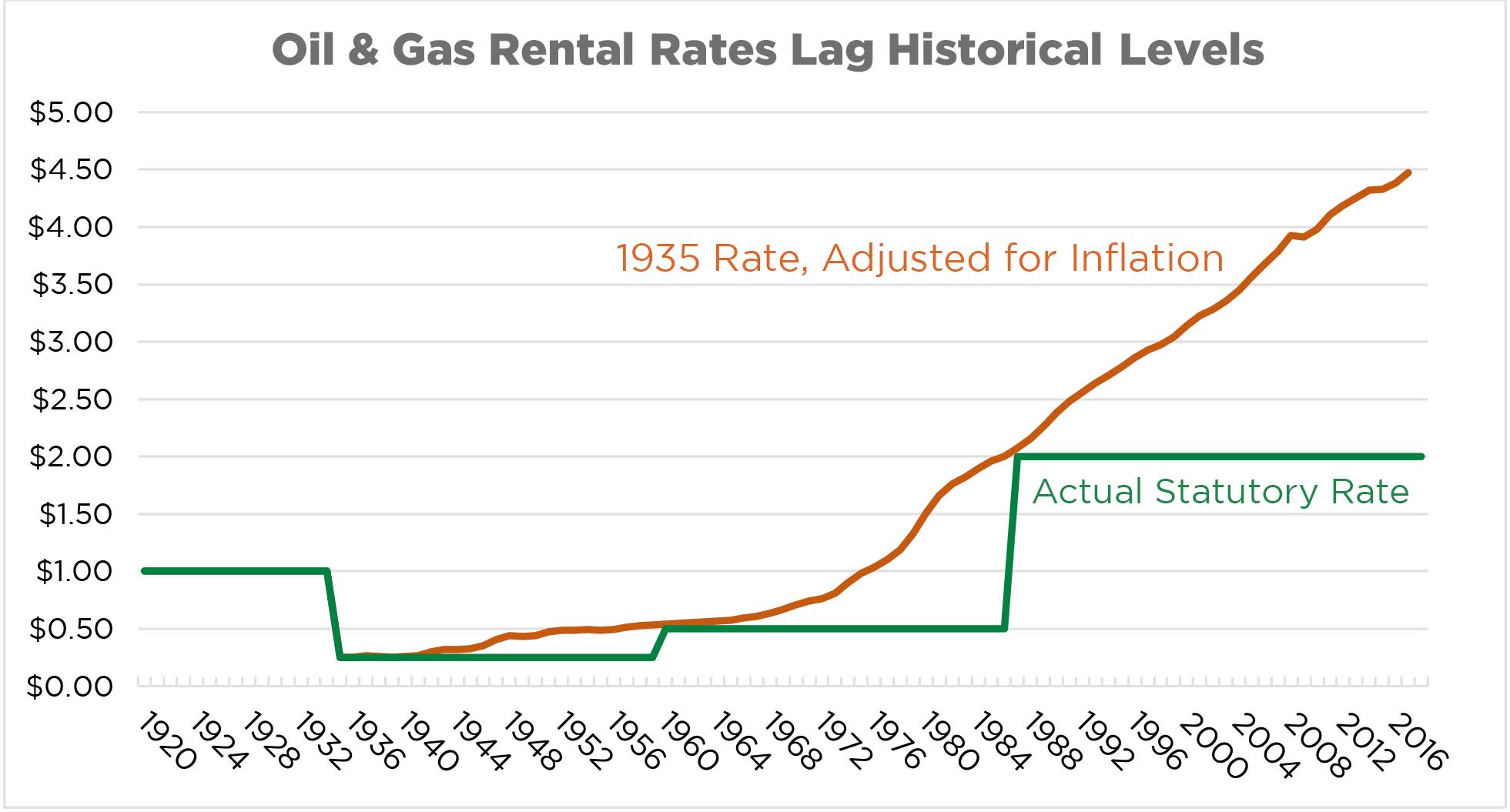 Rental receipts would be significantly greater had rental rates kept with inflation since the last statutory change in 1987. According to inflation measurements by the Bureau of Labor Statistics, $1.50 in 1987 is roughly equivalent to $3.13 in 2017 dollars, and $2.00 then is equal to $4.17 now.[5] The difference means taxpayers are getting as much as 50 percent less than they should from the use of federal land for oil and gas development. That amounts to a loss of roughly $30 million in just one year,  as the following calculations show.

At the end of fiscal year 2017, 25.7 million acres were under lease for oil and gas development.[6] Of those, half were within leases that had entered production, for which rental fees are waived by the royalty payments associated with production. Of the remaining 13 million acres, roughly 30 percent were leased within the previous five years and thereby subject to the lower statutory rental rate of $1.5/acre. Using these acreages, it’s possible to determine how much rent should have been collected, and how much could have been collected under different rates, assuming no change in overall leasing.

Simple math reveals that if Congress had indexed the statutory rental rates to inflation, the BLM could have collected as much as $29.2 million more in FY 2017. Over the last decade (FY2008-2017), the cumulative difference between what could have been collected under inflation-adjusted rates and what was actually collected is more than $440 million.

Huge losses due to low statutory rental rates are not inevitable. BLM has the authority to charge leaseholders more than the minimum rates set in statute. But the agency has failed to take the initiative to raise rates above the minimum levels since 1987. Adjusting them now would immediately yield increased returns, and BLM has several options for policies that would do it.

The BLM could consider adjusting rental fees upward in areas where leases are more valuable, like in the offshore oil and gas program. In recent sales, the Bureau of Ocean Energy Management (BOEM) – BLM’s sister agency for offshore oil and gas management – has imposed rentals that escalate over time to encourage faster exploration and development of offshore leases. For example, for leases in federal waters that are 200-400m deep, the rental rate is $11/acre for years one through five, then an additional $11/acre for each year thereafter, capped at $44/acre in year eight.[7]

Or, the BLM could increase rent by a flat amount on leases that fail to begin production, as several western states have done to encourage exploration and development. New Mexico doubles the rental fee for the second five years of leases issued under 10-year primary terms if the leases have not begun producing, and Texas increases the rental rate from $5 per acre per year to $25 per acre per year if the lease is not developed by the end of the third year.

In 2016, the Congress Budget Office (CBO) examined the effect of implementing a $6/acre fee on onshore, nonproducing parcels. The CBO concluded that assessing the fee, in addition to standard rent payments, would generate $200 million over 10 years and have a negligible effect on production.[8]

Either Congress or the BLM could take steps to ensure that the taxpayers receive adequate value for the lease of federal lands. To ensure millions of dollars aren’t left on the table every year, Congress needs to increase rental rates in statute and index them to inflation. But in the absence of congressional action, BLM can also take regulatory steps to increase the rate above the legal minimum. Regardless of how the BLM goes about it, increasing the rent per acre for federal oil and gas leases would improve overall returns to taxpayers.