Since its creation of the domestic market for corn ethanol after the energy crisis of the 1970s, the federal government has nurtured and maintained the ethanol industry with a steady stream of subsidies. The Farm Bill, a massive piece of legislation covering topics ranging from nutrition assistance to broadband internet, provides government subsidies for the now-mature ethanol industry, including corporate agribusiness giants such as Archer Daniels Midland. Energy title programs enacted as part of the most recent 2014 Farm Bill are expected to cost taxpayers $879 million over the next ten years.[1] 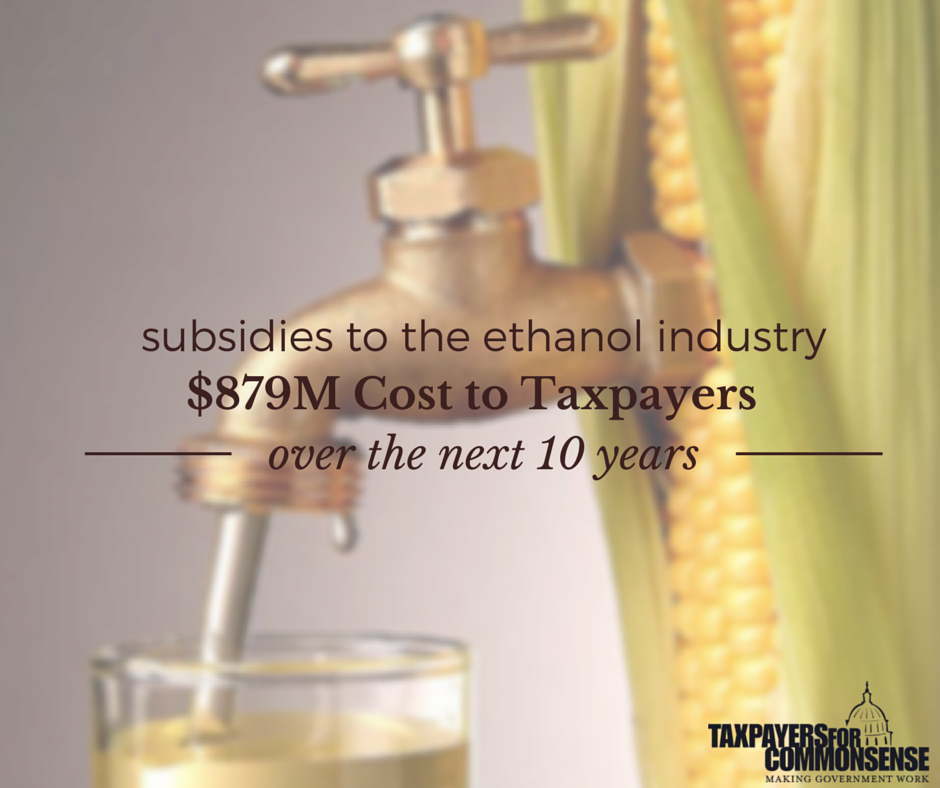 Biofuels and biomass sources were originally sold as a way to help achieve U.S. energy independence, reduce greenhouse gas emissions, and spur rural economic development. The federal government has propped up the biofuels and biomass industries – primarily the mature corn ethanol industry – through billions in subsidies, special interest tax breaks, taxpayer-backed loan guarantees, and a variety of other supports for blender pumps and other infrastructure. Biofuels enjoy a guaranteed market as their production is mandated by the federal government through the Renewable Fuel Standard (RFS).

The ethanol industry includes some heavy-hitters: Archer Daniels Midland, Cargill, POET LLC, and the American Farm Bureau. (Please see the Appendix for a full description of the lobbying entities listed in this fact sheet). These groups use their connections, revolving door lobbyists (those who previously worked for a Member of Congress or federal agency but currently lobby for the ethanol industry), and huge lobbying expenditures and political contributions to increase the market share of corn ethanol.

Table 1 lists total political donations to federal candidates by the corn ethanol industry over the past seven years while Table 2 includes 2007-2014 lobbying expenditures by many of the same organizations. Please note that all information in the following tables and figures was obtained from the Center for Responsive Politics. 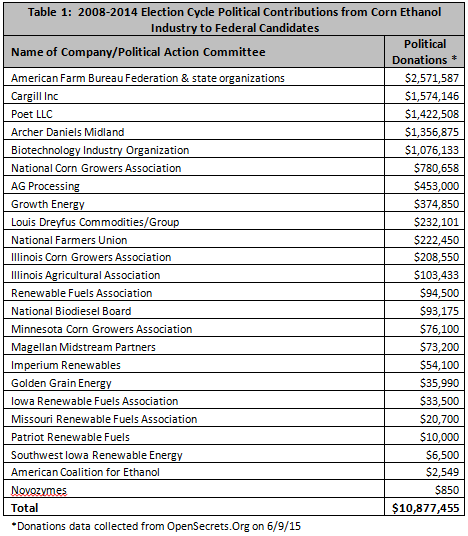 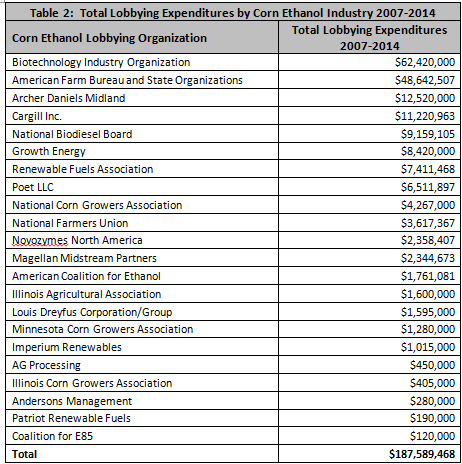 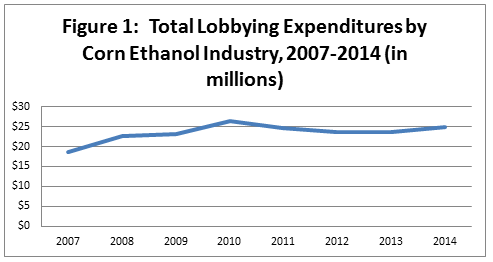 The biofuels industry and their lobbyists influence Congressional and administrative decision making in numerous ways. In 2012, USDA approved a special policy to allow a new type of corn to receive federal crop insurance subsidies. This high amylase corn, also known as Enogen, was developed by the Syngenta Corporation for its sole use in corn ethanol production, who in 2011 reported that it lobbied USDA on biofuels issues, without specifying details.[3] Also that year, the National Corn Growers Association (NCGA) reported lobbying USDA on “new product development” within the federal crop insurance program, without specifying which new policy it urged USDA to approve.[4] In 2014, Syngenta AG and NCGA together spent $1.9 million lobbying Congress, USDA, and other government agencies on corn ethanol and other similar policy issues.[5]

In 2013, Rep. Schock (R-IL) successfully added an amendment to the House farm bill (that was ultimately included in the final 2014 farm bill) allowing farmers to receive new crop insurance subsidies for growing pennycress, a weed being tested for use in biodiesel production. In 2009, Schock met with USDA officials to devise short- and long-term plans to obtain insurance coverage for pennycress.[6] He also secured a $500,000 earmark in FY10 for BioFuels Manufacturers of Illinois (BMI), a Peoria “Demonstration Plant for Biodiesel Fuels from Low-Impact Crops,” which uses pennycress as a feedstock in its production process. BMI contracted with the agribusiness GROWMARK, Inc. “to market and distribute its biodiesel products, including pennycress.”[7]

Rep. Schock was one of the largest recipients of PAC donations from ADM, which is affiliated with Growmark; he received political contributions worth $5,000 from ADM during the 2013-2014 election cycle.[8] Schock also received $2,000 from the National Biodiesel Board in 2014.[9] Schock resigned from Congress in March 2015 amid an impending “Congressional ethics investigation into reports that he used taxpayer money to fund lavish trips and events.”[10]

Sens. Roberts (R-KS) and Donnelly (D-IN) obtained support for the inclusion of new crop insurance subsidies for biomass and sweet sorghum in the 2014 farm bill, crops which will ultimately be used in biofuels production.[11] The Kansas Grain Sorghum Producers Association and the National Sorghum Producers met with Sen. Roberts, former Ranking Member on the Senate Agriculture Committee, prior to consideration of the 2013 farm bill. Taxpayer-subsidized crop insurance for these types of biomass will now receive priority status at USDA.

After more than 30 years of federal support, it’s time taxpayers stop subsidizing the corn ethanol industry. Corn ethanol lobbyists are working behind the scenes to increase their share of federal subsidies through the tax code, USDA, and Department of Energy programs and to increase the number of gallons of corn ethanol that can count toward the federal RFS mandate. With over $18 trillion in national debt, taxpayers cannot afford yet another year of taxpayer subsidies for the mature corn ethanol industry.

Listed in alphabetical order below are descriptions of selected companies and trade associations lobbying for favorable corn ethanol regulations and/or industry subsidies.

American Coalition for Ethanol (ACE):  Since 1988, ACE has worked to “increase ethanol demand by mobilizing grassroots political support for public policies at state and federal levels.”[14] According to its website, ACE represents “more than 1,500 members nationwide, including: ethanol producers, farmers, investors, the agriculture community, industry suppliers, rural electric cooperatives, and others supportive of the increased production and use of ethanol across America.”[15]

The Andersons Inc.:  The Andersons Inc. has several subsidiaries and affiliates, including a Grain Group, Ethanol Group, Plant Nutrient Group, Rail Group, and Retail Group.[17] The Andersons Inc. is the largest equity investor and/or operator of three corn ethanol production facilities in Iowa, Michigan, and Indiana; its subsidiary, The Andersons Ethanol Investment LLC, also entered into a joint venture with Marathon Petroleum Company LLC in 2008 to build and operate a 110 million gallon corn ethanol plant in Ohio.[18] The Andersons Inc. reported record earnings in 2014, with a full-year operating income of $92.3 million, beating its prior best year of $40.6 million in 2013.[19]

Archer Daniels Midland (ADM):  Archer Daniels Midland Company was incorporated in Delaware in 1923, a successor to the Daniels Linseed Co. founded in 1902. It is one of the world’s largest processors of oilseeds, corn, wheat, cocoa, and other agricultural commodities and is a leading manufacturer of protein meal, vegetable oil, corn sweeteners, flour, biodiesel, ethanol, and other value-added food and feed ingredients; ADM also has an extensive global grain elevator and transportation network to procure, store, clean, and transport agricultural commodities, such as oilseeds, corn, wheat, milo, oats, and barley, as well as processed agricultural commodities.[20]  ADM owns nine corn ethanol production facilities in Illinois, Iowa, Nebraska, North Dakota, and Minnesota and was one of the earliest supporters of federal ethanol subsidies.[21] In 2015, ADM took full ownership of corn wet mills in Bulgaria and Turkey, expanding its corn processing footprint and increasing its ownership in another Hungary Facility.[22]

Cargill Inc.:  According to its website, “Cargill is an international producer and marketer of food, agricultural, financial and industrial products and services.” Founded in 1865, their “privately held company employs 142,000 people in 65 countries.”[24]  Cargill owns three corn ethanol production facilities in Nebraska and Iowa.[25]

Growth Energy:  Growth Energy is a lobbying organization representing some of the largest ethanol companies, including POET LLC – the largest corn ethanol producer in the U.S. It began lobbying in 2009, according to the Center for Responsive Politics. In total, Growth Energy represents 87 corn ethanol production facilities, in addition to its 87 associate members which range from state corn promotion groups to agribusiness giants such as Syngenta Seeds.[27]

Magellan Midstream Partners:  Magellan is principally engaged in the transportation, storage and distribution of petroleum products but has also worked with POET, the largest corn ethanol producer in the U.S., to seek federal funding for a dedicated ethanol pipeline running from Iowa to New Jersey.[34] Its asset portfolio consists of:  approximately 9,600 miles of pipeline and 49 terminals; petroleum terminals, which includes storage terminal facilities; and 1,100-mile ammonia pipeline and six terminals.[35]

National Biodiesel Board (NBB):  NBB is a national trade association representing the biodiesel industry in the United States; it is comprised of state, national, and international feedstock and feedstock processor organizations, biodiesel suppliers, fuel marketers and distributors, and technology providers. NBB’s members include companies such as Archer Daniels Midland Company, Cargill, Inc., Louis Dreyfus, and Imperium Western Products. While most biodiesel is currently produced from soybean or other vegetable oils, corn oil is also increasingly being used as a feedstock in biodiesel production.[37]

National Corn Growers Association (NCGA):  Based in St. Louis, Missouri, with a lobbying office in Washington, D.C., NCGA’s mission is to “create and increase opportunities for corn growers.”[38] Affiliated corn growers associations are located in all but two U.S. states.[39] NCGA was one of the earliest supporters of corn ethanol subsidies. The organization continues to lobby for “expand[ing] ethanol usage and production,” maintaining the RFS for corn ethanol, allowing corn ethanol’s market share to expand by allowing corn ethanol to qualify as an advanced biofuel in the RFS, “supporting favorable tax incentives” for renewable fuels and additional incentives for flex-fuel vehicles, infrastructure (i.e. blender pumps), and flexible fuels (i.e. E85), etc.[40]

Novozymes North America:  Novozymes is a biotech company which manufactures enzymes that purportedly increase the efficiency of corn ethanol production.[42] While Novozymes is based in Denmark and employs over 5,800 people worldwide, its North American site is located in North Carolina.[43]

POET LLC:  From its beginnings over two decades ago, POET has grown to become the largest corn ethanol producer in the U.S. Based in South Dakota, POET owns 27 corn ethanol production facilities scattered throughout seven states.[45] POET also owns and operates a cellulosic ethanol facility in Emmetsburg, Iowa, which converts corn stalks, cobs, husks, and leaves into ethanol.[46]

Renewable Fuels Association (RFA):  As a lobbying organization representing 51 ethanol companies, RFA has advocated for additional federal subsidies and favorable treatment of corn ethanol for over 30 years.[47] Its members range from large agriculture cooperatives such as CHS to smaller ethanol producers such as Husker Ag, LLC in Nebraska. On its website, RFA states that it “has been the industry's most forceful advocate for expanding the market for ethanol.”[48]