Hazel. Camille. Hugo. Andrew. Floyd. Isabel. Katrina. Ike. Sandy. Matthew. Harvey. Irma. Maria. The names are different, but the results are the same. Costly damage and loss of life from hurricanes. The Carolinas are facing the latest in this lineage: Florence.

Another thing that hasn’t changed much, but should – federal policies and programs to prepare, mitigate, and recover from these inevitable disasters. As the costs keep piling up, we cannot afford business as usual. Four of the costliest hurricanes in history (totaling $336 billion) have happened this decade. The cost leader (Katrina – $161 billion) was just 13 years ago. And that nearly $500 billion in loss doesn’t include the immeasurable damage inflicted from thousands of lives cut short.

Yet despite this, federal disaster policies remain mired in the past. Uncle Sam is all too willing to whip out the checkbook without any thought to accountability and change. Lawmakers don’t hold the Executive Branch accountable for where the funds are going. No one can tell you what happened with all the Superstorm Sandy funding, the same is true with Harvey and other hurricanes. The saying about the “fog of war” applies to the fog of disaster as well. And instead of an institutional PTSD, there is institutional amnesia.

It’s time to think critically about what disaster spending is needed and how it should be treated in the budget. 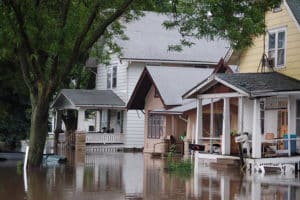 There are legitimate, immediate disaster costs that are covered by the Disaster Relief Fund, such as response, assistance to individuals, and debris removal. These funds are available through FEMA as soon as the president declares a “Major Disaster.” For many disasters, the DRF funds are adequate for the federal response. Others require additional funds on an emergency basis. But unlike after Harvey and Sandy, they should be appropriated out over time as needs become clear and plans are put in place. Otherwise, huge wads of cash are more likely to be wasted and misdirected.

Disasters are also the time to bring clarity to risks and focus to solutions. Every disaster is an opportunity – a tragic opportunity, but an opportunity nonetheless – to make communities less vulnerable and more resilient.

There are a number of common sense steps we should follow to ensure Washington effectively responds to this latest tragedy without making things worse.

Reduce risks instead of increasing them. That means we need to improve mapping so homeowners know the risks they face. Insurance premium rates need to be based on these actual risks. Public subsidies can be used to help those who cannot afford insurance, but subsidies must be means tested. And clearly informing insurance policyholders of the subsidy helps communicate risk. It could be something as simple as a bill stating your premium is ($1,000 – Govt subsidy of $700 = you pay $300). It means policymakers must get out of the way of development of private market alternatives.

The sad truth is many, and likely the majority, of people that Hurricane Florence floods out of their homes, don’t have flood insurance. There are 4.6 million housing units in the state but North Carolinians have only 134,306 NFIP policies insuring $33.7 billion worth of property. South Carolinians have 2.3 million housing units, but only 204,342 policies covering $53.9 billion. We saw last year in Houston that many people who got flooded didn’t have insurance, and North Carolina had a similar experience with Hurricane Matthew two years ago. But this is the devastating, ruinous blow: According to FEMA, after heavy rainfall in Baton Rouge, the average homeowner with flood insurance coverage got $86,500 to rebuild, the average person without got only $9,100 in individual disaster assistance.

Communities can’t simply be rebuilt to pre-disaster conditions. Disasters reveal and underline vulnerability. So rebuild better. That means elevating structures, rebuilding outside the floodplain, and relocations that mitigate risk community-wide. If states and communities want federal support they should be required to build so they survive future disasters better and with less damage. We know there is a risk of flooding, so build to withstand that, at least. If not more. The Trump Administration has continued an Obama Administration effort known as the Federal Floodplain Risk Management Standard, to move in this direction. That needs to be expanded. And communities need to step up in protecting themselves.

Take the time to get it right.

There is a difference between immediate need and rebuilding. And after large disasters there is, understandably, a louder and more urgent call for emergency spending. But taxpayer dollars aren’t endless. Debts have to be paid. Taxpayers, disaster affected communities, and people far removed from the Carolinas who may be the next victim of a devastating flood, wildfire, earthquake, or other natural disaster can’t afford to let lawmakers take advantage of our compassion and desire to help our fellow citizens by loading up any disaster spending bills with extraneous items.

Right now communities in the path of Hurricane Florence need assistance. And they’ll get it.

But when the disaster has passed and the media and Congress have moved on, what we all need is clarity and certainty. Clarity as to the risks we actually face, and the tools we have to reduce these risks. Clarity as to the roles of individuals, communities, and federal taxpayers in deploying and paying for these tools. And certainty that federal disaster policy will be a tool to protect communities and finally put an end to business as usual.

Three Schools Get a Total of $73.5 Million; But Just These Three