The FY19 President’s Budget includes $14.98 billion for cybersecurity-related activities, an increase of $583 million (roughly four percent) above the FY 2018 estimated levels. Because some cybersecurity funding is classified, this amount does not represent the entire U.S. cybersecurity budget.

The Defense Department accounts for the largest share of the total, with a reported $8.5 billion in cyber funding in FY 2019, a $340 million (4.2 percent) increase above current estimates. This funding would include such things as the Pentagon’s efforts to defeat enemy cyber attacks against U.S. forces and the military’s abilities to conduct cyber warfare against existing and potential adversaries.

The Department of Homeland Security has the second largest cybersecurity budget. DHS is the lead federal agency charged with securing the federal government’s civilian information technology (IT) systems against cyber attacks and sharing cybersecurity information with state and local governments. The DHS cyber budget for FY 2019 is $1.7 billion, only about $2 million above current estimates. 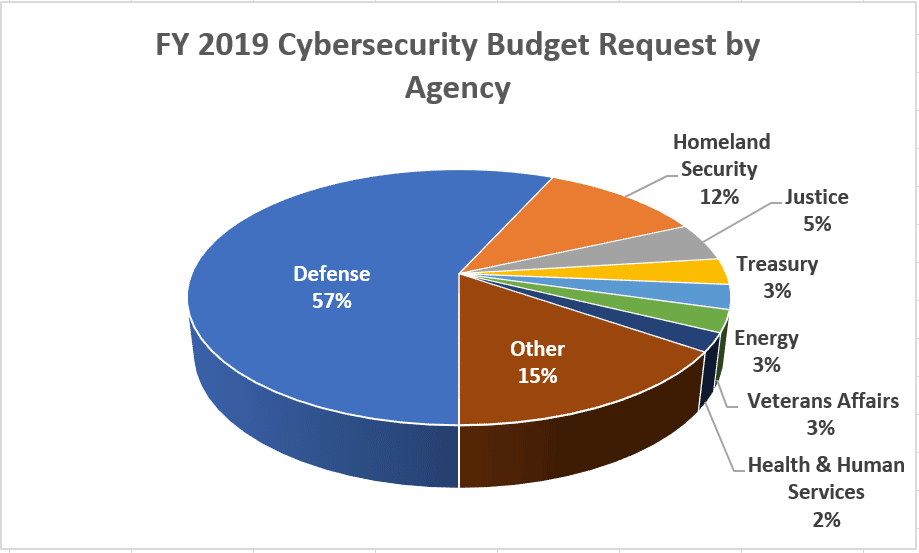 According to the Office of Management and Budget (OMB), over 70 federal agencies included cybersecurity funding in their FY 2019 budgets, since every agency is independently responsible for protecting its IT systems and data from cyber attack.

One federal agency with a relatively small cybersecurity budget that is of special interest is the Office of Personnel Management (OPM).  In June 2015, OPM revealed that as a result of a cyber attack against its information technology systems and data, the personal information of about 25 million former and current federal employees – including information from background investigations – might have been compromised. While the FY 2019 budget request for OPM is only $46.5 million, this represents an 18 percent increase over current estimates.