National Security, BudgetLegacy Weapon Systems and Future Pentagon BudgetsIf they want ideas, we have them.

In preparation for the release of President Biden’s Fiscal Year 2022 budget request, the Department of Defense recently announced an internal review of legacy military systems. It will concentrate on three major areas: the current shipbuilding plan, legacy aircraft and ships, and the nuclear enterprise.

In each of these areas, Taxpayers for Common Sense has created a list of programs to be reviewed. We believe each of these programs could be cut. This would save tax dollars by cutting off funding for systems that are either of declining capability, or that the military services have previously asked to cancel.

Our list is available below and can also be downloaded as a handy, one page chart.

This TCS list identifies several programs the Air Force and Navy have asked to either retire or decommission. When the military services say they don’t need something anymore, Congress should give that due consideration without regard to where the system is stationed or where it’s built. This review of legacy systems is the perfect time to make some of these hard decisions. We’ll be interested to see what the final report recommends.

As always, we use humor to point out some of the more ridiculous aspects of a serious subject. We’re pretty sure that, if you’re old enough, you’re going to hear Herman’s Hermits singing “Hen-uh-ree the Eighth I am, I am…” as you read the cut list itself. Once you’re done with the list (and the earworm) keep reading for further analysis with links to many previous pieces we’ve written on these systems. 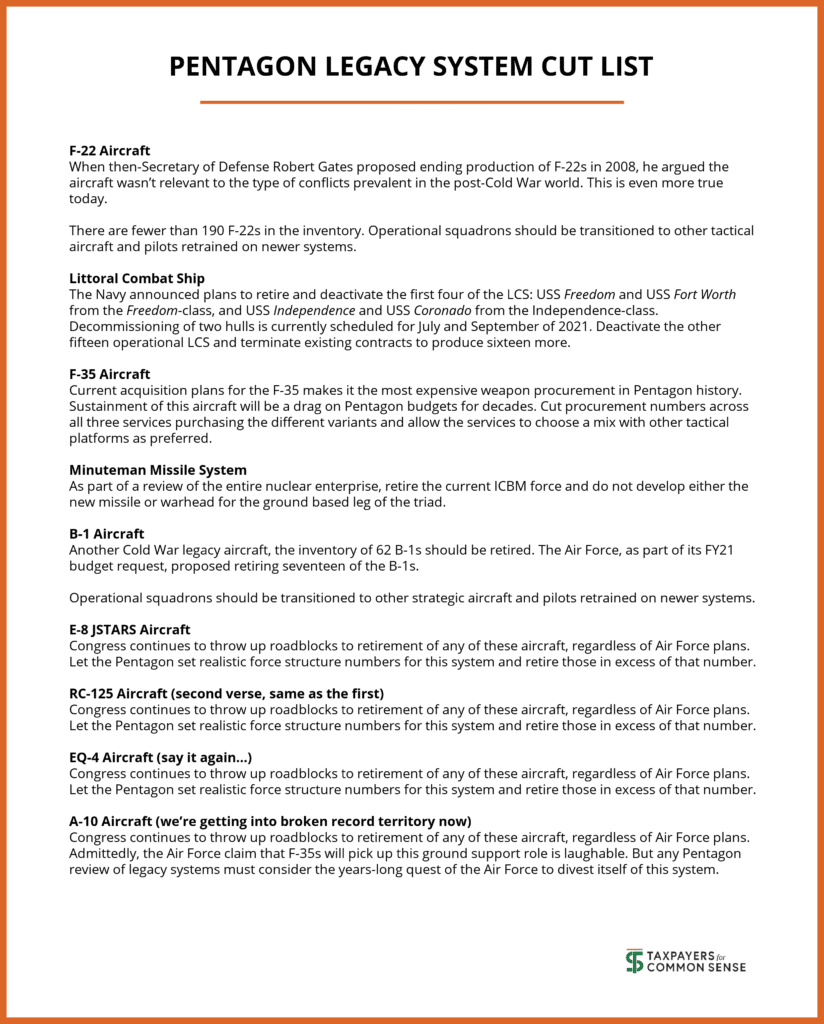 TCS has written extensively about many of these systems. We have also decried the Congressional habit of using the appropriations and National Defense Authorization Act processes to continue systems the Pentagon has asked to be divested of. As Senate Armed Services Committee Chair Jack Reed (D-RI) recently said, “I mean, there are legacy systems which all the services ask us to eliminate and there’s certain reluctance because they’re stationed in our home states or they have an impact. So we’ve got to look, and if there’s a tighter budget we have to look harder, and that’s one of the realities. And it will begin I hope by the president and the secretary of defense sending over a budget that really looks at cost savings that we can achieve, functional improvements.” (Emphasis added)

Meanwhile, if the Pentagon reviewers are looking for ideas, we have them.