Military Construction Projects in Europe: the Camel’s Nose Under the Runway

Remember the European Deterrence Initiative (EDI, nee the European Reassurance Initiative) – the budget ruse that is just another way of paying for projects that should rightly be funded as part of our commitment to NATO? Well it’s getting bigger.

Originally just under a billion dollars, it’s now ballooned to $6.5 billion. Add on the fact that the Trump Administration is requesting this money in the off-budget Overseas Contingency Operations (OCO) account, and it’s clear what’s going on here. The Pentagon is looking for ways to spend this large chunk of change, and paying for basic military requirements in Europe with this “magic” money that doesn’t count against the budget caps – but most assuredly increases our deficit – must seem like a no-brainer.

Let’s drill down to one “small” aspect of the EDI request, military construction. Building a runway or a storage facility or a railhead is not something that can possibly be called a contingency with a straight face. Please peruse the table documenting the roughly $700 million in military construction that is part of the Fiscal Year 2019 EDI request. 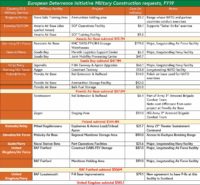 Altogether, $828.5 million of your tax dollars are proposed to be spent on overseas military construction from this off-budget account. And many of these dollars are being spent at major, longstanding, American facilities in Europe. These are most likely projects that should be funded through the normal “base” budget process, requiring greater planning and Congressional oversight.

To illustrate, here’s a second table that shows military construction spending in the FY19 request in three buckets: base budget, “regular” OCO, and OCO/EDI. We ranked it using the base budget number and showing, from most to least, the U.S. state or foreign country where the project is located.

Another interesting fact: the base budget request for FY19 has zero military construction projects in Poland. But the off-budget EDI? $144 million at 3 different bases: Powdiz, Swietoszow, and Zagan. Again, we did the math for you and unless you live in California, Maryland, Missouri, North Carolina, Hawaii, Alaska, Massachusetts, New York, Oklahoma, Florida, Maine, Virginia or South Carolina, you’re not going to get as much military construction as Poland.

We certainly don’t have access to all the data and intelligence that goes into developing the budget request. But we read the budget requests, and we puzzle out what they seem to mean, and we look for other data so we can make comparisons and draw some educated conclusions. And this looks like the Pentagon making hay while the sun shines. The President’s Budget Request for the Pentagon is just about $700 billion when you add up the base budget and OCO. And to get to such a huge number, you have to fund things that weren’t considered high priorities in the past. And if you can do it “off-budget” to get around budget caps, so much the better.

Sorry Mississippi. At $4.5 million in military construction, you get less love than Bulgaria ($5.2 million).

The House and Senate passed the Military Construction appropriations bills with no serious public discussion of these issues. At TCS we believe this is just the camel’s nose under the tent. (Or runway.)