4 Examples Of Corporate Welfare In Action

4 Examples Of Corporate Welfare In Action

While corporations are often painted as the independent drivers of the U.S. economic system, the beacons of small government success aren’t always void of government help, with some reaping success at the hands of taxpayers.

In 2012, the government spent just shy of $50 billion on public service programs, including food assistance and social welfare operations: that’s compared to the $92 billion the government spent on corporate welfare programs, funds issued through tax breaks, subsidies and grants to some of the nation’s most prominent businesses.

Below is a list of the best (or worst) companies and industries accepting tax breaks and funds to fuel corporate profits, while at the same time standing up for a free market system and shunning a “nanny” state government that doles out tax dollars to those who don’t need it.

As pointed out by the CATO Institute, the U.S. government spent $92 billion in private-sector business subsidies back in 2006 — and it hasn’t lost its taste for corporate welfare just yet.

1. Wal-Mart: The nation’s largest retail outlet is passing its tax bill down to the American public in more ways than one.

A more blatant example of Wal-Mart’s delight in public funds came through a taxpayer-funded control tower at an airport that houses Wal-Mart’s cargo corporate fleet. According to Bloomberg News, a spending bill approved in 2011 halted measures that would have taken away government-funded controllers for Wal-Mart’s jets in Rogers, Arkansas.

Airports the size of Rogers Municipal Airport in Arkansas typically aren’t required to have their own control towers. But because the airport hosts Wal-Mart’s fleet, ushering in plenty of traffic, it is required to purchase the traffic controller, and pay costs associated with the airport that essentially serves as Wal-Mart’s own public (but really private) airport. The airport is slated to spend $81,000 this year for the tower.

“In this time when we’re trying to reduce deficits and find smart ways to cut what we’re spending, here we are essentially giving a subsidy to a private corporation under the guise of air traffic control,” Eric Zimmerman of Washington’s Taxpayers for Common Sense told Bloomberg.

2. The oil industry — ExxonMobil, BP, ConocoPhillips, Chevron and Shell, to be precise 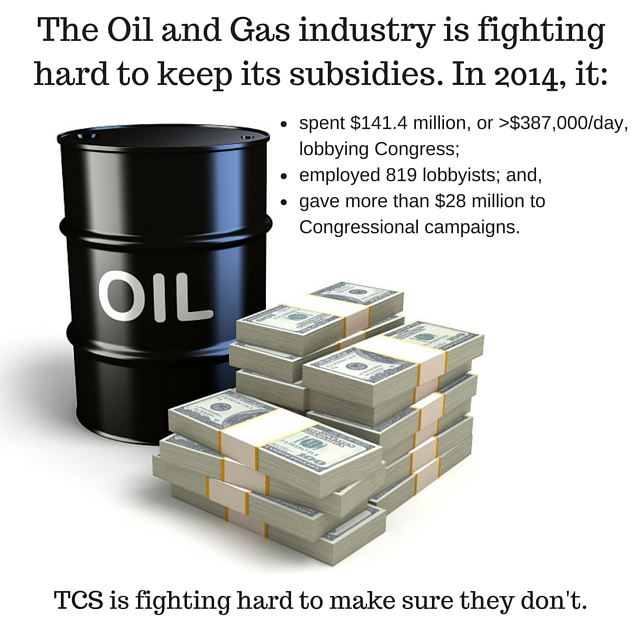 While conservative rhetoric focuses on the clean energy industry, highlighting government-funded failures like Solyndra as proof of government efforts to hoist up an industry that profits greedy green entrepreneurs, millions in subsidies for oil companies are swept under the rug.

The top five oil companies — ExxonMobil, BP, ConocoPhillips, Chevron and Shell — receive a combined $4 billion in tax breaks each year, and that trend is likely to continue. While rationale indicates the tax breaks trickle down to the consumers, prices have risen over the last few years, despite increases in domestic oil production through new fracking technology.

According to the Center for American Progress, Americans saw an 11 percent increase in gasoline prices in one year. In 2012, the average household spent just shy of $3,000 on gas, reaching the highest level in four years.

Meanwhile, oil companies continue to rake in record profits. In 2012, the oil companies, in combination, earned $118 billion in profits, with $72 billion in cash reserves.

On the flip side, Solar-power company Solyndra received $535 million in a federal loan through the Obama administration. After the company went bankrupt, it wasn’t able to pay that loan back. This is what many Republicans have labeled as a government “scandal,” one that used taxpayer funds to help green business get rich quick.

RELATED ARTICLE
The Much Misunderstood Tariffs And Trade War

Op-ed columnist Joe Nocera, writing for the New York Times, disagrees. He claims the premise of the federal loan program is to take risks, and that not all projects pull through.

“Most electricity today is generated by coal-fired power plants, operated by monopoly, state-regulated utilities. Because they’ve been around so long, and because coal is cheap, these plants have built-in cost advantages that no new technology can overcome without help,” he wrote. “The federal guarantees help power the cost of capital for technologies like solar; they help spur innovation; and they help encourage private investment. These are all worthy goals.”

Despite the back-and-forth between both sides of the political aisle, the difference in taxpayer-funded subsidies to the oil industry far outweighs those enjoyed by the green [industry] — by the billions.

Throughout the course of the Iraq War, Haliburton, once headed by former Vice President Dick Cheney, made just shy of $40 billion in taxpayer-funded government contracts associated with the Iraq War.

Altogether, government contractors made $138 billion in taxpayer funds for work carried out through the Iraq War, representing a significant portion of government funds working on behalf of private industry.

KBR, owned by Halliburton, was the top recipient, earning many of those contracts through controversial no-bid processes, including one 2010 deal that paid the company $568 million to provide housing, meals and bathroom services to U.S. soldiers. That contract was later subject to an investigation and Department of Justice lawsuit.

According to International Business Times, the Commission on Wartime Contracting in Iraq indicated contractor corruption cost the government $60 billion, with some companies being paid to do services they never accomplished — instead, those jobs were done by U.S. servicemen and women.

The Army alone increased its reliance on government contractors, increasing annual spending to $5 billion a year between 2001 and 2010, compared to its $200 million prior to that, according to the Christian Science Monitor.

A less-known government subsidy program is giving taxpayer-funded grants to some of the nation’s most well endowed businesses, without debate by the general public.

As noted by the CATO Institute in its report, The Corporate Welfare State: How the Federal Government Subsidizes U.S. Businesses, the organization points out that companies earning Advanced Technology Program (ATP) grants are eating up significant portions of the federal budget.

Created in 1988 to aid technological innovation, companies have been receiving funds to venture into new technological territory. Yet according to the CATO Institute, many companies have used the free money as a way to boost business forward, without first looking into other ways to fund projects. The U.S. Government Accountability Office indicates 63 percent of companies applying for ATP grants are doing so without first attempting to fund projects.

On the top of the list? Fortune 500 companies IBM, General Electric, Honeywell, XEROX and Dow Chemical. IBM alone has received $49.2 million in ATP grants, followed by General Electric with $32.2 million and Honeywell with $29 million.

According to the Heritage Fund, the ATP program, as of 2005, had cost taxpayers $2 billion in total: 40 percent of funds went to Fortune 500 companies. Currently, the cost to taxpayers for the ATP program is $70 million annually.