This week the House of Representatives will take up a slightly amended version of the Pentagon spending bill for Fiscal Year 2017 – yes the fiscal year that is already five months gone.

But, let’s not dwell on the lack of timeliness. Instead, let’s first talk about the amount of money involved. Overall Pentagon spending is set at $583.7 billion, exactly $1 billion more than President Barack Obama requested.

Of that total, $516.1 billion is in the “base” budget and $61.8 billion is in the separate war fund or “OCO” account. Of course those two numbers don’t add up to the overall total and, in fact, an additional $5.8 billion in war funding is also in a supplemental provision amending the existing continuing resolution funding the Pentagon through the end of April.

So that covers the amount of money the Pentagon would receive in the current fiscal year. You would think, at least we certainly think, that in an overall budget request of $582.7 billion that was submitted by the Obama Administration way back last February, the Pentagon would have room to request all the programs military leaders believe are necessary to meet the mission.

But, the Congress never seems to agree.

As we always do, TCS spent some time reading through the bill and all the accompanying tables – so you don’t have to. We created a chart showing all the instances Congress added money to a program that had zero dollars requested by the Pentagon for FY17. 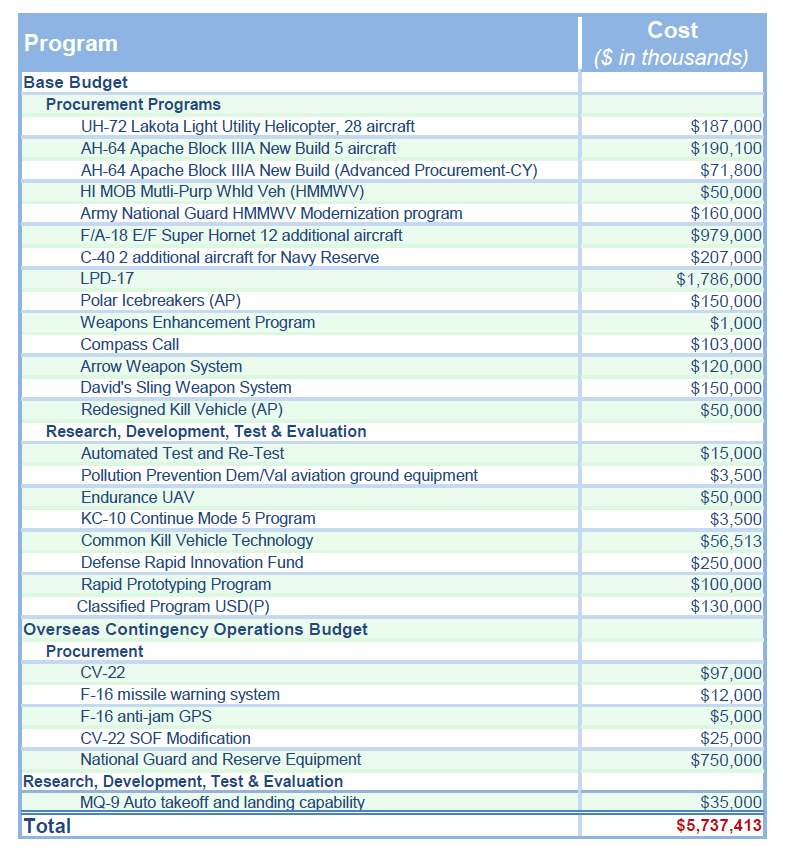 This most recent version of the bill includes more than $5.7 billion for programs where the Pentagon requested not a single dollar. The original House Appropriations Committee version of this bill actually added $6.7 billion for unrequested programs. (We’re pretty sure the programs in that extra $1 billion are going to show up in the supplemental appropriation for the Pentagon, and we’ll be watching for that.)

The two biggest recipients of this largesse are for an unrequested amphibious ship, the LPD-17 for a whopping $1.8 billion and just under $1 billion for 12 additional Navy Super Hornet aircraft. At TCS we have often touted the idea that more Super Hornets could bridge the gap to the future of unmanned aircraft for far less money than the monstrously expensive F-35 program. But the trick to saving that money is you have to stop buying the F-35. Not both.

An additional $5.7 billion is real money. All taxpayers should be concerned when that much money is been shoved into a Pentagon spending bill for unrequested programs.