ReportFiscal Benefits for Strengthening Conservation ComplianceConservation standards must be updated to ensure accountability to the taxpayer.

Read the full report as a PDF.

At the time, federal farm safety net programs came with few strings attached, resulting in taxpayers bearing the financial risks for some producers that chose to expand cropland acreage by draining wetlands, plowing native grasslands, or operating on highly erodible land (HEL). Under this new “conservation compliance” requirement, however, a quid pro quo was enacted. In order to participate in income safety net programs, agricultural producers were prohibited from draining wetlands (known as “Swampbuster”) and could only plant on HEL acreage after crafting a conservation plan in conjunction with USDA’s Natural Resources Conservation Service. In the 30 years since enactment, significant environmental gains (such as reductions in soil erosion) have occurred,[1] and a majority of farmers agree that best management practices should be tied to farm subsidy eligibility requirements (see figure to the right from the Environmental Working Group).[2] Building on this success and support from farmers, the 2014 Farm Bill made conservation compliance requirements a condition for participation in the federally subsidized crop insurance program—a requirement that had been severed in 1996. 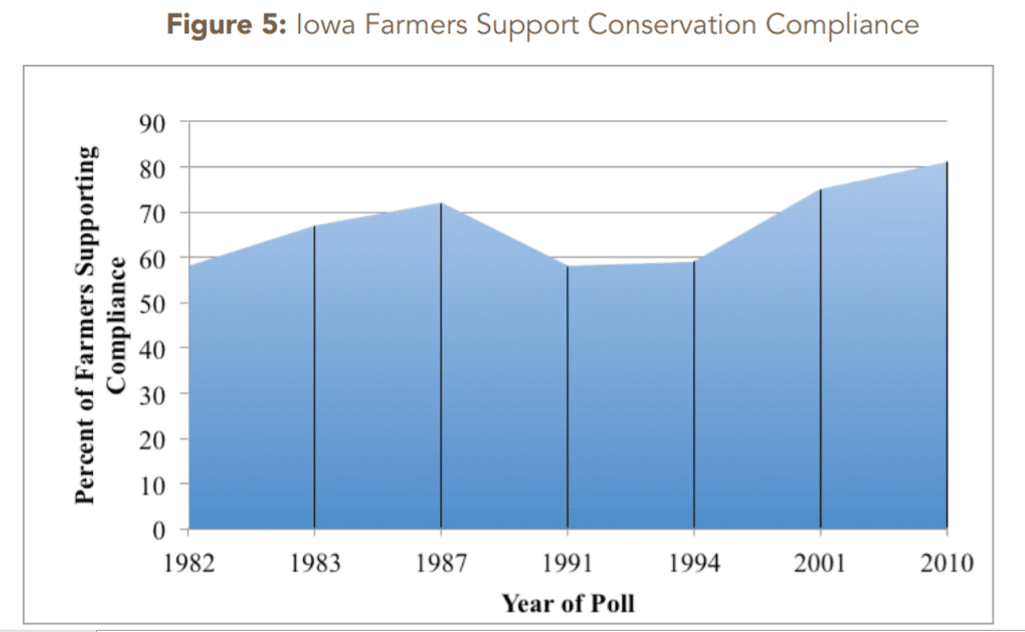 However, as several independent analysts have documented, these standards are not being implemented, monitored, and enforced equitably across the country. This has resulted in the underlying conservation standards being rendered meaningless in certain states and counties, meaning taxpayers bear the financial risks associated with economically risky and environmentally damaging planting decisions, such as draining wetlands and converting native grasslands to subsidized crops such as corn and soybeans. These impacts result in greater soil erosion, water pollution, greenhouse gas (GHG) emissions, and other negative consequences which increase costs for both consumers and taxpayers. If conservation compliance standards are to effectively conserve wetlands and limit soil erosion, while reducing costs for federal programs, they must be updated to reflect today’s economic conditions and be effectively implemented and enforced.

Otherwise, agricultural income subsidies will continue to work at cross-purposes with other federal programs and waste taxpayer dollars in the process.

Producers of most major U.S. crops are potentially subject to conservation compliance standards given their participation in one or more federal farm safety net programs. Most producers of livestock forage crops – such as pasture and alfalfa – are not required to implement conservation plans (since they generally do not receive taxpayer subsidies, aside from a small number of acres enrolled in the Federal Crop Insurance Program). However, given that only certain types of land require conservation plans (for HEL in particular, in addition to conserving wetlands), the percentage of farm land actually impacted by the requirement is much smaller. Details of the requirements include the following: 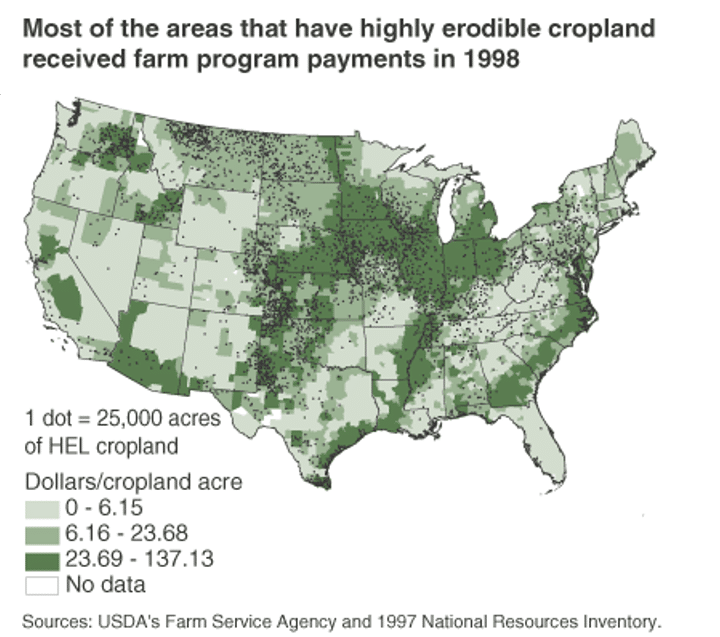 At least in theory, this quid pro quo results in taxpayer subsidies being contingent upon producers meeting certain basic soil and water conservation standards. If producers are not implementing best management practices, regulations are in place to send their subsidies back to taxpayers. This way, taxpayers get a better return on their investment instead of subsidies working at cross-purposes with other federal programs aimed at improving air, water, and soil quality. If strengthened and implemented properly, conservation compliance can help reduce soil erosion, conserve wildlife habitat, build soil carbon, reduce GHG emissions, improve both local and downstream water quality, and enhance recreational opportunities. These benefits result in billions of dollars in lower water treatment costs, less bottled water purchases, better public health, and improved economic opportunities for industries relying on clean water such as fishing, boating, etc.

While conservation compliance currently does not specifically require producers to implement practices to improve water quality by reducing nitrogen fertilizer runoff that leads to water pollution, for instance, requirements could be updated to better reflect current market realities and agricultural production practices. For instance, as USDA-ERS has noted, high cropland prices from 2007-13 may have incentivized farmers to plow up more sensitive acres such as native grasslands and drain more wetlands, despite conservation compliance requirements.[17] While some price increases were caused by the 2012 drought limiting crop supplies, the availability of commodity, biofuels, and crop insurance subsidies also reduces risks that producers face, resulting in taxpayers subsidizing agricultural production on risky acres without effective monitoring and enforcement of conservation compliance standards (see next section for more details).

When producers increased corn planted acres, for instance, after record $8-per-bushel corn prices in 2012, millions of acres of native grasslands and wetlands were lost as corn acres reached record levels of over 90 million acres. Because corn is one of the most input-intensive crops, nitrogen fertilizer applications also increased with those new acres. To make matters worse, USDA-ERS estimates that two-thirds of U.S. cropland acres do not meet best management criteria for nitrogen fertilizer applications.[18] When nitrogen leaches through the soil via underground tile drains and eventually into nearby waterways, not to mention wind and water erosion,[19] it eventually pollutes water that Americans rely on for drinking water, fishing, recreation, and other industries. While conservation compliance requirements have historically focused on reducing soil erosion and the draining of wetlands, they also indirectly affect the amount of pollutants entering water supplies. In a 2010 poll, 70 percent of Iowa farmers indicated they would support conservation accountability standards being extended to address nutrient/fertilizer runoff problems in addition to limiting erosion on HEL and protecting wetlands.[20]

If updated to reflect current realities, more effective conservation compliance standards could help reduce significant consumer and taxpayer costs tied to risky agricultural production decisions. Just a few of the costs that could be mitigated with more widespread use of effective best management conservation practices include the following, not to mention better long-term productivity of the land which improves producers’ bottom lines:

– In May 2017, the utility announced plans to spend $15 million to upgrade and expand its facility to remove unhealthy levels of nitrates from drinking water.

– While it is difficult for researchers to project the financial benefits that healthy ecosystems provide (since many are not traded on markets), a World Resources Institute study estimated the value of global ecosystems at $33 trillion.

– The Ohio River Basin Trading Project is an example of a “payments for ecosystems” services program that aims to quantify water quality benefits arising from lower phosphorus and nitrogen pollution. The market-based approach, which began in 2014 in IN, OH, and KY, allows utilities to purchase nutrient reductions from farmers to reduce their cost of treating polluted water.

RELATED ARTICLE
A Seat for Taxpayers on the Ag Committee

While conservation compliance standards were successful in reducing soil erosion decades ago, independent analysts have found that current standards have not been effectively implemented and enforced as required by law. Without the threat of losing subsidies, some producers engage in risky production practices (such as draining wetlands) that occur at taxpayer expense. Both USDA’s Office of Inspector General (OIG) and GAO have concluded that the standards are enforced inconsistently from county to county, and taxpayer subsidies have been paid to farmers even though they have failed to meet the basic best management practices. Just a few of these reports’ findings include the following:

For these reasons, “in 2007, USDA’s National Resources Inventory (NRI) data shows [that] 54 million acres of highly erodible land had estimated soil losses above the tolerance or “t” level (the highest level that can be sustained without threatening long-term soil productivity)” in addition to 48 million acres of non-highly erodible with unsustainable rates of soil erosion.[40] In states like Iowa, the soil erosion rate has actually increased in recent years with record plantings of corn and other crops. The Environmental Working Group and the Iowa Daily Erosion Project at Iowa State University estimate millions of Iowa cropland acres have unsustainably high soil erosion rates without even accounting for erosion from gully runoff (narrow bands in hilly fields that fill with water during heavy rains). In nearby Nebraska, USDA recently announced that it will start requiring farmers to install additional conservation practices – such as grassed buffers, terraces, etc. – on highly erodible land with gullies to combat problems with soil erosion and water pollution.[41] In the past, conservation practices were only required if erosion wa

s found to cause downstream damages. Without all states and counties enforcing the minimal soil and wetland standards consistently and effectively, farmers will continue to reap generous subsidies while causing downstream costs and additional burdens for taxpayers and the public.

With conservation compliance standards now over 30 years old,[42] it is time to revisit them to better ensure that taxpayer subsidies are not being used to incentivize risky production practices or cause unintended consequences and costs for everyone from residents in Des Moines, IA, to fishermen in the Gulf of Mexico. Not only should Congress ensure that soil and wetland conservation requirements are met, but farm subsidy accountability standards should also be expanded to address current environmental challenges. Otherwise, federal agriculture subsidies will continue to work at cross purposes with other federal programs aimed at protecting water, air, soil, and wildlife habitat. The next farm bill must prioritize the following principles/recommendations to ensure farm subsidies are more accountable to taxpayers:

If these recommendations are implemented, not only will taxpayer dollars be spent more wisely, but agricultural producers will also be more productive in the long-run. Other incentive structures could also be considered in the long-term, such as shifting U.S. agricultural subsidies toward performance-based payments which are more cost-effective than the current system which is largely based on paying for certain practices to be implemented in conservation programs, plus attaching accountability standards to farm subsidy payments.[45] In other words, the more improvements a producer makes to his or her field and the greater public benefits, the larger the payment. In addition, instead of a “stick” approach with conservation compliance standards, a “carrot” approach could be more widely used to incentivize greater return on taxpayers’ investment in agriculture. These reforms fit beneath an overarching goal of creating a more cost-effective, transparent, accountable, and responsive farm safety net, one that reduces – instead of increases – our nation’s $20 trillion and growing national debt.

For more information, visit www.taxpayer.net, or contact Joshua Sewell at josh at taxpayer.net.