With his creation of a new program to spend $100 million to pay for new gas station pumps that can handle high-blend ethanol fuels, Secretary of Agriculture Tom Vilsack has blinders for blender pumps. The move puts Vilsack squarely at odds with Congress, which previously forbid the Department of Agriculture (USDA) from spending money on blender pumps. For his tunnel-vision on ethanol blender pumps, Sec. Vilsack rightfully receives a Golden Fleece.

View/download this fact sheet in PDF

Taxpayers already support the mature corn ethanol industry through a variety of subsidies and a federal mandate requiring the use of biofuels through the Renewable Fuels Standards (RFS). While biofuels have been touted as a tonic to achieve U.S. energy independence, reduce greenhouse gas emissions, and spur rural economic development, they have not delivered on these promises. Instead they have caused costly unintended consequences in the market and imposed future liabilities for taxpayers. 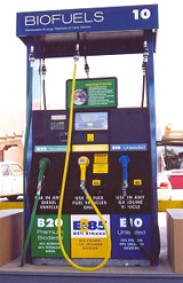 In the 2008 Farm Bill, Congress created the Rural Energy for America Program (REAP) in order to promote the development of next generation biofuels and non-food crop energy sources.[1] The program was designed to provide “loan financing and grant funding to agricultural producers and rural small businesses to purchase or install renewable energy systems or make energy efficiency improvements” to power their farms and businesses. Specifically, it was intended to promote the use of systems generating electricity from a “wind, solar, renewable biomass, ocean […], geothermal, or hydroelectric source.” Note that there is no mention of blender pumps. That’s because REAP[2] was never intended to build the infrastructure for corn ethanol at gas stations.[3]

In April 2011, USDA altered REAP’s regulations,[4] changing its definition of renewable energy systems projects eligible for financial assistance to include blender pumps.[5] Members of Congress immediately raised concerns about the change. Former Senate Agriculture Chairman Saxby Chambliss (R-GA) criticized USDA officials for using REAP for blender pumps, noting that the idea had been considered and was rejected during negotiations between the House and Senate when the 2008 Farm Bill was passed. Sen. Chambliss argued that REAP was not designed for this purpose, was already oversubscribed, and now USDA had added a new competitor in an already over-strapped program.[6]  Then-Rep. Jeff Flake (R-AZ) offered an amendment to a fiscal year 2011 defense and continuing resolution appropriations bill prohibiting funds from any government program from going to blender pumps.[7] It passed on a broad bipartisan basis 261-158.[8] Rep. Flake offered an identical amendment to the FY2012 Agriculture Appropriations bill,[9] which passed 283-128.[10] Both bills passed on floor votes with the amendments attached, conferring upon them the intent of the House of Representatives. Sen. John McCain (R-AZ) offered similar amendments in the Senate.[11]

Blender pumps – Most gasoline purchased in the U.S. is E10, a 90/10 blend of gasoline and ethanol. Ethanol boosters want to push consumers to purchase gas with higher concentrations of ethanol, like E15 or E85 – blends with 15 and 85 percent ethanol that can be used in flex-fuel vehicles. But because normal gas pumps aren’t designed to handle corrosive high-ethanol gas, or offer multiple blend levels, selling the blends requires its own infrastructure. Blender pumps would enable a user to select a blend (percentage of ethanol) by combining gasoline and ethanol from separate tanks to order.

Nevertheless, USDA refused to change the blender pumps language in the proposed rule governing REAP it promulgated in 2013.[12] As a result, from 2011-2013, USDA spent more than $3.2 million in awards for 66 blender pump projects installing more than 260 pumps for gasoline stations across the country. [13], [14], [15]

(B) LIMITATION.—A [renewable energy system] may not include a mechanism for dispensing energy at retail.

The meaning of the provision was unambiguous: blender pumps cannot be considered a renewable energy system project. In case there was any doubt, language in the conference report accompanying and explaining the law affirmed that by extending the definition of renewable energy system to include the pumps, USDA had overstepped the bounds of Congressional intent. The members of the conference committee, as the “managers” incorporating both the House and Senate versions of the Farm Bill, wrote in reference to REAP:

The Managers clarify that the intent of the program has been to promote energy efficiency and the production of renewable energy, rather than energy delivery. Therefore, renewable fuel blender pumps or other mechanisms to dispense fuel are not a use of the program consistent with this purpose. [17] [emphasis added]

The Farm Bill, with the Sec. 9001 provision passed the House by a vote of 251-166[18] and the Senate by 68-32.[19] When President Obama signed it three days later, the matter should have been settled, and taxpayers should have been freed from funding another wasteful giveaway to the ethanol industry.

An End-Run around REAP Rules

Within weeks of the 2014 Farm Bill’s passage, Sec. Vilsack traveled the country announcing his continued commitment to helping the ethanol industry. Speaking at the annual conference of Growth Energy, a trade organization representing ethanol producers, the Secretary declared, “I am a firm believer in this industry. I think it is essential and I think it is absolutely mandatory that this industry continue to survive, to mature and to expand.” He invited requests from ethanol companies for more subsidies, saying, “This is an invitation to you to come to me, and I will help you and USDA will help you, make no mistake about that.”[20] Sec. Vilsack even hinted at how he would try to get around the recent Farm Bill provision.[21] The industry applauded. 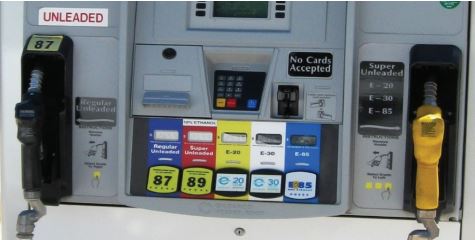 In March 2014, Sec. Vilsack went before the National Farmers Union, another pro-ethanol group, and according to media reports, “pledged to use other USDA rural development programs such as the business and industry loan program to install [blender pumps].” Sec. Vilsack then described how he planned to change the rules of such programs to allow blender pump installation projects to get funding.[22]

In May 2015, the USDA announced it was making $100 million in grants available for ethanol blender pumps[23] through the USDA’s Commodity Credit Corporation,[24] the same source of financing for the REAP grants. The new “Biofuels Infrastructure Project,” which just finished accepting applications for grants,[25] will match USDA funding with state funding, but otherwise resembles REAP. The program has never received legislative authorization, and simply continues an activity that was expressly prohibited by Congress by slapping a different moniker on it. The unilateral decision by USDA to offer millions in support of a mature industry that already receives federal subsidies and enjoys a federal mandate for use of its product raises serious concerns, and represents an egregious waste of taxpayer dollars. 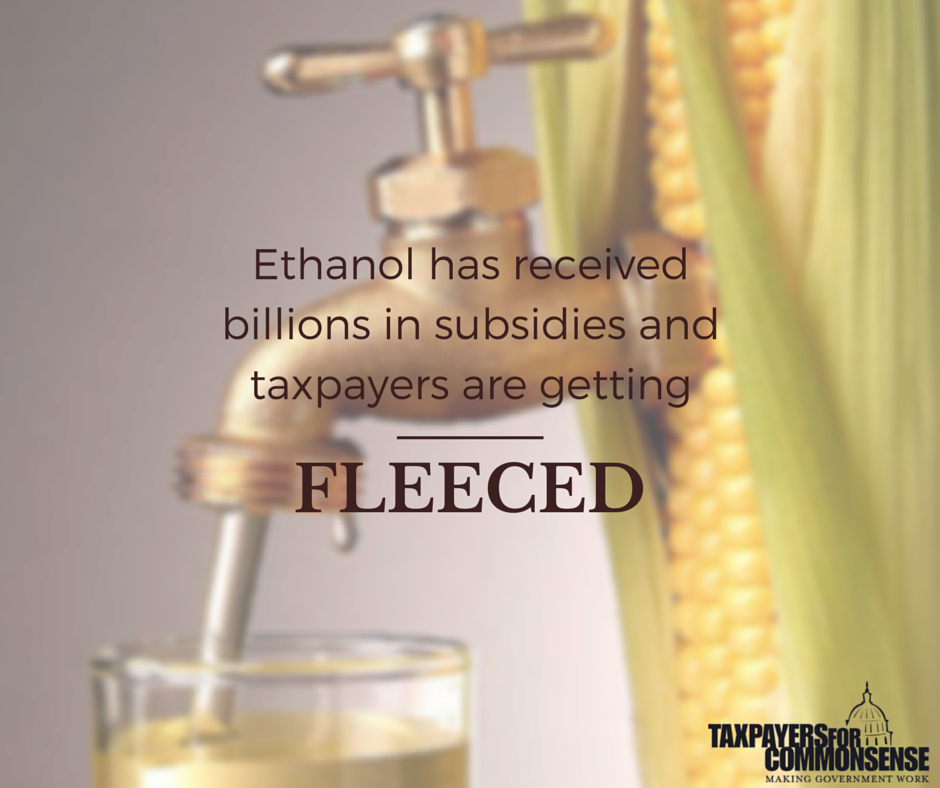 The USDA’s recent funding for blender pumps is just the latest means of promoting the technology and subsidizing the corn ethanol industry that has received federal government support for more than 30 years.[26] Through such provisions as the Alternative Fuel Vehicle Refueling Property Credit, Volumetric Biodiesel Excise Tax Credit/Renewable Biodiesel Tax Credit, and the eligibility rules for Master Limited Partnerships, ethanol is subsidized at great cost through the tax code. It’s also been supported by the Department of Energy’s Clean Cities Program and the Department of Transportation’s Congestion Mitigation and Air Quality Improvement Program, which received $6.8 billion for 2013-2015.[27] In addition to such programs and incentives, the federal government notably guarantees ethanol a market through the Renewable Fuel Standard (RFS), which mandates that oil and gas companies blend increasing amounts of biofuels (of which, more than 80 percent is corn-based ethanol) with gasoline each year through 2022.[28]

As if supporting corn ethanol at every step of the production process wasn’t enough, taxpayers have also been forced to subsidize ethanol blender pumps, a key giveaway to the industry.

The tremendous support for blender pumps through these programs was apparently not enough. In 2011, the USDA co-opted the Rural Energy for America Program (REAP) to further subsidize the technology.

USDA’s utilizing Commodity Credit Corporation funds to support the installation of ethanol blender pumps at gas stations runs contrary to Congress’s intent and further uses taxpayer dollars to cover costs that should be shouldered by the mature corn ethanol industry.

About the Golden Fleece

The Golden Fleece award was created in 1975 by the late Senator William Proxmire. It is intended to highlight instances of wasteful spending. After retirement, Sen. Proxmire served as Honorary Chairman of Taxpayers for Common Sense’s Advisory Board and passed the mantle of the Golden Fleece to the organization in 2000.