1. What are “shallow loss” agriculture programs?

“Shallow loss” agricultural programs are a luxury that would be the envy of any other industry. They are market- and trade-distorting entitlement programs created to deliver taxpayer subsidies to agricultural businesses. The programs are designed to supplement federal crop insurance, a highly subsidized program that already covers crop revenue losses of as little as 15 percent. In shallow loss programs, farm businesses receive payments from the Treasury if their annual revenue dips, which can be as little as 10 percent in one program, well below the average revenue received in the last five years (hence the term “shallow loss”).

2. When and why were shallow loss entitlement programs created?

The first shallow loss entitlement programs written into law in the 2008 farm bill included the Supplemental Revenue Assistance Payments (SURE) and Average Crop Revenue Election (ACRE) programs. Unlike traditional farm subsidy payments, they were designed to cover so-called systemic risks, such as several years of low prices or losses from widespread drought or flooding. But even though ACRE and SURE offered lucrative subsidies, their complexity caused both farmers and policymakers to view them as failures and they were thus eliminated in the 2014 farm bill. Nonetheless, they provided the foundation for new, expensive shallow loss proposals included in the 2014 farm bill.

Shallow loss programs are also a means of maintaining some amount of federal subsidy that could have been eliminated with the end of agricultural direct payments. Introduced as a “temporary” measure to wean farmers from federal agriculture subsidies, direct payments were a $5 billion per year handout to farmers and landowners that received so much widespread criticism, they were eliminated in the 2014 farm bill. With the end of direct payments in sight, farm lobbyists crafted new, just-as-costly (potentially more costly) shallow loss entitlement programs. Farm lobbyists promised taxpayers would at least see savings from the elimination of direct payments. However, because most of the projected savings were plowed into new crop insurance and shallow loss subsidies and the programs are tied to sky-high commodity prices from recent years, actual costs may actually exceed the $5 billion-per-year direct payment program.

3. Which government agency is responsible for carrying out shallow loss entitlement programs?

Shallow loss entitlement programs are administered by both the U.S. Department of Agriculture’s Farm Service Agency (FSA) and Risk Management Agency (RMA). FSA, the agency responsible for dispensing government checks for most other farm subsidy programs such as loan deficiency payments and marketing loans, oversees ARC. Meanwhile, RMA administers SCO and STAX, in addition to overseeing the highly subsidized federal crop insurance program. SCO and STAX, in addition to crop insurance policies, are sold by agents of private crop insurance companies, which also receive taxpayer subsidies for their administrative and operating expenses. The fact that two different USDA agencies oversee programs with similar goals may lead to several unintended consequences, including confusion for farmers, duplicative payments, and varied monitoring and oversight.

Shallow loss entitlement programs were first introduced in an omnibus federal farm legislation: the 2008 farm bill. They were later modified and expanded in the 2014 farm bill. Because farm bills are normally renewed once every five to six years, current shallow loss programs – ARC, STAX, and SCO – will likely be revisited as part of the next omnibus farm bill prior to the current farm bill’s expiration in 2018. The administration of shallow loss entitlement programs could also be modified through annual appropriations bills. Even though the programs receive mandatory funding, the annual agricultural appropriations bill actually fund the agencies charged with administering the programs. There is a long history of making changes in mandatory agricultural programs (ChIMPing) through annual appropriations bills.

5. How much do shallow loss entitlement programs cost taxpayers?

After passage of the 2014 farm bill, the Congressional Budget Office (CBO) projected shallow loss entitlement programs – ARC, SCO, and STAX – would cost taxpayers $14.1 billion, $1.7 billion, and $3.3 billion, respectively, over the next decade (FY14-23). However, the nearly estimated $20 billion cost likely underestimates actual costs since shallow loss subsidies lock in recent high commodity prices and farm income levels, and prices have dropped from historic highs. Congress also used budget gimmicks to mask the actual cost of shallow loss programs. For example, the programs cover the 2014 to 2023 growing years, but since payments don’t begin until fiscal year 2016, there appears to be no cost for FY14 and FY15.

For these and many other reasons, even before the programs were enacted, some economists predict that shallow loss subsidies could easily eclipse the $5 billion annual cost of direct payments. Figures 1 and 2 compare per-acre costs of direct payments with new shallow loss programs, with Figure 1 and 2 estimating potential costs in low and high crop price scenarios, respectively. Some economists predict that shallow loss programs could double, triple, or even quadruple the cost of the discredited direct payment program. References for these cost estimates include the Food and Agricultural Policy Research Institute (FAPRI) at Iowa State University and the University of Missouri, Ohio State University, and Purdue University. 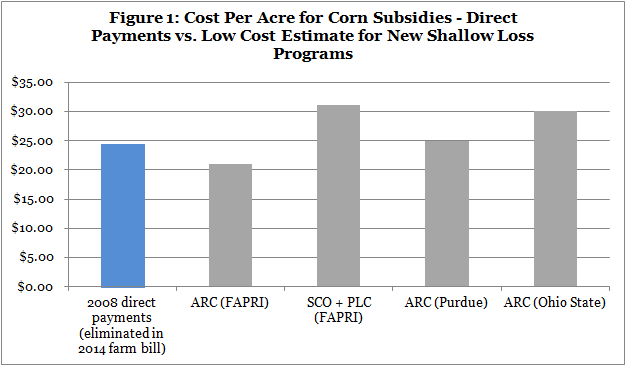 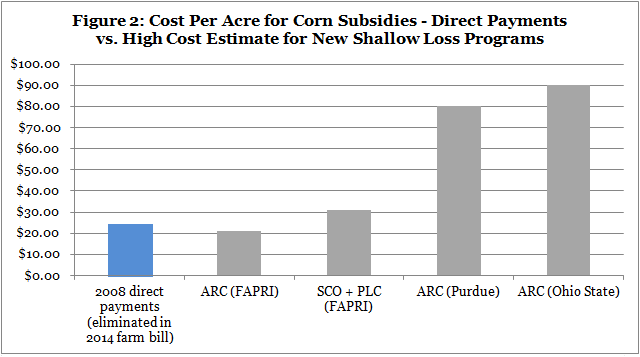 Since agricultural producers respond to the availability of federal subsidies for certain crops, farmers are incentivized to limit annual crop rotations, increase the size of their operations, make risky planting decisions, and plant for the government instead of the market. An examination of historic ACRE and SURE payments found that ACRE payments lined the pockets of producers in Corn Belt states like Illinois, Nebraska, and Iowa, while SURE payments primarily went to areas prone to repeated natural disasters (flooding and drought) including North Dakota and Texas.

RELATED ARTICLE
Stop this Ride I Want to Get Off

Shallow loss programs enacted in the 2014 farm bill expanded taxpayer subsidies for agriculture, leading to unprecedented levels of federal income guarantees for even the most profitable agribusinesses. These programs – income guarantees that are available to no other U.S. industries – effectively ensure that producers bear little financial business risk (see Figure 3 for a graphic representation). More specifically:

Producers may enroll in traditional crop insurance policies in addition to one of the shallow loss programs (ARC, STAX, or SCO), but may not enroll in both ARC and SCO. SCO participants can instead also enroll in a government-set minimum price program called Price Loss Coverage (PLC), which is not available to ARC participants.

8. What are other prominent recent changes to shallow loss entitlement programs?

As stated above, the 2014 farm bill replaced the outdated and discredited direct payment program and shallow loss programs created in the 2008 farm bill – ACRE and SURE – with expanded crop insurance subsidies and three new shallow loss entitlement programs – ARC, SCO, and STAX. By enacting these more costly and complicated programs, Congress shifted even more normal costs of doing business in agriculture and unintended consequences onto taxpayers.

Out of the three new shallow loss entitlement programs, only ARC subsidies are somewhat subject to public disclosure, payment limitations, and means testing. Farm commodity subsidy recipients (including ARC and other farm subsidies but not SCO, STAX, or crop insurance) may receive up to $125,000 annually in federal subsidies, or double this amount for a couple; these subsidy limits were increased from the 2008 farm bill despite our country’s mounting national debt and fiscal challenges. Producers earning more than a generous $900,000 per year in adjusted gross income are not eligible for ARC subsidies, but the Government Accountability Office (GAO) has found that very few producers are subject to this limitation given so many loopholes and the availability of lucrative tax write-offs. In the more secretive federal crop insurance program (which includes SCO and STAX), taxpayers are legislatively forbidden from knowing which agricultural producers, landowners, and crop insurance companies and agents receive billions in annual subsidies. Farm state lawmakers’ desire to hide the beneficiaries of federally subsidized crop insurance runs so high that a provision, adopted unanimously in the House, requiring disclosure of crop insurance subsidies received by any member of Congress, cabinet appointee, or a member of their immediate family was secretly stripped from the 2014 farm bill during conference negotiations. Crop insurance, SCO, and STAX participants also receive unlimited premium subsidies and are not subject to any income means test, meaning millionaires can and do receive taxpayer subsidies to buy income-guaranteeing crop insurance.

In one glimmer of hope, however, Congress required agricultural producers enrolling in these three programs to conserve wetlands and highly erodible land in exchange for taxpayer subsidies. However, since these accountability standards are not consistently enforced, much more needs to be done to ensure taxpayers are not subsidizing risky agricultural production practices.

9. Why should taxpayers care about shallow loss entitlement programs? And what’s a better way of meeting the goal(s) of shallow loss programs?

The entire farm safety net is in dire need of reform, particularly crop insurance and shallow loss entitlement programs. Simply adding more layers to the status quo will not solve underlying problems of excessive risk taking at taxpayer expense and billion dollar costs with little to no public benefit. What was already a flawed and expensive farm subsidy system has only gotten worse with the addition of new expensive and costly shallow loss entitlement programs. With so many layers of subsidies sandwiched together, taxpayers are bound to lose as payments cover duplicative losses, producers make riskier production decisions, and as producers reduce or abandon time-tested unsubsidized risk management practices to benefit from free or nearly-free (to producers, not taxpayers) federal programs.

The federal government’s role should be to cover certain deep, catastrophic losses the private market is incapable of covering, not small dips in income. With numerous risk management options available to cover shallow dips in revenue, producers will not be left out to dry absent shallow loss subsidies. Some private risk management tools include utilizing diversification, alternative lines of credit, vertical integration, better liquidity, hedging, forward contracting, off-farm income, and private crop insurance. (For more information, see our Federal-Free Risk Management in Agriculture fact sheet. If private insurance companies were able to compete on a level playing field without government intervention, additional risk management options would become available. After nearly a century of government support, Washington should be decreasing, not increasing, its role in individual farm business financial decisions and allowing the private market to compete on a level playing field.