The Trump Administration released additional details on how it plans to dole out $16 billion in subsidies to select farm businesses in order to mitigate continued economic damage caused by the president’s imposition of tariffs on goods imported from China. The administration will circumvent Congress and instead use legal authority that originated with Franklin Delano Roosevelt during the Great Depression to borrow $16 billion through the federal entity known as the Commodity Credit Corporation. This $16 billion, $14.5 billion of which will be checks sent directly to select farm business owners, marks the second consecutive year for these bureaucratic bailouts. This despite Agriculture Secretary Perdue and others within the administration stating trade assistance would only be for one year and is for “short-term cash flow issues.” The trade war, and the government’s use of tax dollars to paper over the negative outcomes, is anything but short term.

The majority of the $16 billion in deficit-financed spending will be in the form of “direct payments” sent to farming and ranching businesses that produced particular crops or livestock. These crops include all so-called “covered commodities,” crops that are currently eligible for other Farm Bill subsidy programs (Agriculture Risk Coverage and Price Loss Coverage), as well as milk, hogs, and various tree nuts and fruits. Payments will be made in three batches (mid to late August, November, early January). Individual payment limits and income tests apply. 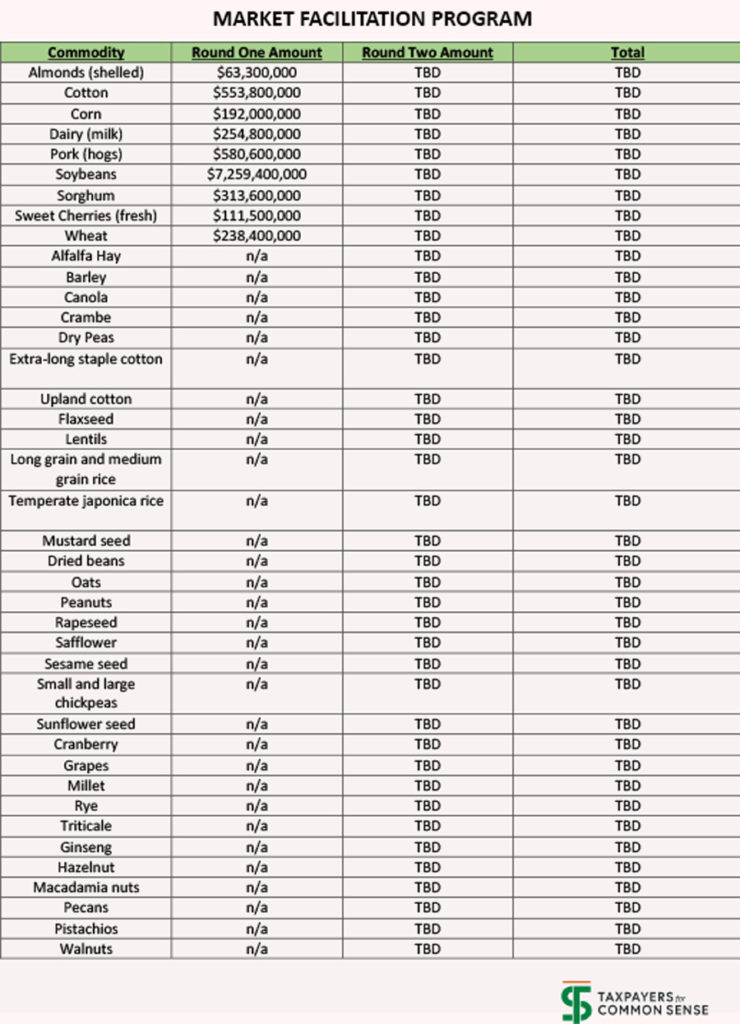 Food Purchase and Distribution Program
Government purchasing commodities in order to remove them from the market = $1.4 billion

The USDA will spend $1.4 billion purchasing “surplus” commodities and distributing them to food banks, schools, and other outlets serving low-income individuals. The intention is to increase prices consumers pay for these commodities by decreasing the availability of these commodities. 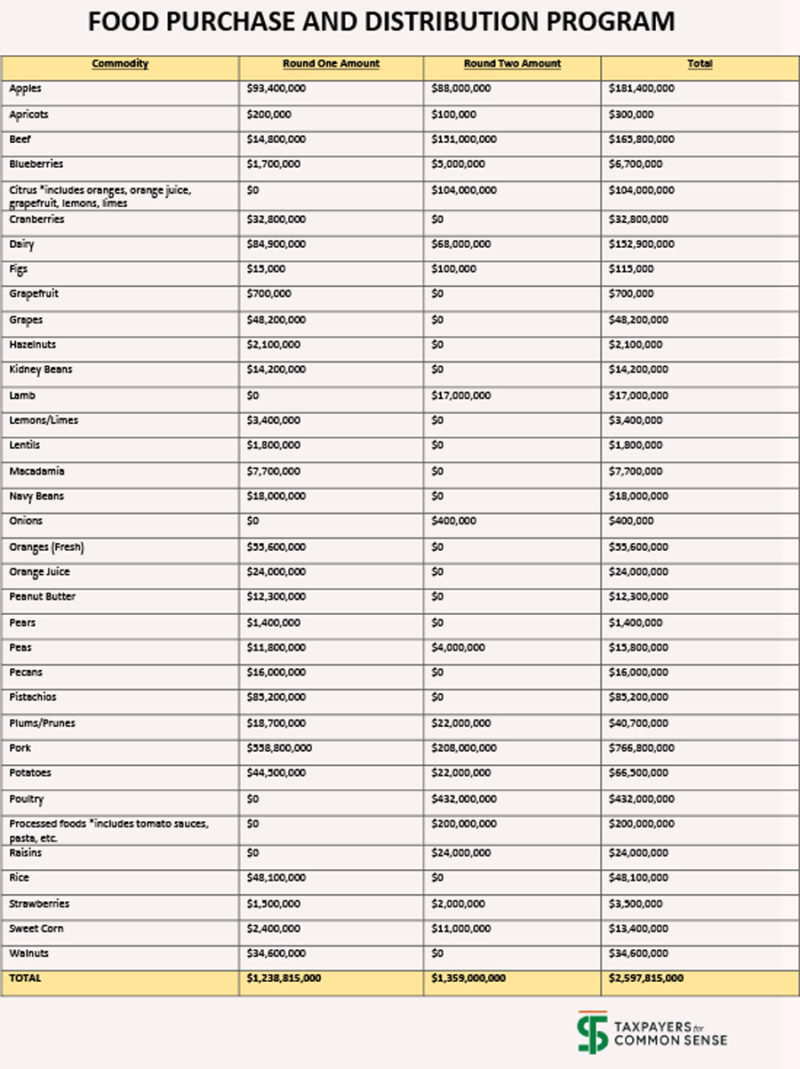 The USDA will give $100 million to 48 organizations and trade groups to develop new markets lost by the trade war. 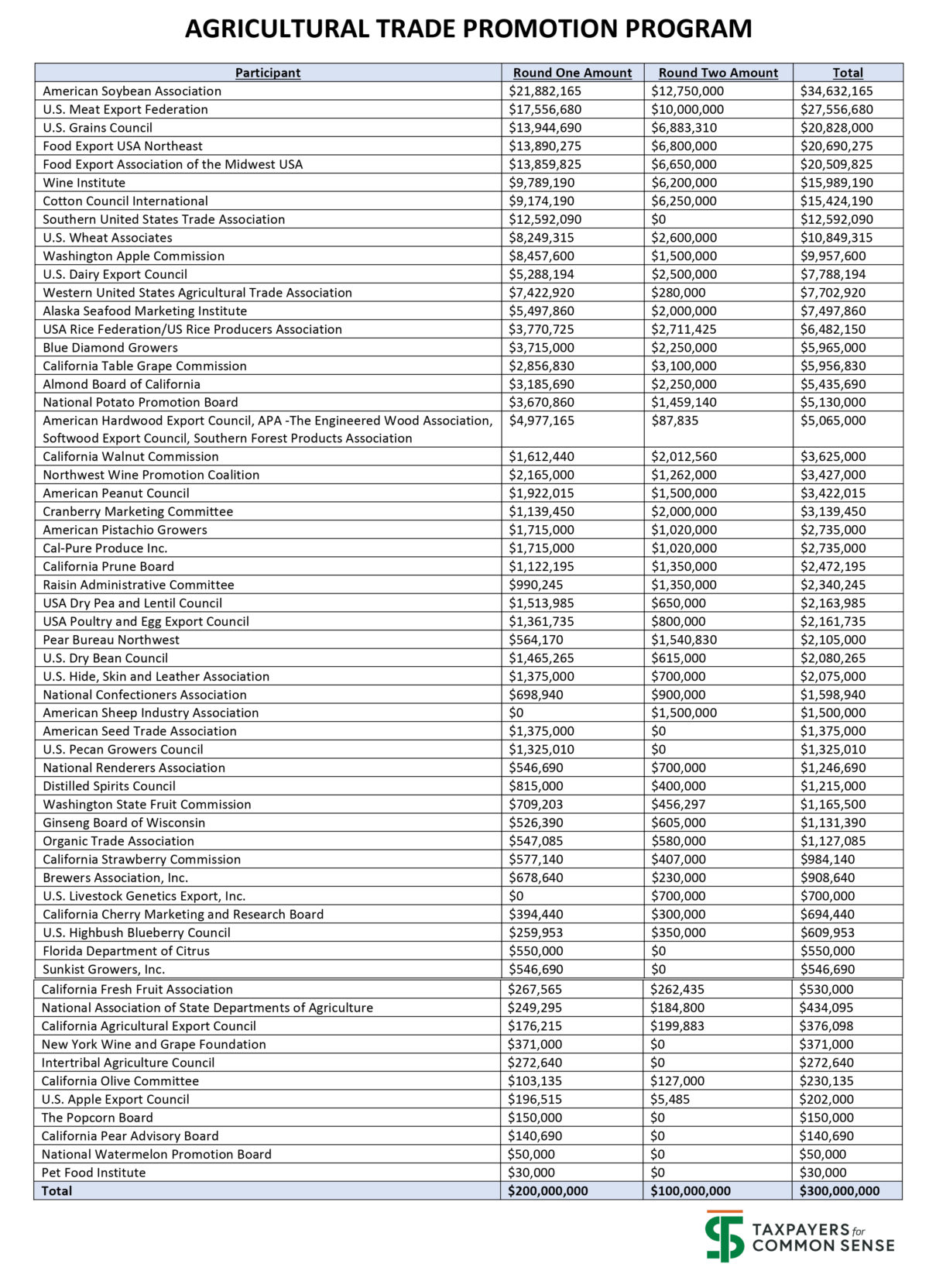 The agriculture sector is at the mercy of Washington

Overall, the $28 billion in hush money is only a bandage that won’t fully replace lost sales. Agricultural exports, historically a perennial bright spot even in the darkest of times, fell 4.4 percent from last year. An already challenging price and income environment was then made more difficult by the wettest year on record, which led to $5 billion in deficit financed subsidies going to ag producers in two supplemental disaster bills, including for the cost of soybeans stored on farm; soybeans that would have been sold if not for the trade war.

For agricultural businesses it appears the most detrimental cost of the Trump Administration’s trade war is the dusting off of Depression-era law to increase Washington’s role in picking financial winners and losers within agriculture. Instead of dismantling burdensome regulatory barriers and arbitrary mandates that prevent farmers and ranchers from operating businesses according to their own abilities, estimates and values, the administration has shown a willingness to replace trade with federal aid. The Market Facilitation Program is here to stay. And it will harm both taxpayers and agriculture.