The Plane That’s Eating the Pentagon

The Plane That’s Eating the Pentagon

You really want that sports car, or a Mercedes, or a vacation, or a big new house, or some other fancy but unreachable item, but in the end you know that if you buy that you won’t be able to afford anything else. It would mean a ramen noodle diet and a threadbare closet from now to eternity for you and your family. So maybe you put up a picture and daydream a little and hope to win the lottery. But what you don’t do – if you’re responsible – is mortgage everything for that one thing.

That’s what you do if you’re not the Air Force, or the rest of the Pentagon for that matter.

A quick survey of the numbers in the Pentagon’s Fiscal year (FY) 2016 budget request is further proof of the unaffordability of the F-35 joint aircraft program – the platinum plated spork of an aircraft intended to replace the F-16, F-15, F/A-18, and the A-10 to name a few. We’ve written a lot about the F-35 and its overall cost. You can read our comprehensive report on the F-35. And we also have a compilation of all our writings on this program. We leave it to others to write about the capability of the aircraft. But we think it’s hard for anyone to argue, with a straight face, that the Pentagon can afford to spend $1.5 trillion on a single aircraft program, as the Congressional Budget Office predicts.

It’s hard for most of us to even conceptualize what $1.5 trillion really means. A trillion is a thousand billions or a million millions. But let’s put just this year’s procurement request for the F-35, across all three services, into perspective.

The Pentagon is asking to purchase 57 F-35s in FY16 – that’s 19 more than the 38 they received in the final FY15 bill. The overall cost of those 57 airframes is slightly more than $11 billion (that’s both procurement and research and development.)

If you just count procurement of airframes and spare parts, you’re looking at $9.2 billion. The total Pentagon request for procurement – in the base budget – is $107.7 billion. So that means fully 8.5 percent of all Pentagon procurement in this budget request that includes all major systems procurement from A to Z – Apache helicopters to Zumwalt destoyers – is devoted to a single aircraft program. That’s a staggering amount.

But there are other ways to slice the budgetary salami. Deep in the Pentagon’s budget submission is a table of “Major Acquisition Programs.” This table gives the dollar amount being spent, in both procurement and research & development, on the Pentagon’s major programs. The aircraft section lists twelve different aircraft programs where, presumably, the Pentagon is pursuing investments in future capabilities.

And if you just look at overall aircraft procurement and R&D costs, 35 percent – more than a third – is going to just the F-35. 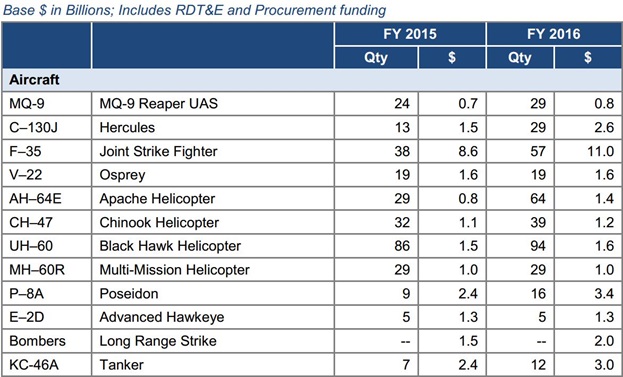 Okay, so a table with a bunch of numbers doesn’t really tell the story, so we put the Pentagon’s own data into a pie chart and added some color: 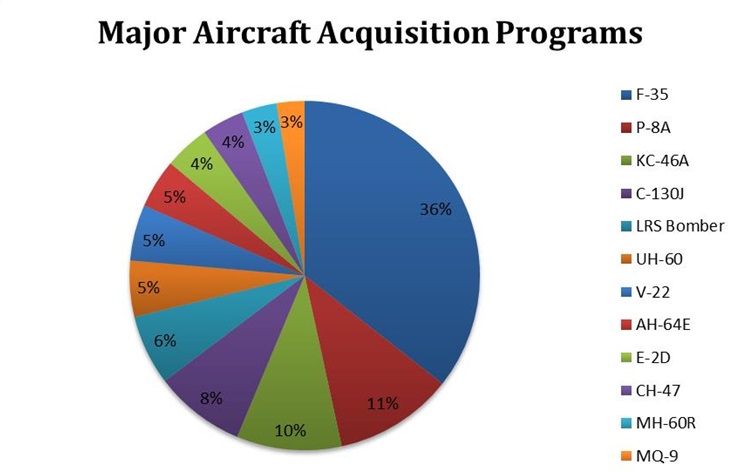 The next way to slice the budgetary salami, illustrates how the Departments of the Navy and the Air Force are allocating their separate aircraft-buying accounts.

This chart represents the Department of the Navy “combat aircraft” account for FY16. (Note that the Navy also buys planes for the Marine Corps.) The P-8 is the largest piece of the pie, with the F-35 coming in second. Overall, the chart shows some balance and a sense of the need for trade-offs to purchase all the airframes necessary for the future of Naval Aviation. 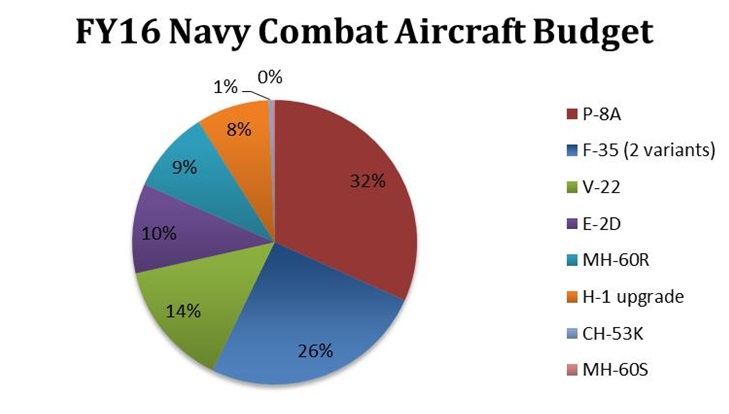 And this chart shows the “balance” in the Department of the Air Force’s “combat aircraft” account for FY16. 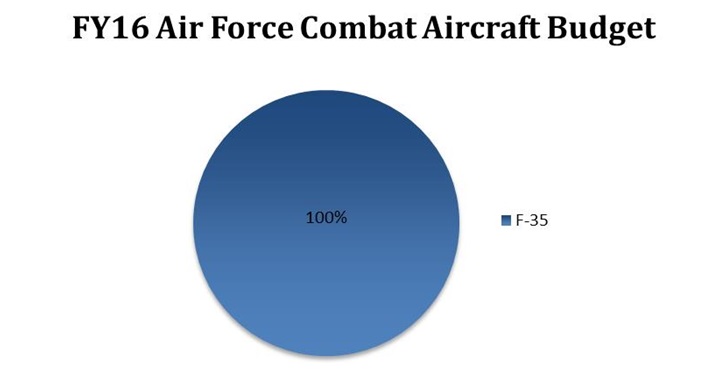 No matter how you slice it, this much is clear – the Pentagon, and in particular the Air Force, is mortgaging the future of not just other aircraft programs, but all Pentagon procurement to purchase one, unaffordable aircraft. We sure hope it works, because that is one pricey, lonely, egg in that basket.