COVID-19, In The NewsMajor cruise companies likely left out of bailout thanks to language in stimulus law

This article by Joce Sterman, Alex Brauer first appeared in WJLA on March 30, 2020

Americans are anxiously waiting on stimulus checks to arrive in the next couple of weeks, courtesy of a massive federal package that will give a boost to everyday citizens, small businesses and hospitals. But some major cruise companies will seemingly be excluded from the bailout, with flags flown on their ships likely disqualifying them for funding.

For days in February, American passengers sat trapped on a cruise ship in Japan, pleading with the U.S. government to step in and help.

But fast forward six weeks and it’s no longer the passengers who need help in this rapidly growing coronavirus pandemic, it’s the cruise industry itself.

President Trump talked about the impact on the industry during a briefing on March 17th, saying, “It’s an industry that was setting all sorts of records two months ago. Then all of a sudden there’s nobody on the ships. Okay? We have to help these.”

The president has called the cruise industry a “prime candidate” for federal bailout funding, with cruises suspended for weeks in the aftermath of the coronavirus pandemic. But it appears language in the massive stimulus bill law signed just a few days ago likely shuts out major industry players. Why? Steve Ellis, President of the nonpartisan Taxpayers for Common Sense explained, “Most people, including lawmakers, don’t realize when they see these cruise ships departing from U.S. ports and coming into U.S. ports that they’re not actually U.S. companies.”

Spotlight on America talked remotely with Ellis about the three biggest cruise lines: Carnival, Royal Caribbean and Norwegian, which make up about 70% of the industry. We’ve learned that although their websites list their headquarters as Miami, these companies are legally incorporated overseas. Ellis said they run ships under the flags of other countries, following their corporate tax laws, not ours.

“They’re taking advantage, locating in another country to fly a flag of convenience to not pay U.S. taxes,” said Steve Ellis with Taxpayers for Common Sense. “If they want to be incorporated in Bermuda, Liberia and Panama, why don’t those countries do the bailout for them?”

That’s apparently how congressional lawmakers felt during the bailout debate. Sen. Sheldon Whitehouse, D-R.I., tweeted, “The giant cruise companies incorporate overseas to dodge U.S. taxes, why should we bail them out?” And U.S. Rep. Jackie Speier. D-Calif., tweeted, “If they want bailout money from the U.S. government, they have to play by our rules”. Speier and a group of four other lawmakers sent a letter to House leaders, objecting to cruise industry bailout funding.

Leading a letter to hold the cruise industry accountable. They pay little in taxes (like 1%), pollute the environment, & stiff passengers who have to cancel cruises w/the bill. If they want bailout $$$ from the U.S. government, they have to play by our rules & uphold our values! 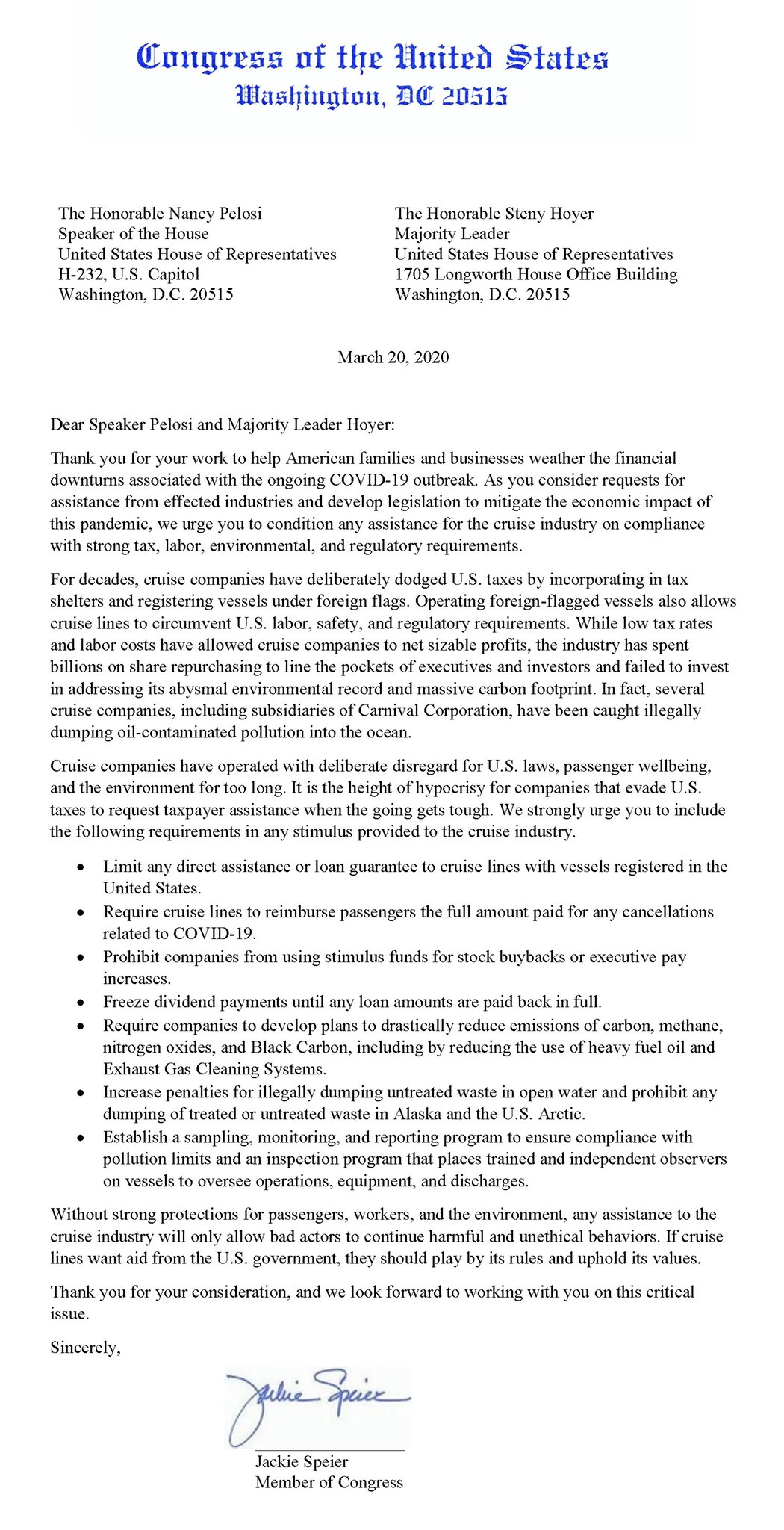 The rules of the federal stimulus package explicitly say companies must be created or organized in the United States and have significant operations and employees based in the U.S. to qualify. So in essence, Ellis explained, the cruise operators can’t have it both ways. “You can’t not pay into the tax rolls and then expect a bailout on the outside, particularly when you’re a profitable company.”

The Cruise Lines International Association, an industry group, tells Spotlight on America it will continue to work with policymakers on behalf of the half a million American workers supported by cruising. CLIA further stated that more than 30,000 of its travel agent members will qualify for stimulus funding.

A spokesman for the group said in a statement, “The cruise industry supports over 421,000 American jobs, the majority of which are at small and medium size companies, especially travel agencies but also suppliers and tour operators of all kinds. Our immediate focus as it relates to this bill was getting these businesses the help they needed in the short- to medium-term. As we look to the future, we know that their long-term recovery is intricately linked to the ability of cruise ships to resume normal operations as soon as it is safe to do so. That is where we will be focusing our efforts in the coming weeks and months.”

Still, President Trump is still floating the idea that the big three could bring their operations stateside, but no one knows. In a March 26th briefing, he said, “I do like the concept of perhaps coming in and registering here, coming into the United States. It’s very tough to make a loan to a company when they’re based in a different country, but with that being said, they have thousands and thousands of people that work there, and maybe almost as importantly, that work onshore filling these ships with goods and products. And the cruise line business is very important.”

Ellis believes bringing foreign-flagged cruise companies back under the U.S. umbrella is a fair move. “These companies have not been good actors dealing with taxpayers, so they should be brought to account and made sure they’re paying their fair share moving forward,” he said.