Understanding the National Debt and the Debt Ceiling

reportUnderstanding the National Debt and the Debt CeilingAn explainer on the national debt, the debt ceiling, and how the two are connected.

On September 8, 2017, Congress passed and President Trump signed into law a temporary suspension of the national debt limit (also known as the “debt ceiling”) through December 8, 2017.

What is the debt ceiling and why is it important?

The Deficit vs. the National Debt

It’s simple math. If the federal government takes in less money than it spends, it must make up the difference, which it does by selling assets or borrowing money.[1]

The government borrows by selling Treasury Bonds (and Notes, which are short-term bonds) to domestic and foreign investors. Each bond pays interest at a specified rate, and the face value of the bond is repaid by the government to the bond-purchaser when the bond matures. If the government does not have enough net revenue to repay a bond when it matures, it sells new bonds to repay the old ones.

The national debt is the accumulated value of the government’s net borrowing. That’s how much the government owes to its bondholders at any point in time.

In general, deficits from government operations increase the national debt and surpluses reduce it, although the existence of Social Security and other trust funds complicates the relationship between annual deficits (or surpluses) and debt. In most years, the government runs a deficit. In the 88 fiscal years since the stock market crash of 1929, the government has run a consolidated surplus only 13 times. The other 75 years it has generated deficits. In FY2017, the deficit was approximately $603 billion. At the end of FY2017, the national debt was approximately $20.2 trillion.

Trust Funds and the National Debt

Some government bonds are not held by public investors, but by other U.S. government entities, primarily trust funds. There are over 100 trust funds, but the five biggest funds support retirement programs (Social Security, Medicare, and funds for government employees). These funds account for over 85 percent of Treasury bonds held by all government entities.

The dynamics of federal debt held by retirement trust funds is different from that of the debt held by public investors. When Social Security and Medicare take in more money than needed to pay current beneficiaries (which has happened for decades), that surplus must by law be held in Treasury bonds. Treasury bonds are assets of the trust funds, but they are liabilities of the federal government. In effect, when trust funds run surpluses, American taxpayers and employees collectively lend their retirement money to the federal government. Some of those loans will have to be paid back as the population of retirees increases in the next decade. When that happens, the government will have to raise more revenue, reduce expenditures, or borrow more money from the public (or some combination of the three) to fully pay benefits to Social Security and Medicare beneficiaries, and to civilian and military retirees. Today, intra-government debt accounts for 27 percent of total government debt.

The past combination of annual operating deficits and (more recently) annual trust fund surpluses, means that the national debt has increased in almost every year for over a century. In the 118 fiscal years from 1900 to 2017, the national debt has grown in 101 years, and decreased in only 17 years. (Data for 1940 to the present are presented in Figure 1.) The last time the national debt did not grow from one year to the next was 1957. Even during the four years from 1998 to 2001, when for the first time since the 1960s the government ran annual consolidated surpluses, the total debt expanded, because of growth in the trust funds. During those four years, the combined surplus was $559 Billion. During that same period, the national debt increased by $405 Billion. 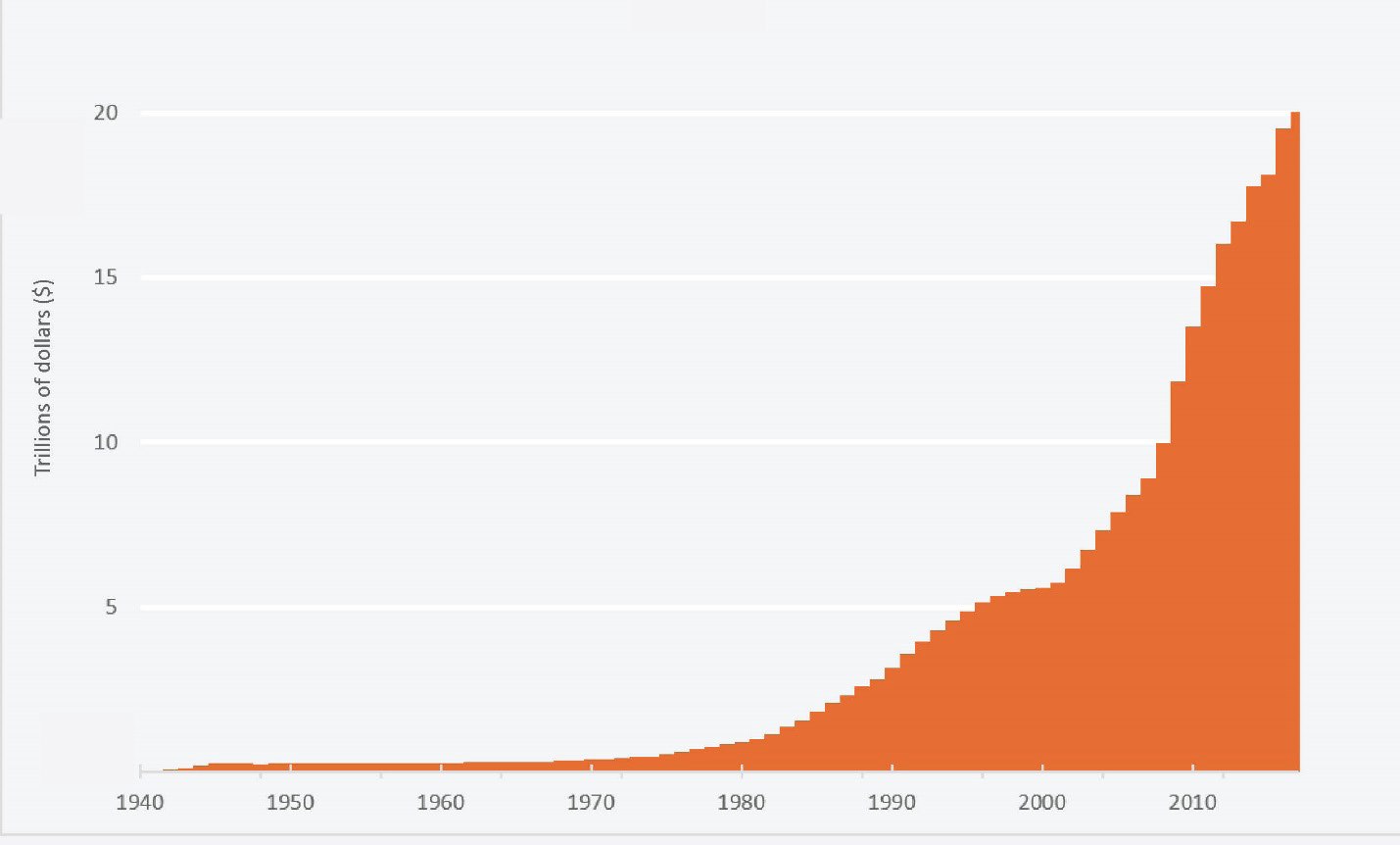 Prior to 1917, the US did not have a debt ceiling. Congress either individually authorized specific borrowing, or granted Treasury the authority to issue debt instruments under specified conditions. Individual bond approvals became unworkable with the large increase in government spending that followed U.S. entry into World War I. The Second Liberty Bond Act of 1917 began a process of granting greater flexibility to the Treasury to issue debts subject to various limits, in addition to the bonds specifically authorized by Congress. Multiple changes were made to this system throughout the 1920s and 1930s until the Public Debt Act of 1939 established an overall debt ceiling of $45 billion. That initial debt ceiling has been amended over 90 times since 1939. Most of the amendments have increased the ceiling, some have decreased it, some have been “temporary,” others have been “permanent.” The debt ceiling has been briefly suspended a handful of times, including at the end of fiscal years 2014, 2016, and 2017 (Figure 2). In practice, the debt ceiling has been increased each time total indebtedness has reached the debt ceiling. 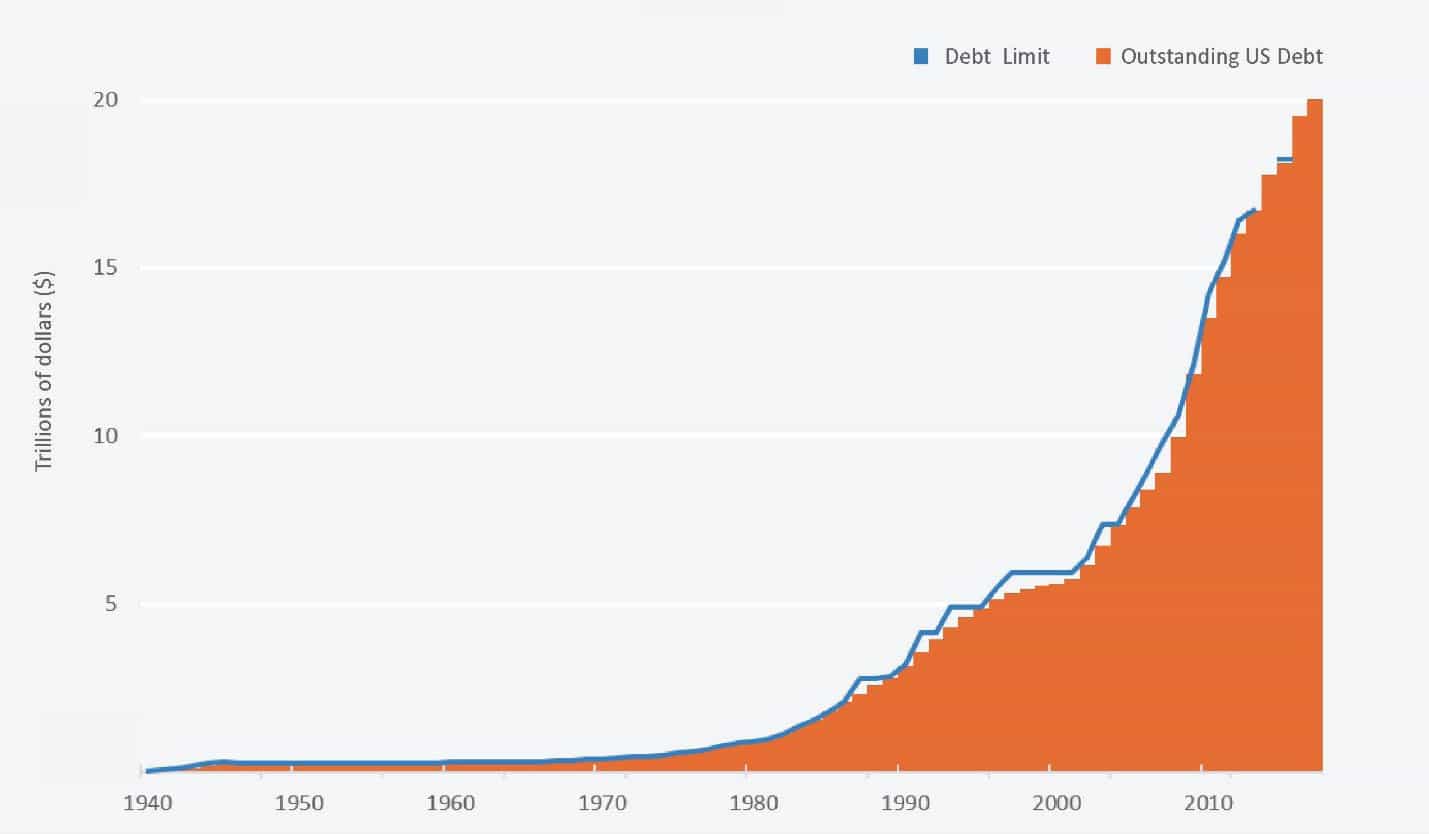 What Happens If the Debt Ceiling Is Not Raised?

When total government debt reaches the debt ceiling, the government must choose one or more of the following five options:

In the post-World War II era, U.S. government bonds have been viewed as a risk-free investment. Default would change that. A U.S. government default would have massive consequences for domestic and international financial markets. It would inflict lasting damage on the U.S. economy. Even the possibility of a default that is avoided at the last moment could have significant (albeit smaller) impacts on financial markets and the economy. After a default (or a high risk of default), interest rates would go up; investment, stock markets, economic growth, and eventually employment would go down. The U.S. dollar has long been the world’s reserve currency, and that status brings enormous benefits to the domestic economy. Default would jeopardize the dollar’s role as the reserve currency, further damaging our economy. Almost every politician and economist across a broad spectrum of political and academic backgrounds believes that a U.S. government default must be avoided.

In recent years, some politicians have argued that defaulting on just the intra-government debt owned by the trust funds is less risky, since it would protect outside investors who hold and buy bonds. But this is unlikely to be the case. The vast majority of intra-governmental debt is held in Social Security and other retirement trust funds. Current and future Social Security and Medicare recipients may not legally be bond owners, but they are de facto investors in Treasury bonds. Furthermore, defaulting on intra-governmental debts would send a signal to financial markets that U.S. government bonds would no longer be a risk-free investment. Default on intra-government debt will still be viewed as a default.

With default off the table, there are only three moving parts left: revenue, spending, and borrowing. Preventing movement in any one of these three options puts extra pressure on the other two. The annual budget deficit is roughly equal to 15 percent of total government spending, and roughly 30 to 40 percent of the annual appropriated discretionary budget.[2] Unless hard decisions about changes in revenue, mandatory and discretionary spending are made well ahead of time, it is impossible to reduce the deficit to zero in the final weeks before government indebtedness approaches the debt ceiling. Therefore, raising the debt ceiling almost always becomes “must-pass” legislation. Because it puts a spotlight on government debt, it has always been viewed as a tough vote by lawmakers.[3] More recently, political brinkmanship has accompanied the inevitable change in the ceiling. Political goals of one or more congressional factions may be achieved, but not without risk of damage to the economy. It is worth noting that the Gramm-Rudman-Hollings Balanced Budget and Emergency Debt Control Act of 1985, the budget accord of 1990, and the Budget Control Act of 2011 all included increases in the debt ceiling.

Whether or not it is a good idea to have a congressionally imposed debt ceiling is a fiercely debated and open question. What is clear is that the national debt, and the annual deficit, should be measured, and analyzed, and debated relative to the size of the U.S. economy (as measured by Gross Domestic Product, or GDP), rather than in nominal dollars (Figure 3). 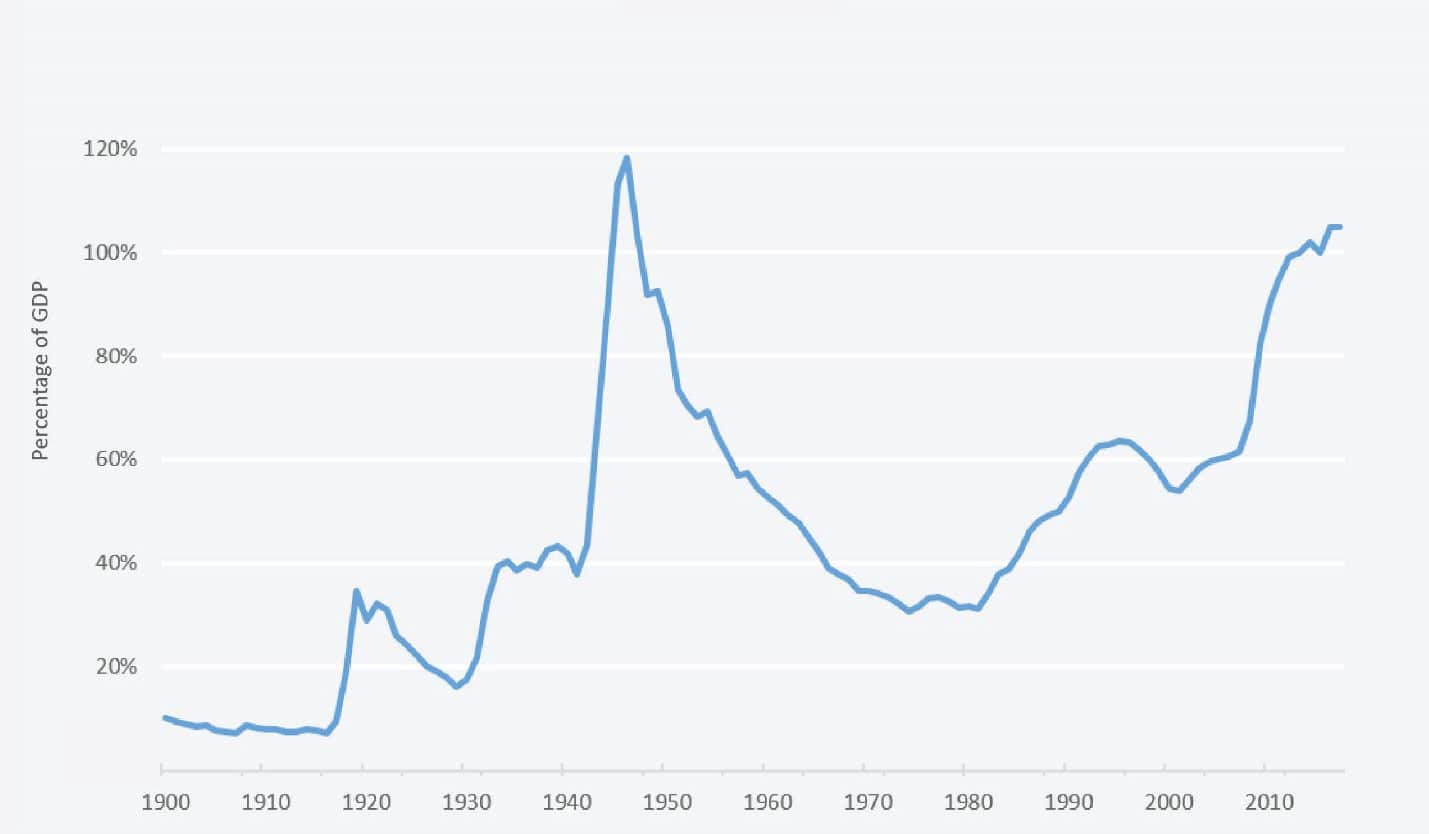 While it may be easier for the public to grasp, measuring the debt in nominal terms gives policymakers and the public misleading information, and thereby leads to poor economic and governance decisions.

In general, any nation’s annual deficits and national debt should expand during recessions and national crises, as revenue decreases and safety net and/or military spending increases. Conversely, annual deficits and the debt should contract during good economic times. This was the pattern in the U.S. prior to 1981. World War I, the Great Depression, and World War II caused debt peaks (Figure 3; there were also prior debt peaks, during the Revolutionary War and the Civil War.) The peak from World War II was much higher than previous peaks; it pushed debt levels above 100 percent of GDP for the first time.

Policymakers have failed to follow the most basic requirement for management of the government’s finances. The debate about annual deficits and the national debt should center on the size of the deficit and the debt relative to GDP. The nominal debt ceiling may be easy to understand, but it does not address our real problem. As constructed, the debt ceiling does not give America a framework to solve its very serious debt problem, and such a framework is sorely needed.

[1] The government could also print new money to pay its bills. But this option only works in relatively small amounts for relatively short periods. Covering all deficits with newly printed money can trigger hyper-inflation. This is not a realistic option.

[2] Two-thirds of annual federal spending is “mandatory” (such as Social Security and Medicare) and not subject to annual spending decisions. The remaining third is “discretionary” and includes defense, homeland security, and other spending subject to the annual appropriations process.

[3] For instance, between 1980 and 2010 the House of Representatives had the “Gephardt Rule” which enabled them to increase the debt ceiling as part of the budget resolution, avoiding a separate vote.

Coronavirus relief will only work with ‘actual legislation’