In the last few decades, lawmakers have periodically proposed opening up the Arctic National Wildlife Refuge (ANWR) in northeast Alaska to oil and gas production. Specifically, these proposals would facilitate leasing for parcels in the Coastal Plain of ANWR, also known as the 1002 Area,[1] which constitutes 1.57 million acres (see map). On a few occasions, the Congressional Budget Office (CBO) has estimated this would generate significant new revenue for federal coffers. There is good reason to believe, however, that the CBO’s estimates for potential new revenue are grossly overstated. As a result, attempts to offer oil and gas development in ANWR as an offset for other federal spending would likely end up shorting taxpayers. 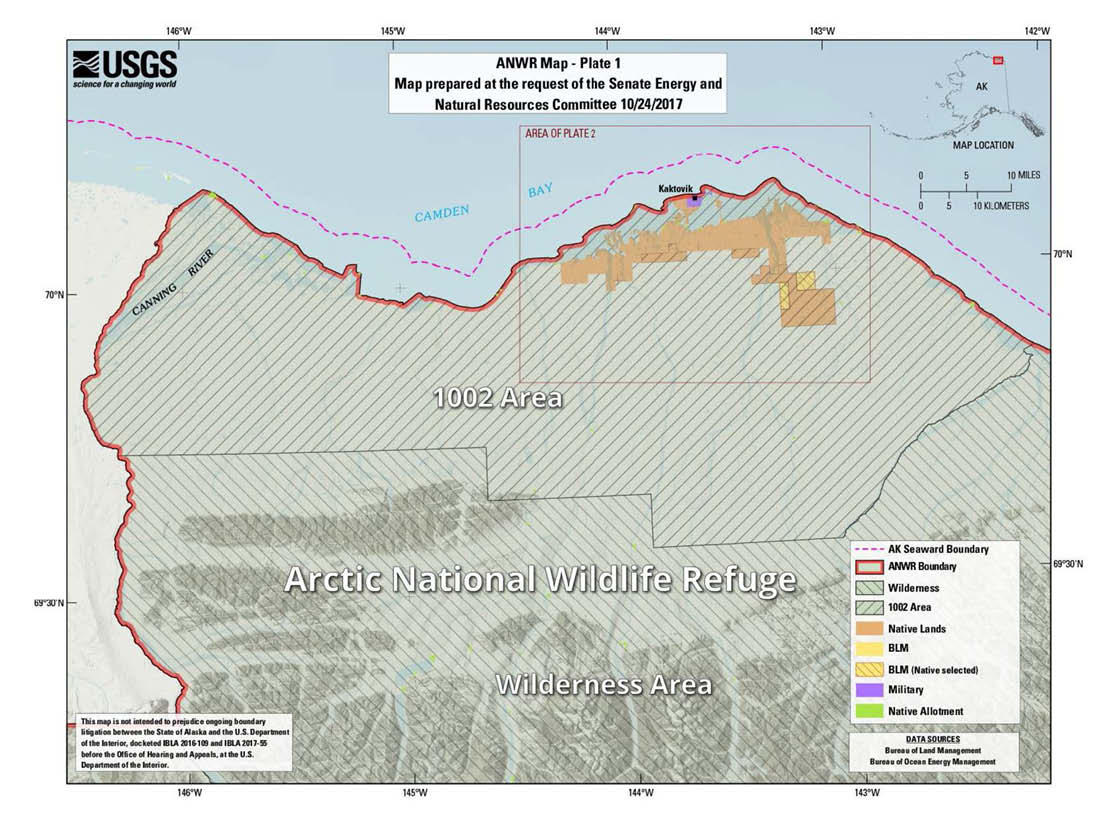 On November 8, Sen. Lisa Murkowski (R-AK), Chairman of the Senate Energy Committee, released a draft of her committee’s recommendation to meet the reconciliation instructions, which would authorize an oil and gas leasing program in the 1002 Area. Like most ANWR drilling proposals, the legislation directs that 50 percent of any revenue generated from the leases be shared with the state of Alaska. [3] If enacted, the Department of the Interior (DOI) would be required to hold two lease sales of 400,000 acres each. The CBO has scored the measure as generating $2.18 billion from bonus bids over ten years, or $1.09 billion for the federal Treasury.

The measure subsequently passed the committee and was added to the Senate’s tax bill to create the FY 2018 budget reconciliation legislative package on November 28.

In 2005, Congress passed a budget resolution for FY 2006 that included similar instructions for the House Committee on Resources and the Senate Committee on Energy and Natural Resources to make proposals to reduce direct spending by $2.4 billion over 10 years.[4] In response, both committees submitted statutory changes that would allow for oil and gas leasing on the Coastal Plain of ANWR.[5] In its reviews of the House and Senate committees’ recommendations, the CBO estimated that administering oil and gas leasing in ANWR would have generated slightly more than $5 billion over ten years, mostly from bonus bids for the new leases.[6]After deducting Alaska’s share, the proposals would have ostensibly netted the federal government $2.58 billion.

In 2012, the CBO scored another measure that would have directed the DOI to institute a leasing program for the Coastal Plain. Again, the agency projected that bonus bids from lease sales would generate $5 billion in gross revenue, half of which would be directed to Alaska. The has CBO also cited this 2012 score in subsequent materials.

Drilling into the Numbers

If Congress were to enact legislation that opened up the 1002 Area to oil and gas leasing, it is unlikely – near to the point of impossibility – that such leasing would generate the amount of revenue to the Treasury that the CBO predicts. For the CBO’s projections to be accurate, leases would have to receive bonus bids that defy historical precedents and the most reasonable assumptions.

According to the Congressional Research Service (CRS), the 1002 Area covers 1.57 million surface acres. Even if every acre of the 1002 Area were leased for oil and gas production – which is not under consideration –the DOI would have to receive bonus bids of more than $3,100 per acre, on average, for the CBO’s 2012 projection of $5 billion in revenue to be borne out.

If all 800,000 acres offered for sale under the 2017 proposal were leased, the DOI would have to receive bonus bids of more than $2,700 per acre, on average, for the CBO’s projection of $2.2 billion in revenue to be realized.

Recent lease sales in the North Slope region suggest both amounts are extremely improbable for two reasons discussed below: (1) even if all or significant amounts of acreage in the 1002 Area were offered for lease, oil and gas companies would bid on only a fraction; and, (2) an average of $3,100 or $2,700 per acre far surpasses anything seen in recent lease auctions.

The Numbers Don’t Add Up: Evidence from Past Oil and Gas Lease Sales on Alaska’s North Slope

The Bureau of Ocean Energy Management (BOEM) held its two most recent federal offshore lease sales off Alaska’s North Slope in 2007 and 2008. Of those, the 2008 Chukchi Sea sale offered parcels further away from ANWR, but it generated significantly higher revenues: $2.66 billion for 2.76 million acres, or roughly $965 per acre. Even when expressed in 2016 dollars – $1,076 – that’s only one-third of what would be needed for ANWR drilling proposals to generate $2.5 billion in bonus bid revenue for federal taxpayers, if every acre of the Coastal Plain is leased. Or less than half of what would be needed to generate $1.1 billion for federal taxpayers if 800,000 acres were leased, as Sen. Murkowski’s bill proposes.

There’s reason to believe, furthermore, that bonus bids from ANWR lease sales would amount to much less. The amount of recoverable oil and gas reserves, and therefore the potential to attract high bonus bids, varies widely from one part of the North Slope to another, but no other recent lease has generated anything close to the 2008 Chukchi Sea sale.

A 2007 sale offered parcels closer to the ANWR Coastal Plain, in the Beaufort Sea. From that sale, BOEM ended up leasing 90 tracts covering 491 thousand acres for bonus bids of $42 million, or roughly $85 per acre. In a 2016 sale, which also offered parcels in the Beaufort Sea – some off the coast of the Coastal Plain – the State of Alaska received only $25.77 per acre for 32 thousand acres.

Production cost calculations differ greatly between offshore and onshore operations. Bids for onshore tracts, therefore, might better approximate potential bids for 1002 Area tracts. But data from recent sales do not indicate onshore bids would be substantially higher. For parcels offered in four sales from 2013 to 2016 in the National Petroleum Reserve-Alaska, the Bureau of Land Management (BLM) received about $24.25 per acre. In a 2016 sale for tracts in the wider North Slope area, the state of Alaska generated only $28.17 per acre.

Nothing from these historical sales suggests the federal government could receive bonus bids of $3,100 or $2,700 per acre – what the CBO has previously assumed for leases in ANWR.

Under the most generous auction scenarios, it’s hard to make the CBO’s math work. In more probable scenarios, under reasonable assumptions, the federal government would generate significantly less revenue from arctic drilling than the CBO predicts. As noted above, there’s no reason to believe that all 1.57 million acres of the 1002 Area would be offered for oil and gas development. Even if they were, only a fraction of available parcels are likely to garner a bid. Of all tracts offered in the sales mentioned above, only 7.3 percent, comprising just 9.2 percent of all available acres, received bids.

In the highly unlikely event that every acre of ANWR’s Coastal Plain was opened up to leasing, oil and gas companies bid on parcels containing 25 percent of those acres, and the bids are made at the 2008 Chukchi sale average adjusted for inflation, only $422 million would be generated.

Only half – $211 million – would flow to federal coffers, and taxpayers would receive less than one-tenth of what the CBO predicted in 2005 and 2012.

As noted above, the most recent legislation directs the DOI to offer 800,000 acres in two oil and gas lease sales in the 1002 Area within seven years of the measure’s enactment. If that were to happen, and we assume 25 percent of the acreage is bid on at an average of $1,076 per acre, we can project that the legislation would generate a mere $107.6 million for federal taxpayers over 10 years.

Once again, that’s less than one-tenth of what the CBO predicts.

If Congress passes legislation authorizing oil and gas leasing in the Coastal Plain of the Arctic National Wildlife Refuge, resulting lease sales will not generate the needed revenue for federal taxpayers. This is another budget gimmick that is only going to drive up the federal debt. If Congress needs to find more revenue from energy development on federal lands or waters, there are a lot of options that would produce $1 billion, and do it more quickly than counting on new and speculative development.

[5] The two proposals differed on how this would be achieved and the recommendations by the House Committee on Resources included additional provisions that, among other things, would have opened up leasing in some federal waters.