Established by an Executive Order in 1999, the Bioenergy Program for Advanced Biofuels (BPAB) is intended to pay advanced biofuels producers to expand their production levels.[1]

Other than corn starch ethanol, nearly every other type of biofuel is eligible for the program, including ethanol, biogas, butanol, or biodiesel derived from cellulose (like perennial grasses or agricultural residues), sugar or starches, waste materials, sugarcane, or woody biomass.[2] In addition, mature corn ethanol facilities that also produce ethanol from sorghum receive subsidies through BPAB. BPAB is administered by the U.S. Department of Agriculture’s (USDA) Rural Development office. As compared to the 2008 farm bill, the 2014 farm bill provided significantly less mandatory funding of $15 million for each Fiscal Year 2014-18 and discretionary (optional) funding of $20 million annually.[3]

BPAB is funded though the energy title of the farm bill. The farm bill, renewed approximately every five years, is a wide ranging piece of legislation that funds everything from nutrition assistance programs and broadband internet to agricultural subsidies for the production of crops such as corn and soybeans. More specifically, the energy title of the farm bill, first introduced in 2002, provides grants, loans, and other subsidies to energy efficiency, biofuels, and bioenergy (heat and power) projects. In total, the 2014 farm bill energy title’s programs are projected to cost taxpayers $879 million from FY14-23.[4]

In particular, BPAB provides taxpayer subsidies to a range of facilities to increase annual production of biofuels. Other farm bill energy title programs provide taxpayer support for research and development grants to investigate new uses for biomass sources such as wood and agricultural residues; the collection, storage, harvest, and transportation of biomass sources to bioenergy or biofuels facilities; anaerobic digesters that create heat and power from animal waste; grants and loans to individuals or companies that install wind, solar, and geothermal systems; and federally backed loan guarantees for so-called next generation biofuels facilities that produce biofuels other than corn ethanol. While intended to support the next generation of biofuels derived from non-food sources and other renewable forms of energy, the farm bill energy title has also spent taxpayer dollars on the mature corn ethanol industry, supporting biomass sources with numerous unintended consequences, and even paying for updates to farmers’ irrigation equipment and grain dryers.

Over $275 million in taxpayer dollars was dispensed from 2009 to May 2016 through the BPAB program via spending authorized in the 2008 and 2014 farm bills.[5] Figure 1 and Table 1 below illustrate which types of feedstocks received the most taxpayer subsidies over this timeframe. Together, soy biodiesel and corn ethanol facilities were awarded over half of all BPAB funding even though the program was intended to spur production of next-generation advanced biofuels from non-food sources. Facilities converting animal fats, canola oil, vegetable oil, used cooking oil, or a combination of these received another 45 percent of funding. Those feedstocks or technologies collecting the few remaining dollars include wood pellets, seed waste, landfill gas, and anaerobic digesters. Notably absent from the list of subsidies are feedstocks such as perennial grasses and agricultural residues that were promised to be funded through advanced biofuel programs such as BPAB since the industry has not taken off as once envisioned and mandated by Congress.[6] 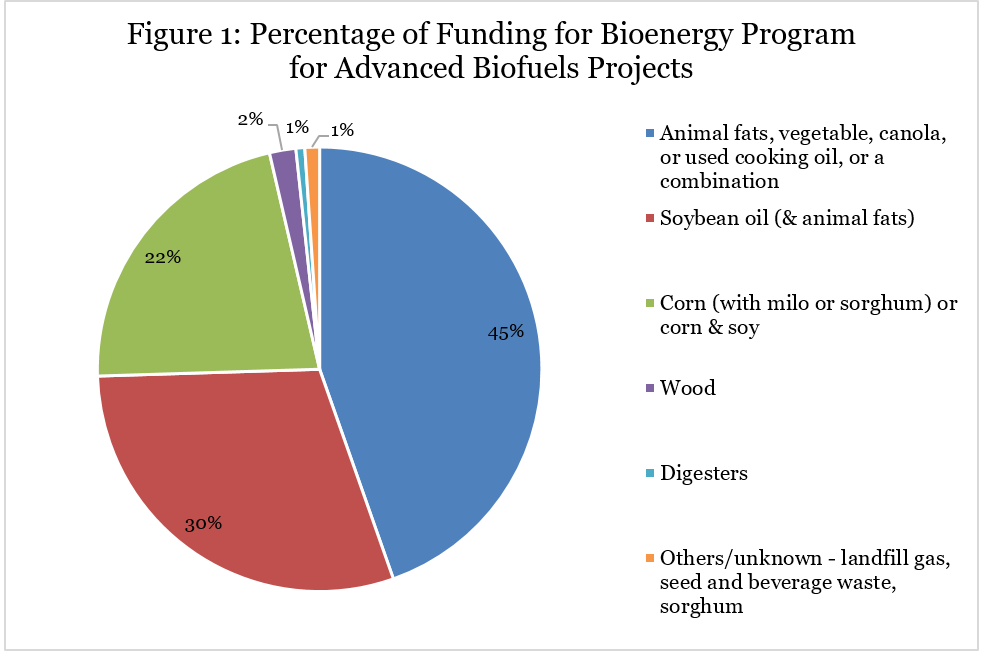 The highest average payments per project by far have been awarded to large agribusinesses operating corn and soy biofuels facilities. This is despite the fact that corn ethanol facilities are not even eligible for funding through this program or defined as an advanced biofuel in any current federal legislation. Regardless, USDA is still providing money to this mature industry. From 2009 to 2016, 25 corn ethanol facilities and two corn oil biodiesel facilities received over $60 million in federal subsidies, an average of $2.2 million per project. See Table 2 for more information. The corn ethanol industry has already received more than its fair share of federal subsidies over the past 40 years, including energy and commodity subsidies in the farm bill, production tax credits, import tariffs, taxpayer-backed loans, and infrastructure support. In addition, corn ethanol production is mandated through the federal Renewable Fuel Standard (RFS). The RFS requires that 15 billion gallons of corn ethanol be blended with U.S. motor gasoline from 2015 to 2022.

Not only is corn ethanol taking federal BPAB subsidies that were intended to be for next-generation, non-food-based biofuels, corn ethanol is also undermining environmental standards attached to the RFS.

RELATED ARTICLE
The Pentagon Budget Is Out of Control

Since BPAB subsidy recipients are not required to reduce GHG emissions by any amount (as compared to the RFS which requires 20% reductions for conventional corn ethanol and higher reductions for advanced and cellulosic biofuels), federal subsidies are being spent on a biofuel that has increased long-term taxpayer liabilities. BPAB recipients are also not required to meet other environmental standards in the RFS such as land use protections that were intended to prevent conversion of wetlands and grasslands to biofuels crops (although the government has failed to properly implement and enforce even this basic standards). Just a few of corn ethanol’s unintended consequences include higher food prices, greater water pollution and soil erosion, greater expenditures on federal crop insurance subsidies as sensitive land such as grasslands are torn up to plant more corn, and higher greenhouse gas (GHG) emissions (instead of reductions that were promised when the RFS was expanded in 2007). Continued subsidies to the mature corn ethanol industry through the farm bill energy title are only undermining other federal policies aimed at reducing GHG emissions, limiting water pollution, etc.

Table 3 lists the top 30 agribusinesses receiving BPAB subsidies for biodiesel production. Biodiesel can be produced from corn oil, feedstocks such as soybeans and other types of vegetable oil, animal fats, recycled cooking oil, etc. Notable companies receiving taxpayer support from 2009-2016 include the Renewable Energy Group, Louis Dreyfus, Ag Processing, Archer Daniels Midland, MN Soybean Processors, and Cargill Inc. The average BPAB subsidy from 2009-2016 for biodiesel facilities was $2.5 million, with some facilities receiving over $15 million. Similar to the generous taxpayer support corn ethanol has enjoyed for the past 40 years, biodiesel companies have also benefited from a $1-per-gallon production tax credit since 2004.[7] Similar to BPAB, the biodiesel tax credit has no requirements for recipients to prove that they are reducing GHG emissions, one of the original goals of government supports for biofuels.

As Table 1 illustrated, projects receiving the smallest amount of BPAB payments converted either woody biomass, sorghum, or seed waste into biofuels or used anaerobic digesters or landfill gas to power bioenergy facilities. This also includes several projects in the unknown category since too little detail was provided by USDA to determine which types of feedstocks are used in the facilities. On average, these payments received $55,000 per project, while corn ethanol and soybean biodiesel facilities received well over $2 million on average from 2009-2016.

Even though BPAB was intended to spur production of advanced biofuels derived from non-food crops, as the program’s title suggests, its funding stream reveals a different story. Instead of helping the cellulosic/next-generation biofuels industry get off the ground, the program is instead funneling taxpayer dollars to large, profitable, and well-known agribusinesses to produce mature biofuels such as corn ethanol and soy biodiesel. Taxpayers should not be forced to fund corporate welfare or mature technologies that result in numerous unintended consequences. The decades of subsidies for these biofuels should be eliminated once and for all.