On Tuesday, the Bureau of Land Management (BLM), a sub-agency of the U.S. Department of the Interior, held a live auction for oil and gas leases in Nevada. The sale, which offered 200 parcels covering 389,176 acres of federal land for oil and gas development, was the first of the year and the largest (by acreage) in more than a decade in Nevada. 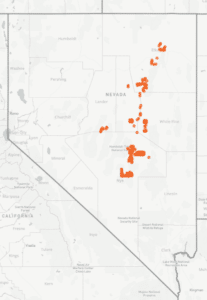 In the auction, bids were placed for only a small portion of the parcels on offer, and most parcels sold for the minimum acceptable price of $2 per acre. The results were consistent with past federal lease sales in Nevada, where increasing use of the BLM’s noncompetitive leasing process by energy producers and speculators has reduced participation in competitive auctions. How BLM’s outdated policies have decreased the fiscal return from oil and gas leasing in Nevada is explained in our new report, “Gaming the System,” which was also released on Tuesday.

During the auction, six different bidders placed 21 bids[1] on 15 parcels covering 22,352 acres – a mere 5.7% of the acreage available for lease in the sale. Of those parcels, 11 received only one bid and were sold for the minimum acceptable bid of $2/acre. The four others individually sold for $4/acre, $7/acre, $22/acre, and $47/acre (see results below).

Such results are typical for Nevada, where 85% of parcels sold at auction over the last five years received the minimum $2/acre, and 95% received $10/acre or less. Across all parcels sold Tuesday, the average bid per acre was $5.94, slightly higher than the 2018 average of $4.34 in Nevada, which was the lowest in the country. Including administrative fees and first year’s rent for each parcel, which is due at the end of the auction, the BLM collected $168,703.

Starting the day after the lease sale, parcels not sold at auction are available for lease for two years through the BLM’s opaque noncompetitive process. By submitting noncompetitive offers, companies and speculators can avoid paying the minimum bid of $2/acre at auction, decreasing the overall return to taxpayers. Over the last five years, the BLM has leased more than 70% of all acres in Nevada noncompetitively.

[1] The BLM’s documentation released the day after the sale reported 23 bids, but two bids never appeared on the auction site during the bidding.