Over the years the coal industry has received billions in federal subsidies, in a variety of forms including direct grants, loan guarantees, tax free bonds, and tax deductions. The following database is an ongoing project to identify specific recipients of these federally-backed subsidies. This first iteration links several Department of Energy subsidies provided for coal-fired power plants that use applicable clean coal technologies dating from 1985 to the present day. 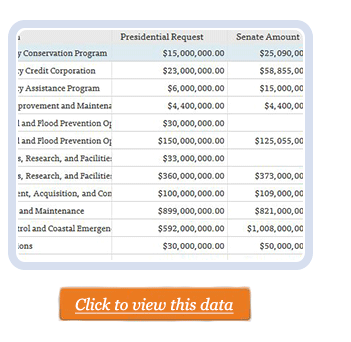 As mentioned above, the database details federal subsidy values as well as project information for approximately 50 coal-based power plants.

Because all of the data we offer is public information, we ask that all users agree to these basic terms of use, that:

Industrial Carbon Capture and Storage (ICCS)
With funding provided through the American Recovery and Reinvestment Act of 2009, the ICCS program is DOE’s latest ‘clean coal’ program for projects seeking to demonstrate large-scale carbon capture and sequestration (CCS) technology. The goal of the program is to develop CCS technologies at a commercial scale through a cost-share subsidy program in which taxpayers could be on the hook for up to 80% of the total project cost. Only one of the three projects selected by the program is coal-based; the other two include a biofuel production plant and a methane/hydrogen production plant. All three projects are currently active as of August 2012.

Clean Coal Power Initiative (CCPI)
The three-part CCPI program began in 2002 and has selected 18 total projects for funding, seven of which have withdrawn, one still in negotiations, and ten of which are active or complete. The goal of the program is to demonstrate a wide variety of advanced ‘clean coal’ technologies at a commercial scale. While the first two rounds of funding for CCPI focused on technologies that reduce a range of pollutants, the third round focuses on commercial demonstration of carbon capture and sequestration technology. The Department of Energy offers cost-sharing subsidies of up to 50% of total project costs.

Power Plant Improvement Initiative (PPII)
This program was established in 2000 with the intent of demonstrating on a commercial scale a wide variety of ‘clean coal’ technologies such as emissions control systems and byproduct utilization at existing and new coal-fired power plants. The PPII was intended to supersede the Clean Coal Technology Demonstration Program of the later 1980s and 1990s. Five plants were initially selected, of which one withdrew. The remaining four projects were completed as of 2008.

Clean Coal Technology Demonstration Program (CCTDP)
The CCTDP was established in 1986 in an effort to reduce acid rain as a result of regional coal-fired power plant emissions. A total of 57 projects were funded, of which 24 withdrew and 33 were completed — a success rate of just 58%. Projects were selected over five rounds of funding through the mid-2000’s, though the last successful project was completed in the late 1990’s.

American Recovery and Reinvestment Act of 2009 (ARRA)
Passed in 2009, ARRA provided up to $3.4 billion in subsidies for ‘clean coal’ technologies. Among the many projects that benefitted from these subsidies was the FutureGen Initiative. This particular project was earmarked for $1 billion. Plagued with constant cost increases and overruns, the most recent project plans aim to create a 250 megawatt ‘clean coal’ power plant by retrofitting a 65 year old power plant in Meredoisa, IL.

For more info on the FutureGen Initiative, click here.