Today the Bureau of Land Management (BLM), a sub agency of the Department of the Interior offered 20 parcels (approximately 19,000 acres) of federal land in Montana and North Dakota for lease for oil and gas development. Industry bid on 14 of the parcels or about 12,000 acres.

Of the 14 parcels that received bids, 8 were leased for less than $10 per acre, with five parcels totaling over 6,000 acres sold for just $2 per acre, the minimum amount the BLM can legally accept. That is, half of all acres that sold were sold for the minimum bid amount, a disappointing outcome for taxpayers. 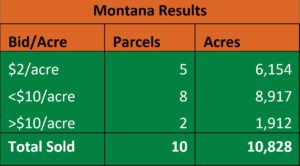 The sale’s average bid of $14.40/acre was altogether low, but the results differed by state. The four parcels of federal land in North Dakota were leased for roughly $81/acre, while the 10 sold in Montana averaged just $7.70/acre. That’s the third lowest average bid for federal oil and gas leases in Montana over the last 7 years.