ReportTaxpayers Lose in Noncompetitive Montana Lease SaleAccording to BLM records, Highlands Montana has secured 227 oil and gas leases covering more than 113,000 acres of federal land since the start of fiscal year 2018, all through noncompetitive offers.

Click here to view this report in PDF format.

In December 2017, Highlands Montana Corporation, a newly incorporated subsidiary of a British company, obtained the rights to drill for oil and gas on more than 110,000 acres of federal land for a song. Understanding how they did this – and avoided paying a market rate to taxpayers for the leasing rights – requires a little background. 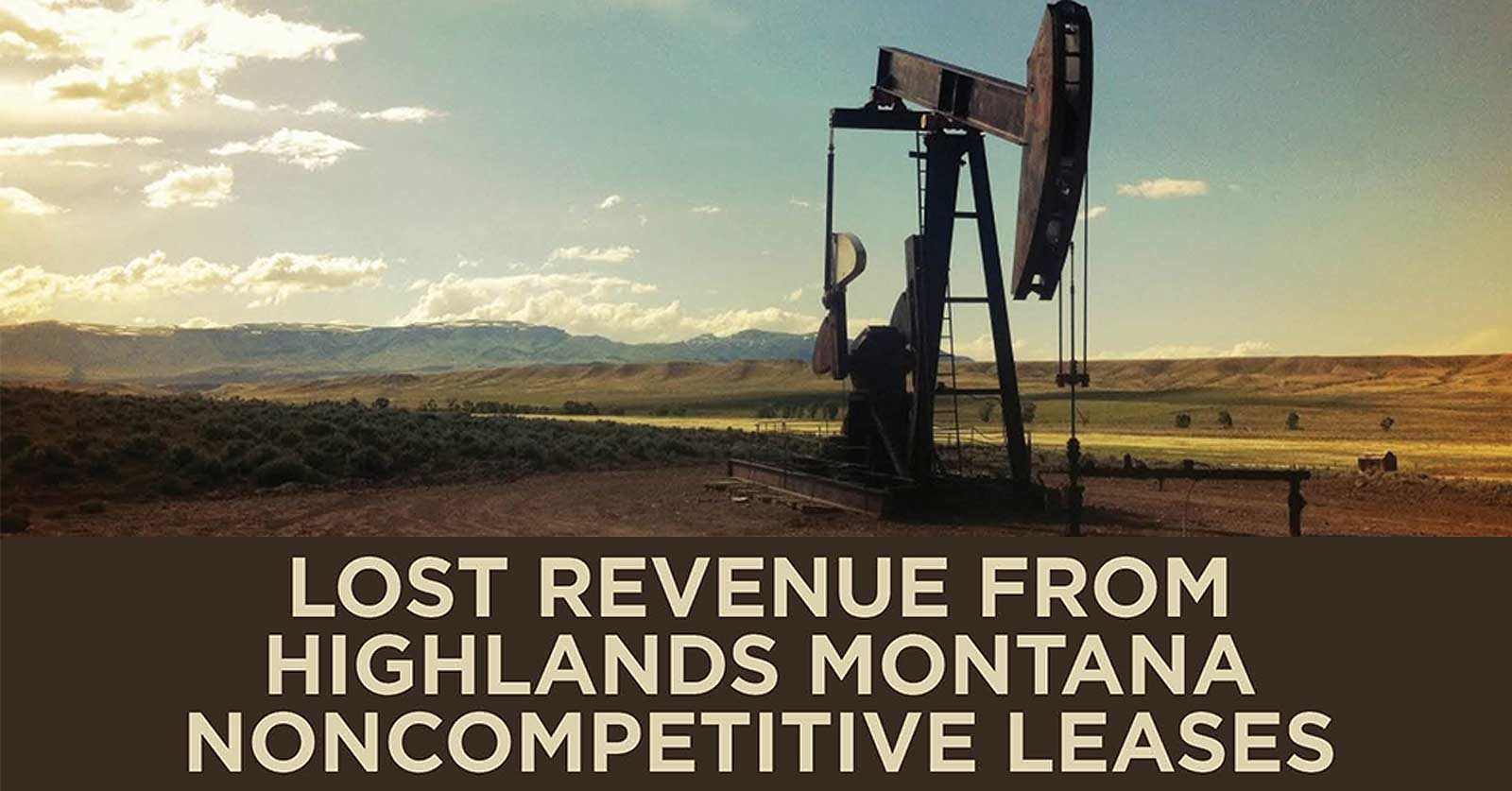 The Bureau of Land Management (BLM) is the Department of the Interior agency charged with managing mineral rights on approximately 700 million acres of onshore federal lands in the U.S. The law requires the BLM to manage the rights to develop oil and gas so that taxpayers receive fair market value for them. But for many reasons – from free on-site use of natural gas to low royalty rates – the BLM’s oil and gas program often fails to generate the return that taxpayers are due. One loophole in the law allows oil and gas companies to lease federal land for next-to-nothing through a noncompetitive process.

In order to be leased for oil and gas development, parcels of federal land must be offered in competitive lease sales, according to the Federal Onshore Oil and Gas Leasing Reform Act of 1987. The BLM regional offices determine which parcels to include in the lease sales, in part, by accepting expressions of interest in specific land from outside parties, like oil and gas producers. After vetting nominated parcels and finalizing which land will be available for development, BLM state offices hold regular lease sales where registered bidders compete in live auctions for dozens of parcels.

At the auction, the highest bidder wins the rights to lease a parcel and then must pay the BLM the final bid amount – the “bonus bid” – plus first year’s rent for the parcel, and a $160 administrative fee. This kind of competitive bidding is the best way to determine a market value for a lease. But not every parcel offered for lease receives a bid – companies limit the amount of capital they’re willing to invest at a lease sale, and often excess parcels don’t get sold.

After an auction, if a parcel hasn’t received a bid, the law requires that it be made available for noncompetitive leasing. Companies or other parties may submit noncompetitive offers for the parcel the very day after a lease sale is held. If multiple offers are submitted, the BLM holds a drawing to see who gets the right to lease the parcel. If no offers are submitted on the first day, the parcel is eligible for noncompetitive lease for the next two years, and the BLM must award a lease to the first eligible party to submit an offer. If the parcel is leased in this manner, the new lessee is required to pay a $75 fee, first year’s rent, and…that’s it. No bonus bid is collected for parcels leased noncompetitively.

In this way, oil and gas producers can gain access to federal land for almost nothing. If BLM offers too many parcels at once, the excess will go without bids. Moreover, the ability to lease federal land noncompetitively presents an obvious incentive to not bid on a parcel during a lease auction. Why pay a bonus bid for the same lease terms for the same federal land if you don’t have to? And why speak up during an auction, where others can outbid you, if you can get the lease noncompetitively days later?

Traditional oil and gas companies have taken advantage of the noncompetitive system for years. But in 2017, one company emerged onto the federal oil and gas scene and demonstrated how to expertly exploit the system – Highlands Montana Corporation.

On December 12, 2017, the Miles City field office of the BLM held an auction for oil and gas leases in Montana. The field office offered 204 parcels of land for lease that day and received bids on 55 of them. The level of industry interest was similar to other recent sales in Montana, and the sale otherwise resembled the 27 other oil and gas lease sales held by BLM offices in 2017, in which companies bid on 942 of 2,525 available parcels.

The posted sale results, however, were far from normal. In addition to the 55 parcels leased through competitive auction, the BLM field office reported that 132 of the remaining 149 parcels received noncompetitive offers the day after the sale. The noncompetitive offers in Montana were unusual because of their scale, the company behind them, and the fact they were publicly reported.

The BLM eventually issued the 132 leases to Highlands Montana Corporation, giving them the right to explore and develop oil and gas on 67 thousand acres of federal land. Which means that while 27 percent of the parcels in the Montana sale got competitive bids, an additional 65 percent went out the door non-competitively.

But those December leases were only part of a bigger land grab by the company over the past year. According to BLM records, Highlands Montana has secured 227 oil and gas leases covering more than 113,000 acres of federal land since the start of fiscal year 2018, all through noncompetitive offers. That’s the most noncompetitive leases issued in Montana in any fiscal year since 1989 – that is, since the modern competitive leasing system was fully implemented. 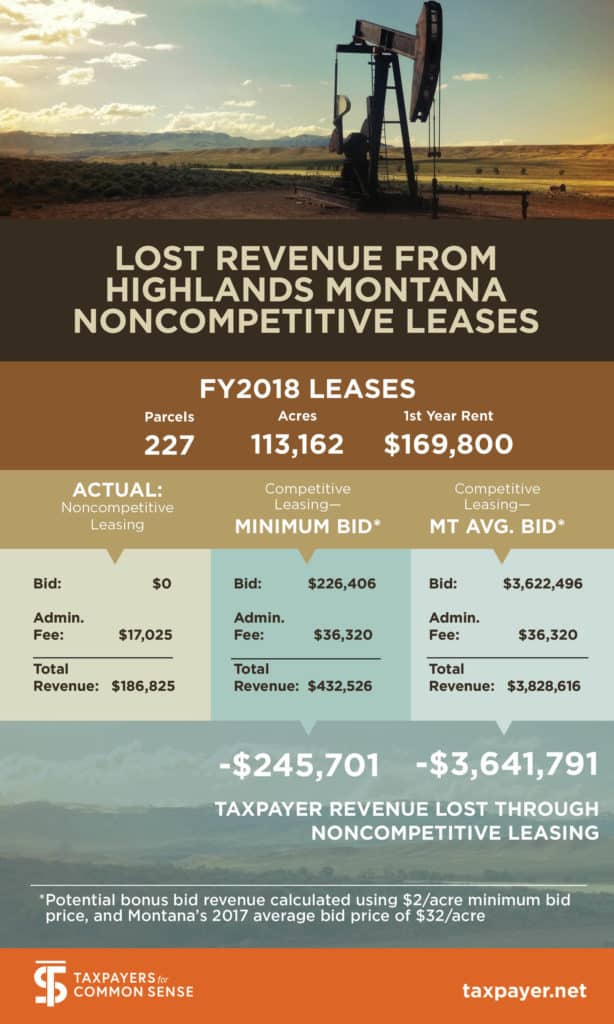 If Highlands Montana nominated the parcels for auction, the company evidently didn’t plan on bidding. At the 2017 auctions, Highlands Montana remained silent. It’s unclear whether the company even registered to bid. After the parcels went unsold, the company immediately submitted its noncompetitive offers, suggesting that it always intended to circumvent the competitive system and avoid paying a bonus bid for parcels it clearly valued. By taking advantage of the noncompetitive system, the company was able to pay taxpayers 57 percent less for the leases in question than if they had been purchased at the legal minimum bid price. The company paid taxpayers $3.6 million less than if the leases had sold for the average bid price in Montana in 2017 – $32.31 per acre.This result is more surprising because Highlands Montana Corp. had not acquired a single federal oil and gas lease before FY2018. The company was incorporated in Denver, Colorado in June, 2016 as a subsidiary of a subsidiary of Highlands Natural Resources PLC, a British corporation run by Robert Price, who’s worked in the U.S. oil and gas industry for years. The company reported its leasing actions in a press release in February 2018 as a component of their Helios Two project, which originally sought to develop helium reserves in the Montana region. There are indications, however, that acquiring large tracts of federal leases was Highlands Montana’s plan all along.

Highlands Montana Corporation knew how to exploit the generous federal oil and gas leasing system when it launched its British invasion of Montana.