This article by Patrick Sisson first appeared in Curbed on May 14, 2019

How can more spending mean worse results? Thanks to American transportation policy, it’s a reality painfully understood by millions of drivers, who commute on a deteriorating network of roads right as local and state transit agencies spend increasing sums of money on new highways.

It’s typically assumed that a lack of funding for basic repairs causes this problem. But according to Repair Priorities, its as much about choices than budget shortfalls. States simply neglect basic repair in favor of expanding roadways: In the last two long-term transportation reauthorizations, states were given increased flexibility to spend federal dollars. Despite long-standing complaints about potholes, crumbling roads, and unfixed highways, they spent as much building new roads as repairing new ones, spending $120 billion on expansion from 2009 to 2014.

Not only does the expansion mean starving transit systems of money for more efficient ways of getting around, such as mass transit, but by adding more and more roadways, state spending priorities inevitably lead to more induced demand, and even more roadway maintenance obligations ignored during the next asphalt expansion. Every new lane-mile of road costs approximately $24,000 per year to preserve in a state of good repair, according to the report.

“Whether during debate over an infrastructure bill or the long-term reauthorization looming next year, the rhetoric I hear over and over again from Capitol Hill and the White House about the need to invest more money in transportation is all about ‘repairing our crumbling roads and bridges,’” said Beth Osborne, director of Transportation for America, in a statement. “But our spending priorities rarely match this oft-repeated rhetoric.”

The vicious cycle of expansion, and the growing burden of maintaining our roadways, has become a significant financial drain, according to the report, which analyzes data from the Federal Highway Administration’s (FHWA) “Highway Statistics Series.” Between 2009 and 2017, the nation built enough new lane miles to criss-cross the width of the U.S. 83 times, new roads that require $5 billion a year extra to keep in good condition.

According to Repair Priorities, the U.S. would need to spend $231 billion per year, for six years, to keep existing roadways in acceptable condition, all while bringing the backlog of roads in poor condition into good repair. That may seem doable. But that amount is more than double what the nation spent on capital expenditures for highways across every level of government in 2015, $105.4 billion.

In addition, Repair Priorities found a rural/urban divide in road investment. Even though rural roads are used by less drivers and typically are in better shape, they still receive roughly the same amount of annual repair funding, $10.7 billion on average, as urban roadways. Urban areas contain approximately 80 percent of the population, yet don’t receive an equivalent share of the overall budget.

There has been increased movement at the federal level for a new infusion of infrastructure spending ever since Trump was elected President. But no grand bargain has been seriously proposed, debated, and voted upon. If your budget represents your politics, then the administration has just added to the road-building frenzy, from stating in the party’s 2016 platform that they hoped to phase out funding for transit to replacing the Obama-era TIGER program with BUILD, a transportation grant program that’s swapped a focus on placemaking and alternative transit for more roads. 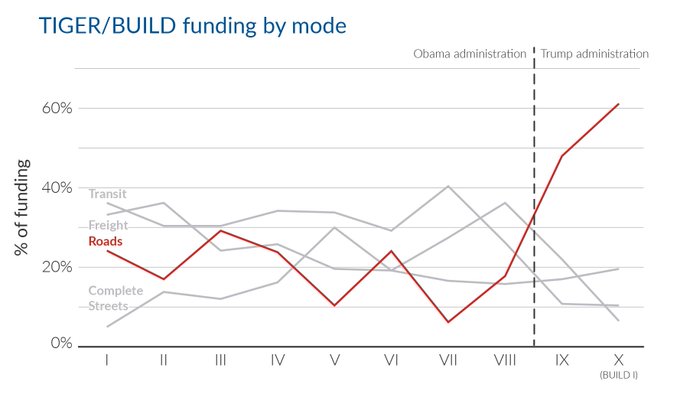 Under President Trump, USDOT has effectively turned the formerly innovative BUILD program into little more than a rural roads program, dramatically undercutting both its intent and utility. http://t4america.org/2019/04/18/taming-the-tiger-trump-turns-innovative-grant-program-into-another-roads-program/?utm_campaign=meetedgar&utm_medium=social&utm_source=meetedgar.com …

Since the Democrats took control of the House of Representatives, there’s been increased talk of an infrastructure compromise. Oregon Rep. Peter DeFazio, the new chairman of the House’s transportation and infrastructure committee, has said he wanted to plan during the first six months of the new Congress, and told Curbed that now is the tim to make wise investments, or pay the price.

Repair Priorities suggests that any planned infrastructure investments should be seen through the light of maintenance and long-term costs. The report lays out four main guideposts for more wise stewardship of our transportation system, and better use of federal money.

In short Congress should guarantee “measurable outcomes” for taxpayers with any new funding. That would include requiring that states repair their existing systems before expanding, requiring project sponsors to demonstrate that they can afford to maintain new roadway capacity projects before they break ground, and tracking progress and require that FHWA publish results. These policies would advance a maintenance-first mindset, and perhaps, when the full cost of widening expressways and maintaining larger roads becomes more of a factor in policy decisions, make alternatives more financially desirable.

Tags: In The News