The Senate Appropriations Committee recently finished its consideration of the Fiscal Year 2020 (FY20) bill to fund the Department of Defense. At just under $695 billion, it’s a whopper.

The committee did meet the new targets put in place by the most recent budget agreement. So, yay for showing the fiscal “restraint” of spending just south of $700 billion. Due in large part to the new agreement, Overseas Contingency Operations (OCO) spending is reined in to $70.6 billion. That’s down from the ridiculous $165 billion the Trump administration requested for the coming fiscal year but still up a bit from last year’s final number of just under $68 billion.

One of the things the appropriators did was reject the Pentagon’s request to fund all ammunition procurement in OCO – as if the military services only use ammunition in furtherance of overseas contingencies. So, yay for that. We guess.

Let’s zero in on just the procurement portion of this bill, clocking in at just under $133 billion. Of that amount, the Senate appropriators are directing $3.2 billion for programs the Pentagon didn’t request at all. These are programs for which, in an overall spending bill of almost $700 billion, the Pentagon requested zero funding.

Behold, the much anticipated…only here at Taxpayers for Common Sense…because we love doing the math…

The Zero to Hero Chart! 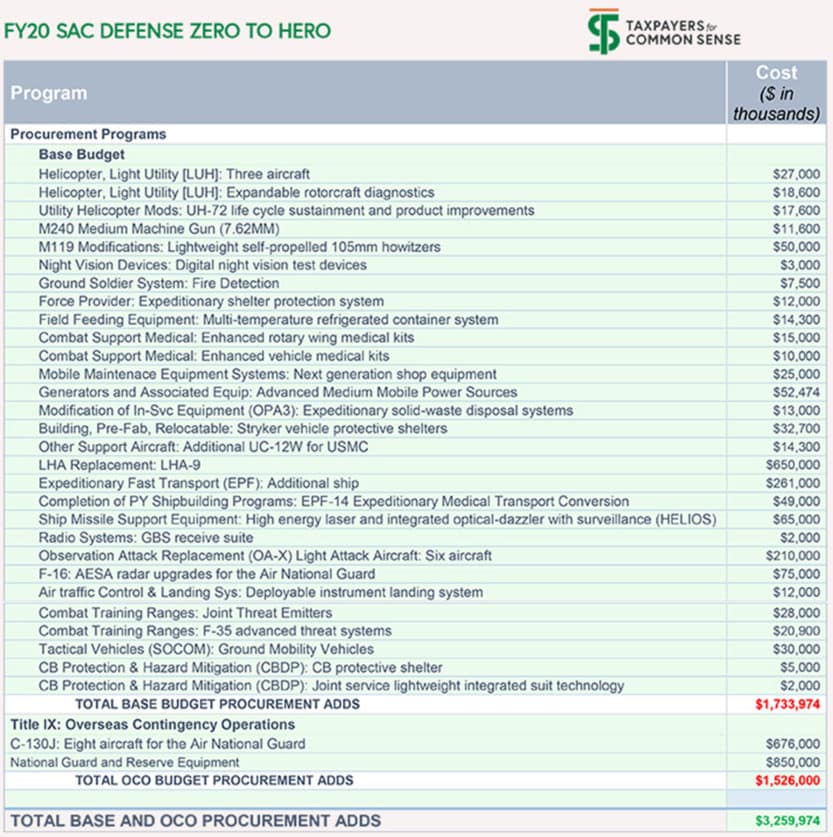 Close readers of TCS analysis of this phenomenon will notice the Senate getting much more aggressive in what it adds to unrequested programs. In FY19, there were only seven procurement programs funded in this way. This year there are 31.

As always, the shipbuilding industry gets the biggest boost from this approach to “budgeting.” We derisively use quotation marks here because “budget” for most people means making hard choices to spend on either X or Y. But, not so much in the Congress.

The big deck amphibious ship LHA-9 receives $650 million where the Navy asked for none. Expeditionary Fast Transports get $261 million with an additional $49 million for EPF-14, the Expeditionary Medical Transport Conversion, er, version. That combines to a cool $310 million.

Another big-ticket item is $210 million to purchase six OA-X Light Attack Aircraft – which apparently hasn’t made it through the entire procurement contracting process.

And in the OCO (cough, off-budget-so-it-supposedly-doesn’t-count, cough) title of the bill there is $676 million for eight C-130Js for the Air National Guard.

Finally, a topic about which we have written much, the totally bogus National Guard and Reserve Equipment Fund gets a whopping $850 million to spend…pretty much anyway they want.

We’ll keep an eye on this trend. But we’ll leave you with this thought – when the budget for a single federal department is close to $700 billion, there’s a lot of room for this kind of shenanigans. The Senate adds $3.2 billion in procurement dollars for things the Pentagon never asked for and in the same week the Secretary of Defense offers up $3.6 billion in previously approved military construction projects to build a fence on the southern border.

It’s enough to make us question the entire process.