Rolling AnalysisOverseas Contingency Operations Spending Would be 2nd Largest Federal “Agency”The Pentagon is #1. That’s in discretionary spending terms. Check out our colorful doughnut chart to help you visualize exactly what that means.

As we have for the past few years, we want to put Overseas Contingency Operations (OCO) request of $165 billion into budget perspective.

In discretionary spending, if OCO was an “agency” of the federal government it would be the second largest. The first largest, the star of the FY20 budget movie, is the Pentagon at $553 billion. The third largest? Veterans Affairs at $93.1 billion. Fourth? Health and Human Services at $89.6 billion.

Having trouble visualizing these numbers? Take a look at our handy doughnut chart.

To put it another way, you’d have to add up the eleven bottom agencies on the budget ladder (the Department of Justice through the Corps of Engineers) to come close to the spending President Trump is requesting for the OCO account. Those eleven agencies account for $162 billion in discretionary spending, still less than the President envisions for OCO. In movie terms, it looks like the president considers them the “bit players.”

Click the graphic below to view our table with specific dollar figures. 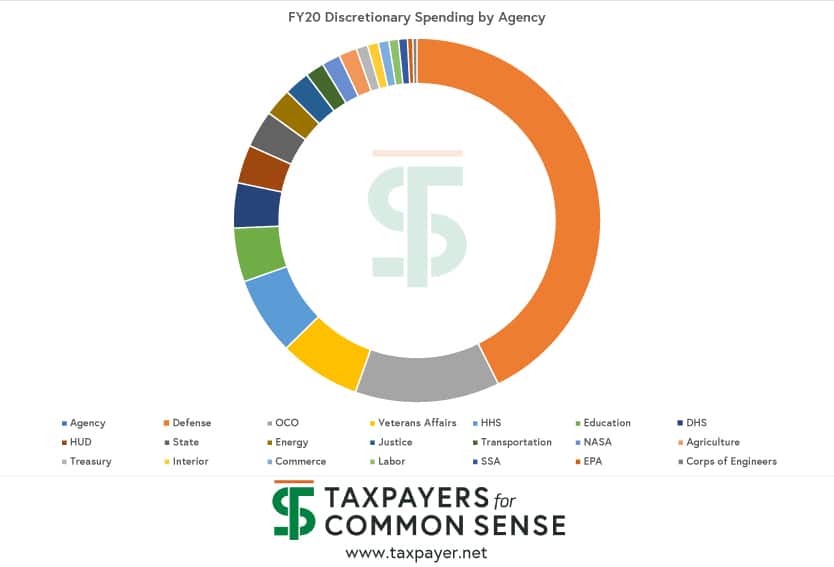