It’s August, which means the 185 million acres of corn and soybeans planted across the nation are well on their way to harvest. It also means that regardless of how the weather fares into the fall, farmers and ranchers are set to reap billions of taxpayer dollars. This is because the farm bill passed last year pretty much guarantees that regardless of the weather, every year is a fiscal disaster for taxpayers.

Producers in drought-ravaged California and the West are notably facing difficulties, but the bulk of farmers raising the bulk of crops are expected to do well. The United States Department of Agriculture (USDA) just projected harvests of most crops, including corn and soybeans which are the two most popular, are expected to be a tad shy of last year’s record harvests. Prices may dip a bit, but it’s pretty much business-as-usual and what everyone expected when they planted in the spring.

In case you’re tempted to see the silo as half-full, rest unassured that much of farm country is experiencing a disaster, at least as decreed by the USDA. Just this week the USDA declared 53 counties in Indiana primary natural disaster areas due to rain and flooding that’s occurred since May 1st.  This pushes the number of agriculture disaster assistance eligible counties over the 1,000 mark. For the record, there are 3,143 counties or county-equivalents in the country. Farmers and ranchers in the designated counties are now eligible for a number of programs including taxpayer-subsidized, low-interest operating loans, and payments from four supplemental disaster programs that cover everything from cattle to fruit trees to honeybees. 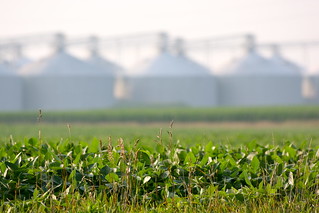 The problem with USDA’s disaster declarations is that it’s always a “disaster” somewhere, and some places, especially west Texas and the Dakotas, seem to be declared a disaster every year. In 2012, 88% of counties were declared an agriculture disaster. In 2013 it was 68%. Last year, despite near perfect growing conditions in most of the country and a record harvest for corn and soybeans, 41% of counties were declared disasters; some more than once. Drought was often the stated cause, but some experienced flooding, heavy frost, hail, or pests. In fact there are 25 potential disaster categories. Some distinctions seem esoteric: tornadoes, thunderstorms, high winds, and hurricanes each have their own category. Perhaps a classification for sharknadoes might be in the offing. But thankfully, no county’s been declared a disaster due to volcanoes, tidal surges, ice flows, or blizzards this year, though it’s early.

If a certain area is routinely a “disaster” for farming and ranching, it raises the question of whether it’s the growing conditions or policymakers’ management of tax dollars that is truly disastrous. We’ve seen disaster creep in other federal programs, most notably FEMA. There, the threshold for declaring a disaster keeps getting lower and lower because doing so frees up federal money for states. The same fever for federal funds seems to be infecting USDA and not just in its “disaster” programs.

There are dozens of programs and policies designed to shift costs from agricultural businesses to taxpayers. Farmers and ranchers in the 2,000 counties that haven’t yet experienced a USDA-declared disaster in 2015 are also set to receive billions in disaster-like aid. Payments under new “shallow loss” income entitlement programs begin this fall. These programs are designed to cut checks from the Treasury when a farmer’s income dips as little as 10% from what they expected. Originally touted as money savers, these programs are now a projected $9 billion more expensive than promised. And federally-subsidized crop insurance, where taxpayers are on the hook for insurance policies that guarantee up to 85% of a farmers revenue, is projected to cost almost $9 billion this year. Again, this is a relatively good growing year.

A federal agricultural safety net that helps protect farmers and ranchers from unforeseen and unmanageable crop losses is something many people can support. A complicated web of federal farm policies that “get us through bad times and make the good times better” by treating every imaginable change in the weather as an excuse to cut checks from the Treasury, is not.