Over the past decade, biofuels have been portrayed as a way to help achieve U.S. energy independence, reduce greenhouse gas (GHG) emissions, and spur rural economic development. However, the industry has failed to achieve these goals while spurring numerous unintended consequences, and long-term liabilities resulting in more harm than good. Taxpayers have also paid out tens of billions of dollars in subsidies, special interest tax breaks, and other forms of support to entities throughout the supply chain. Growers, producers, oil and gas companies, fueling stations, and others have benefitted from government handouts. Biofuels also enjoy a guaranteed market, mandated by the government, through the Renewable Fuel Standard (RFS).

Corn ethanol and advanced biofuels are the two primary types of renewable fuel that receive both taxpayer subsidies and a guaranteed market through the RFS. Despite Congressional intent to help spur production of the next generation of biofuels produced from non-food crops through the RFS (primarily cellulosic biofuels derived from agricultural and forest residues), the cellulosic industry has only achieved 5 percent of its mandate set forth in the 2007 energy bill. Meanwhile, production of corn ethanol has soared, resulting in higher food and fuel prices, small engine problems, and greater GHG emissions and water pollution as millions of acres of land have been converted into corn production since 2007. Most corn ethanol production was grandfathered into the RFS, meaning it was not required to meet even a minimum 20 percent GHG reduction threshold. Several independent analysts – including the Government Accountability Office (GAO), Congressional Budget Office (CBO), and the National Academy of Sciences (NAS) – have recently questioned the RFS’s ability to achieve its goals given the slow development of advanced and cellulosic biofuels. They have also questioned the fact that the mandate has primarily been filled with corn ethanol – a biofuel that may actually increase GHG emissions.[ii] As the GAO recently concluded, “It is unlikely that the goals of the Renewable Fuel Standard will be met… because there is limited production of advanced biofuels to be blended into domestic transportation fuels.”[iii]

Domestic biofuels policy is primarily supported by three major pieces of legislation, 2005 and 2007 energy bills, and the farm bill. Annual tax credits are also renewed in various tax extenders and other legislation. The 2005 energy bill established several supports for advanced biofuels, including the renewable diesel and biofuels infrastructure tax credits, but more importantly, it was the first time the U.S. mandated consumption of renewable fuels. The first RFS required 7.5 billion gallons (BG) of renewable fuels to be blended with gasoline or diesel by 2012. In the 2007 energy bill, the RFS was greatly expanded to require 36 BG of biofuels to be consumed by 2022. The RFS2, as it is referred to, requires the following number of gallons of renewable fuels to be blended with gasoline and diesel each year (see Table 1 ). However, in 2016, for instance, the Environmental Protection Agency (EPA) – the Agency responsible for administering the RFS – reduced the RFS total renewable fuel mandate from 22.25 BG to just 18.11 BG, given lower actual production of cellulosic and advanced biofuels than previously expected.[ii]

As stated above, production of cellulosic biofuels has fallen significantly (more than 90 percent) below Congressional mandates. Figure 1 (below) shows the discrepancy between Congressional mandates for cellulosic biofuel consumption (required by law) and actual mandates that were revised downward by EPA in each of the past several years (referred to as RVOs, or Renewable Volume Obligations). Meanwhile, corn ethanol production has easily reached its statutory mandate of 15 BG (as of 2017).[xi] 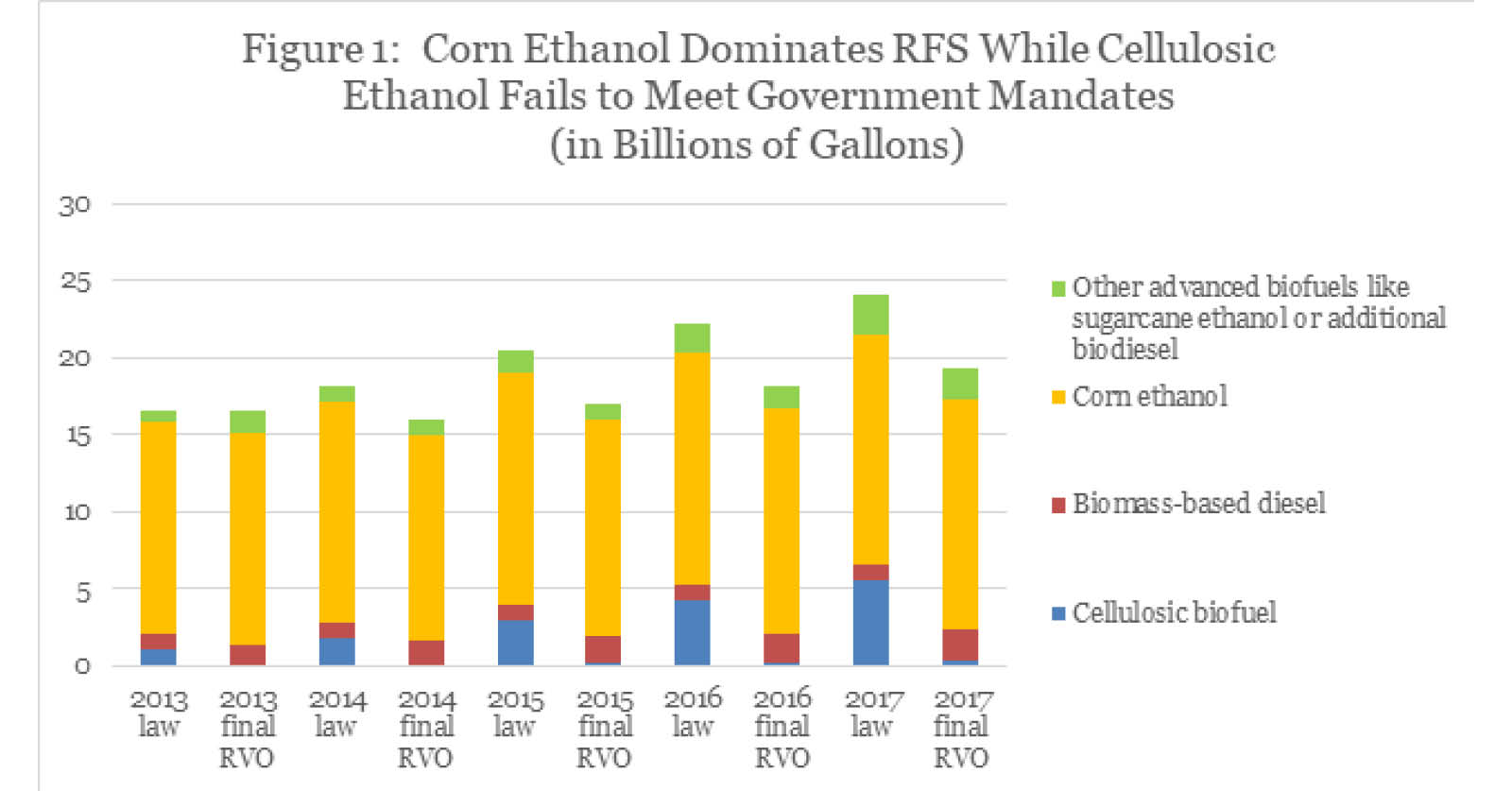 The RFS2 specifies that two different categories of renewable fuels – conventional ethanol and advanced biofuels – be used in increasing amounts through 2022. Both must be produced from “renewable biomass” to qualify as RFS-approved feedstocks, defined in the 2007 energy bill as one of the following:

However, while Congress enacted protections for native grasslands, wetlands, and other sensitive acres, the EPA has failed to properly implement and enforce these regulations.[ii] This has led millions of acres of wildlife habitat and other sensitive land to be converted into biofuel feedstocks production – primarily corn and soybeans.[iii] This land conversion, driven by farmers responding to government mandates and subsidies, has also caused GHG emissions, water pollution, soil erosion, etc. to increase.

Table 2 (below) distinguishes conventional ethanol from advanced biofuels by comparing their statutory definitions, volume requirements, and providing examples of each. The table also specifies the percentage reduction in GHG emissions that each fuel must achieve to qualify as an RFS2-approved biofuel. Table 3 (below) further describes the three different categories (cellulosic biofuels, biomass-based diesel, and “other” advanced biofuels) that make up the 21-billion-gallon advanced biofuels mandate. Hence, the advanced biofuels are sometimes referred to as a “nested” mandate.

Table 2:  Types of Biofuels Mandated in the RFS

Table 3:  Types of Advanced Biofuels Mandated in the RFS

Costs and Unintended Consequences of the RFS

While corn ethanol was once promised to be a “bridge” to advanced and cellulosic biofuels, it has failed to spur meaningful production of non-corn-based biofuels that significantly reduce GHG emissions. This is despite several decades of generous subsidies and government mandates. Mandates and subsidies for corn ethanol and other food-based biofuels have also spurred numerous unintended consequences and costs for both consumers and taxpayers. And since the U.S. has hit the “blend wall,” or the maximum amount of ethanol that can safely be blended into the current vehicle fleet (without harming older vehicles or small engines), corn ethanol is also crowding out the development of next-generation cellulosic biofuels.

Just a few of the numerous direct and indirect costs of the RFS for consumers and taxpayers include the following:

Current Status and Future of the RFS2

With corn-based biofuels increasing their market share, production of non-food-based biofuels has fallen significantly below Congressional RFS mandates. However, while cellulosic and advanced biofuels were intended to improve the environment, some experts question the environmental and consumer benefits of these biofuels, particularly if the RFS spurred large production levels of perennial grass-based biofuels, for instance. Since they may be planted on former cropland, current food and feed production may be displaced as production ramps up, resulting in conversion of other sensitive land to cropland to make up for food and feed losses, resulting in more GHG emissions, soil degradation, etc. Lessons should be learned from decades of subsidies for corn ethanol and soy biodiesel: when government mandates push biofuel production beyond what the market would otherwise demand, taxpayers and consumers lose. In addition, soil health may also be harmed if significant amounts of agricultural residues like corn stalks, cobs, and leaves are removed from farmland after crop harvests to produce cellulosic ethanol. While current production of corn stover-based cellulosic ethanol is small compared to corn ethanol, several companies are working to scale it up in the future. These are just a few of the unintended consequences that could arise in the future if RFS mandates are greatly scaled up.

In summary, the RFS mandate has failed to achieve its objectives and has instead created long-term liabilities that cause more harm than good. The RFS has increased food and fuel costs for consumers, caused environmental damage, and failed to significantly reduce GHG emissions. Federal subsidies, tax credits, loan guarantees, and other supports for biofuels have wasted taxpayer dollars on the mature corn ethanol and soy biodiesel industries. Instead of picking winners and losers through mandates, the tax code, and other federal programs, the government should allow the biofuels industry to compete on a level playing field without market distortions. Taxpayers deserve energy and agricultural policies that limit long-term liabilities, stand up to special interests, and prevent unintended consequences instead of promoting biofuels that waste taxpayer dollars and increase consumer costs.