“The federal coal program is a disaster. If a private landowner ran their business the way the BLM runs the coal program, they would go bankrupt. Acknowledging the need to reform the program is a step in the right direction, but there must be follow through.  Continuing coal leasing under the current system will mean more of the same: more non-competitive leases sold for less than a dollar a ton. By restarting the leasing process without changing the script, the Administration has guaranteed that taxpayers will continue to lose from the bad business practices of the BLM.”

On January 11, 2017, the Department of Interior’s Bureau of Land Management (BLM) released the latest results of its multi-year review of the federal coal program.

After conducting a series of listening sessions across the country in the summer of 2015, the BLM announced a formal programmatic review in April 2016. This summer, the BLM received more than 200,000 comments on the need to modernize and reform the federal coal program. In 2013, TCS released a report Federal Coal Leasing: Fair Market Value and a Fair Return for the American Taxpayer arguing for the program’s overhaul.  It has been more than three decades since the federal coal program has been reviewed.

“It is our sincere hope that the next Secretary of the Interior will follow through with a review of the federal coal program. It is a disservice to taxpayers, and to the states and towns that depend on revenue from coal mining, to ignore the well-documented problems with virtually every aspect of the process. Allowing the coal industry to control the leasing process and game the system has robbed taxpayers and harmed communities. If the next Administration or Congress want to bail out the coal industry, then they should do it in a transparent and accountable way, instead of undercutting an attempt to fix this broken system.”

Coal is an important energy fuel in America: more than 90 percent of coal mined in America is used to generate electricity. 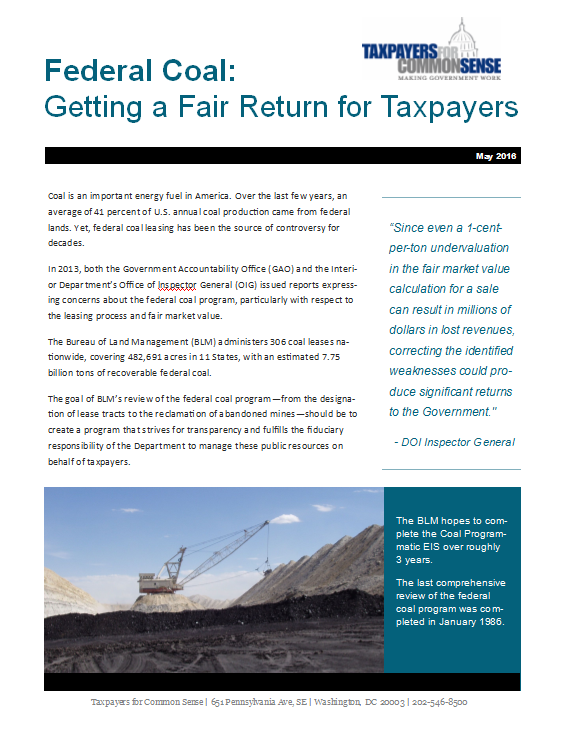 Federal Coal: Getting a Fair Return for Taxpayers

In January, the Secretary of the Interior directed the Bureau of Land Management (BLM) to conduct a broad, programmatic review of the federal coal program to identify and evaluate potential reforms. The goal of BLM’s review of the federal coal program—from the designation of lease tracts to the reclamation of abandoned mines—should be to create a program that strives for transparency and fulfills the fiduciary responsibility of the Department to manage these public resources on behalf of taxpayers.

Taxpayers are not receiving a fair return from the mining of coal on federal lands. Taxpayers for Common Sense welcomes the decision by the Bureau of Land Management to consider reforming the federal coal program, including increasing the royalty rate companies pay to federal taxpayers for the right to mine and sell publicly owned coal. Federal coal has one of the lowest effective royalty rates among natural resources managed by the BLM. BLM should review all of the ways in which the federal government is being shortchanged, including the Lease by Application process that allows industry to control where leasing occurs and results in non-competitive and below fair market value bids for federal coal leases. BLM has a fiduciary responsibility to taxpayers to responsibly manage all public assets, the development of which represents a significant revenue source for the federal government.

TCS supports the use of gross proceeds from the first arm’s-length sale as an alternative to the existing benchmarks. The Mineral Leasing Act vests responsibility in DOI to charge royalties based on the actual value of publicly owned minerals. Under current rules, the value may be set in non-arm’s-length sales between two entities with interlocking ownership, allowing the entities to collude and set a low price to reduce royalties. The proposed rule would ensure that the value for royalty recovery in a non-arm’s-length transaction is established through the price set in sales between unrelated parties – the economic gold standard of “arm’s-length transactions” establishing value in the market. While efforts by DOI to estimate value have become more accurate over time, this proposal will look to actual transactions to set value, which is obviously the best reflection of value in the market.

TCS urges ONRR to consider how it can reform the federal coal system to increase revenues and ensure a fair return to taxpayers. Multiple reports from the Government Accountability Office (GAO-14-140) and the Inspector General at DOI (CR-EV-BLM-0001-2012) have criticized the federal coal program for failing to capture a fair return for taxpayers. One option that is within the scope of this rule is to reform the existing system for valuation of arm’s-length sales, in addition to the proposed reforms to non-arm’s-length sales. The predominant leasing process currently used by the Bureau of Land Management (BLM), the agency within the Department of the Interior (DOI) that manages the federal coal leasing program, does not obtain fair market value for taxpayers. It seldom generates competitive bids, and studies indicate that the resulting losses are substantial.  Additional and potentially larger losses may be in store if certain current leasing practices continue and markets for exported federal coal expand.

Estimates of losses from BLM practices from 1983 to date run as high as almost $29 billion.  The DOI Inspector General (IG) documents that “even a 1-cent-per-ton undervaluation in the FMV calculation could result in a $3 million revenue loss” in the average lease sale in the Powder River Basin (PRB) of Montana and Wyoming.  Still more revenues are lost as part of the royalty collection processes when the full value of exported coal is not considered, possibly as much as $40 to $100 million in recent years.

Congress has repeatedly and expressly directed federal agencies to ensure a fair return to the government for the development of public assets, such as coal. Yet, DOI’s coal leasing program has been the subject of repeated cycles of audits, studies, moratoria, legislation, and new regulations, all attempting to uncover and cure problems that cost the government and taxpayers money. New concerns over current and future revenue losses have resulted in another round of audits and studies of agency regulations and practices. So why are taxpayers still losing money on federal coal?

For centuries, coal producers in the U.S. regularly abandoned their mines when on-site operations ended, leaving tens of thousands of hazardous features with substantial cleanup costs scattered throughout the country. To prevent such harmful practices, legislation was passed in 1977 requiring coal mining operators to restore all land affected by their operations, and post a bond to cover reclamation costs in the event they fail to complete such work themselves. With many coal companies now under financial strain, the strength of the law’s bonding requirements, particularly the ability it grants certain companies to “self-bond,” is being tested. As a result of insufficient guarantees provided by self-bonding, taxpayers may be saddled with billions in new reclamation costs.

According to data obtained from the Office of Natural Resource Revenues (ONRR), which manages the annual revenues from federal energy and mineral leases, BLM has reduced the royalty rates on federal coal leases frequently during the last 25 years. Of 80 federal leases in nine states, 35 of them (44 percent) recorded royalty rates less than the minimum of 12.5 percent for surface mines and 8 percent for underground mines. More than half (16 of 28) of the royalty rate reductions occurred between 2001 and 2007.