When More is Never Enough

The House and Senate Appropriations Committees have, belatedly, started plowing through the individual appropriations bills that are necessary to keep the government open as we approach the beginning of Fiscal Year 2019.

The largest single appropriations bill funds the Department of Defense. At roughly $675 billion, there is a lot of room in this legislation for Members of Congress to get up to some fiscal mischief. And they do. In an overall President’s Budget Request of $700 billion (across those three bills mentioned above) outside observers may not know or believe there couldn’t be a lot that the Pentagon needs that they didn’t actually ask for. But as seasoned veterans of the budget process here at Taxpayers for Common Sense, we put on our green eyeshade, pull out our magnifying glass, and went through the Procurement and Research and Development (R&D) funding tables line by line. Because that’s where they hide the program increases – in plain sight.

First, we’ve compiled our “Zero to Hero” charts. That’s where we pull together into one handy document all the unclassified Procurement and R&D line items where the Pentagon asked for precisely zero dollars but the Congress forced money on them anyway.

In the House Appropriations Committee the Zero to Hero chart totals $2.8 billion: 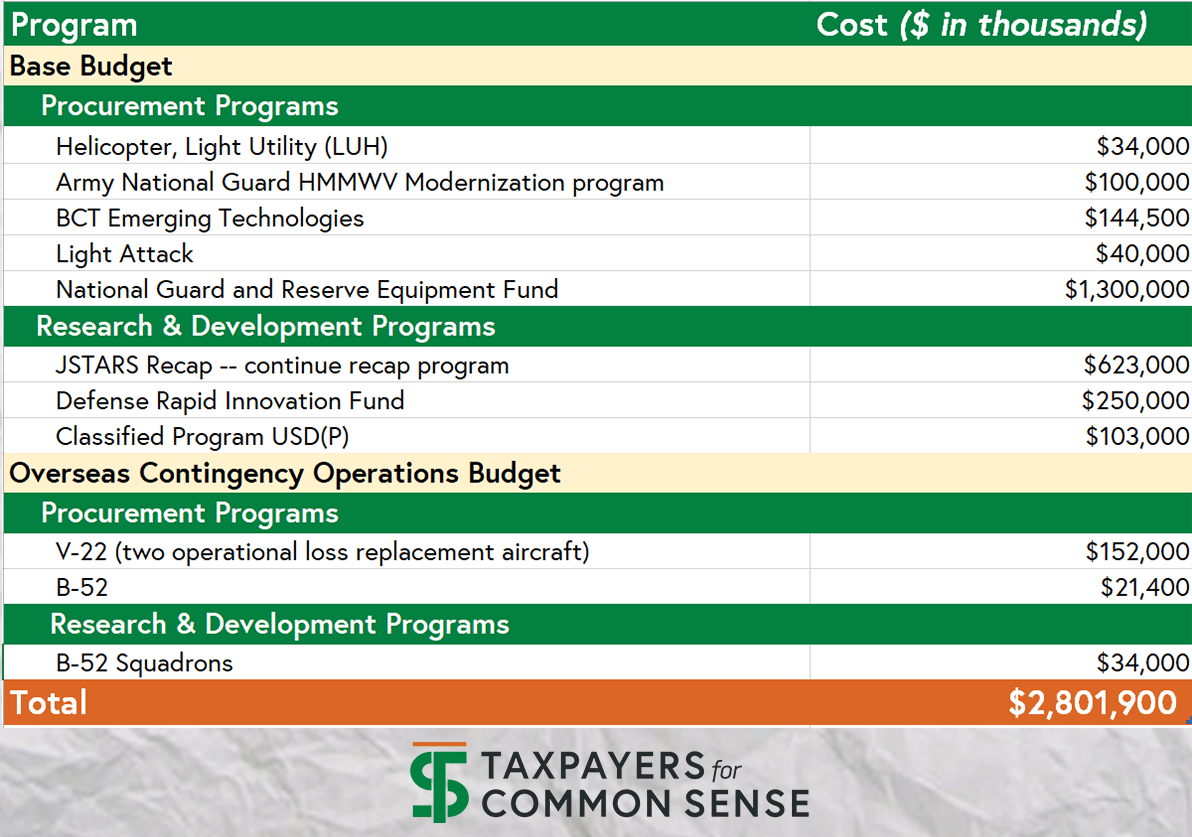 In the Senate Appropriations Committee the same analysis shows $3.1 billion:

What do you notice about these two charts? For starters, there is very little overlap. The huge boondoggle known as the National Guard and Reserve Equipment Fund shows up on both charts, but at different funding levels. Emerging Technologies for Brigade Combat Teams are funded in both bills and for the same amount – highly unusual! And a classified R&D program evidently run by the Office of the Under Secretary of Defense for Policy is funded in both bills for almost the same amount of money. (And we find it highly interesting that USD(P) has been running an R&D program at fairly high levels of funding for several years. Somehow it never makes it into the President’s request, but Congress keeps funding it. Guess we’ll never know since it’s classified.) The takeaway is that the final tally of Zero to Hero for Fiscal Year 2019 will likely be a mash-up of both lists and close to $6 billion!

Second, we found it highly suggestive that the House Appropriations Committee added some substantial amounts of money to major weapon programs that were in the budget request – but not at a high enough level to satisfy the Congress. Or is it the contractor that wasn’t satisfied? In particular, one single contractor: Lockheed Martin.

A careful reading of the major weapon programs increased by the House Appropriations Committee, Subcommittee on Defense (HAC/D) shows the lucky winner of potentially greatest largesse to be the Lockheed Martin Corporation. Of $4.6 billion added, $3.5 billion would go in whole or in part to Lockheed.

And the chair of that subcommittee is Rep. Kay Granger (R-TX). And Rep. Granger’s district includes a major Lockheed Martin production facility.

We’ll just leave that there.

What is the problem with these additions, you ask? Doesn’t Congress have the power of the purse?  These additions are a perfect example of one of the central reasons our debt is larger as a percentage of GDP than it has been since World War II: instead of making choices and setting priorities at the Pentagon, Congress just adds and adds and adds spending. And you know what they say about: a billion here, a billion there and pretty soon we are talking about real money. Meanwhile, nothing like the last quiet days of the Fourth of July holiday for us to do the same analysis of the major program increases done by the Senate Appropriations Committee. If we find a similar, interesting pattern in spending increases, we’ll report about it here.