In the first two weeks of December, the Bureau of Land Management (BLM), an agency within the Department of the Interior, held eight lease sales offering more than 3 million acres of federal land for oil and gas development in 12 states ranging from Arizona to Alaska. The lease sales had mixed results, underscoring the difference in markets for federal oil and gas leases in different states. (Full results are here.)

Together, the eight lease sales contributed to a significant uptick in the amount of federal land available to the oil and gas industry for lease in the last two years. The 16.8 million acres offered for lease by BLM in 2017 and 2018 outpaces the combined total of 14.1 million acres offered in the preceding four years (2013-2016).

Of the 553 different parcels comprising 3 million acres on offer in the December sales, roughly half received bids. Those parcels, however, only contained 13.4 percent of the available acreage, reflecting the low interest for parcels in the National Petroleum Reserve in Alaska (NPR-A) where just six percent of the 2.9 million acres available received bids. In that sale, 16 out of 254 parcels garnered bids, with an average bid of $8.81 per acre. Only one of the 13 other NPR-A sales held since 1999 recorded a lower average bid.

Among the eight December sales, though, the BLM received lower average bids in both Nevada ($2.00 acre) and Wyoming ($3.33/acre). The low bidding in Nevada was consistent with other recent sales there. Of the 35 Nevada parcels sold in competitive auctions in 2018, more than three quarters (27) received the statutory minimum bid of $2.00 per acre. In another development characteristic of Nevada oil and gas leasing, the BLM reported that four parcels received noncompetitive offers the day after the December sale. In total, more parcels have been leased through the noncompetitive system in Nevada than through competitive auctions this year, depriving taxpayers of significant bid revenue. (More on the noncompetitive leasing process here.)

On the other end, the BLM reported its highest average bid – $431.30 per acre – in the auction conducted by its New Mexico office. That sale, for parcels in New Mexico, Texas, and Oklahoma, generated $39 million in total bids, 87 percent of the total bid revenue from the eight sales. The sale also demonstrated the volatility of the market for oil and gas leasing. In the New Mexico lease sale in September, parcels in Eddy and Lea counties near coveted oil reserves garnered an average bid of $41,950 per acre. In the recent December sale, the 42 parcels in Eddy and Lea counties received an average bid of just $631 per acre.

Overall, the eight lease sales were marked by low bid rates. Parcels sold for bids lower than the average in 2017-2018 sales in seven of the eleven states with enough data for comparison. For a summary of the results of the eight sales, see the chart below. 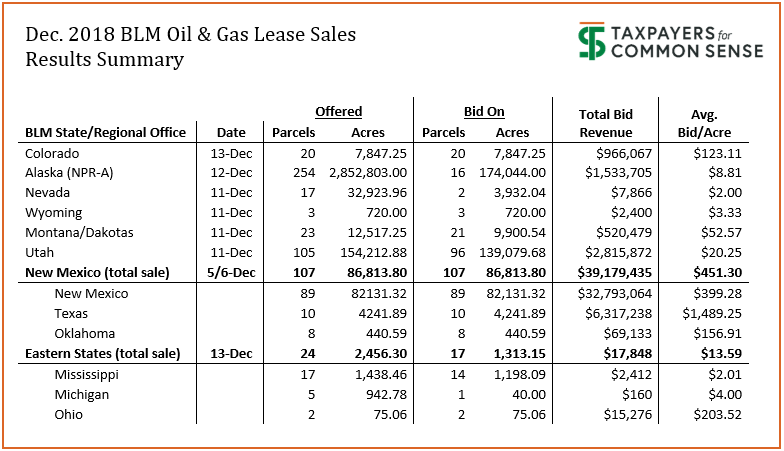