The Environmental Protection Agency (EPA) has sent its 2021 renewable fuel blending levels to the White House for review. If given the green light, EPA’s proposal will set the amount of biofuels that  need to be blended into fuel sold across the country in the coming year, a policy known as the Renewable Fuel Standard (RFS). The proposed rule for 2021 is fresh evidence of the RFS’ failure and the costs it imposes on both taxpayers and consumers.

Created in 2005, the RFS was billed as a means to foster  advanced biofuels industries that would reduce greenhouse gas (GHG) emissions and catalyze rural economic development. But the program has not met these goals. Instead, the federal mandate has pushed more conventional corn– and soy-based ethanol into the fuel supply. The RFS’ failure has increased fuel costs and GHG emissions, and harmed public health and the environment by incentivizing the conversion of grasslands to corn and soybean fields.

The RFS as amended by Congress in 2007 mandates that 33 billion gallons of fuel be mixed into the domestic fuel supply in 2021. But EPA is likely to revise that number down as it has for the past seven years. Despite generous subsidies and guaranteed sales, negligible growth in the advanced biofuels sector has kept the RFS below statutory levels since 2013 (see chart below). Advanced sources of biofuels, like cellulosic ethanol, were intended to make up an increasing share of the mandated biofuel consumption, but established industries like corn- and soybean-based ethanol continue to make up the majority of biofuels blended into fuels under the RFS.

After 15 years of this failed policy, it is past time to scrap the RFS before it creates further unintended consequences. 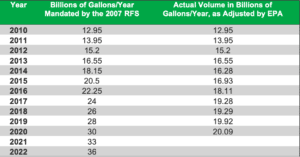