When is a “Program Increase” Really a Backdoor Earmark?

When is a “Program Increase” Really a Backdoor Earmark?We scour the charts and find the dollars for you.

The report of the Subcommittee on Defense of the House Committee on Appropriations is, as usual, chock-full of directives to channel money in ways the Administration never requested.

As the old saying about budgets goes, “The President proposes and the Congress disposes.” The Constitution does hand the reins of federal spending to the Article I branch of government. And we don’t believe the Congress should ever be a rubber stamp of a Presidential Budget Request. But long time followers of Taxpayers for Common Sense know our attitude toward earmarking. That is, adding funds for specific programs at the behest of, in the case of the Pentagon, the contractors who will benefit from those earmarks.

Earmarking is not the sole province of the Pentagon, but the Defense Appropriations bill is the subject at hand.

Since “traditional” earmarking was abolished, Congress has become adept at new ways to add funds. Besides the obvious increases above whatever the Pentagon has asked for regarding an existing program (cough – the F-35 – cough) Congress also gives money to procurement programs and specific lines in the research and development accounts for which the Pentagon requested NOTHING! We track all those in our justifiably famous “Zero to Hero” charts each year.

But another layer down in this sneaky pork barrel of directed spending are the hundreds of “program increases” within existing research and development budget lines.

This year TCS identified more than 340 of these “program increases.”

Scroll down for details on Navy, Air Force, Space Force, and Defense-Wide.

In Research & Development, Navy the Pentagon requested $21.4 billion. The House Appropriators gave the service $1.2 billion less for a total of $20.1 billion (figures are rounded). But in addition to cutting $1.2 billion, the Committee shifted $523.3 million from programs requested by the Pentagon, to those selected by the House Appropriations Committee. There are 75 specific research and development programs added. Simple mathematics, at which we excel, says the average dollar figure for an increase is $6.9 million.

It’s easy to miss all the little programmatic adds that are, literally, in the fine print of the budget charts. But, that’s why you read the expert analysis we do here at TCS. To point out just a few in the Navy R&D tables:

You can look at all the adds on this handy-dandy chart.

Research & Development, Air Force the Pentagon requested $37.3 billion. The House Appropriators gave the service $1.3 billion less for a total of $36 billion.  In addition to the $1.3 billion reduction, $463.3 million was shifted away from Pentagon priorities and given to programs selected by the House Appropriations Committee. This money went to 45 specific research and development programs. Again, doing the math, the average dollar figure for an increase is $10.2 million. (We’ve always said Air Force programs are inexplicably costlier than the other services. Here’s more proof.)

And you can peruse all the Air Force R&D programs that are getting something when nothing was requested on this chart. 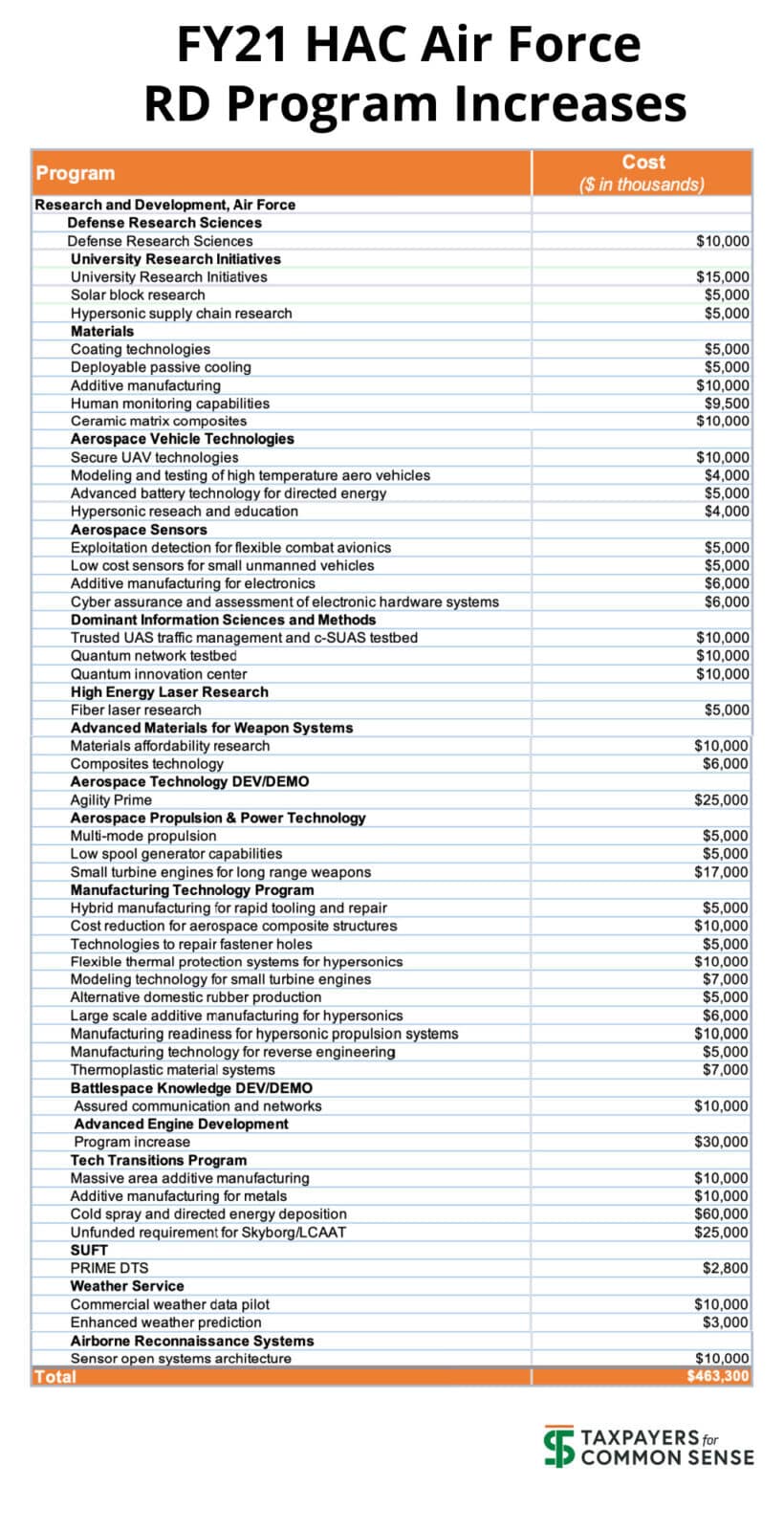 Additionally, the Army has a whopping 136 adds for specific R&D programs. The Space Force (NEW this year!) has a mere nine adds. And “Defense-Wide” which is largely Special Operations programs has 78 adds.

In Research & Development, Space Force the Pentagon requested $10.3 billion. The House Appropriators gave the service $139.7 million less. But in addition to cutting almost $140 million, the Committee shifted $65 million from programs requested by the Pentagon, to those selected by the Appropriators. There are 10 specific research and development programs added.

Line #1: Space Technology is as vague as it sounds. Cue the House Appropriations Committee to add $30 million for four program increases. These include the suspiciously specific “Thin film photovoltaic energy” for $7 million and “Ultra-lightweight solar arrays” for $5 million. But our favorite is in Line #7: Space Control Technology. That includes a $5 million program increase for “High-thrust gridded ion engine” which we have to point out would be a great name for a garage band! 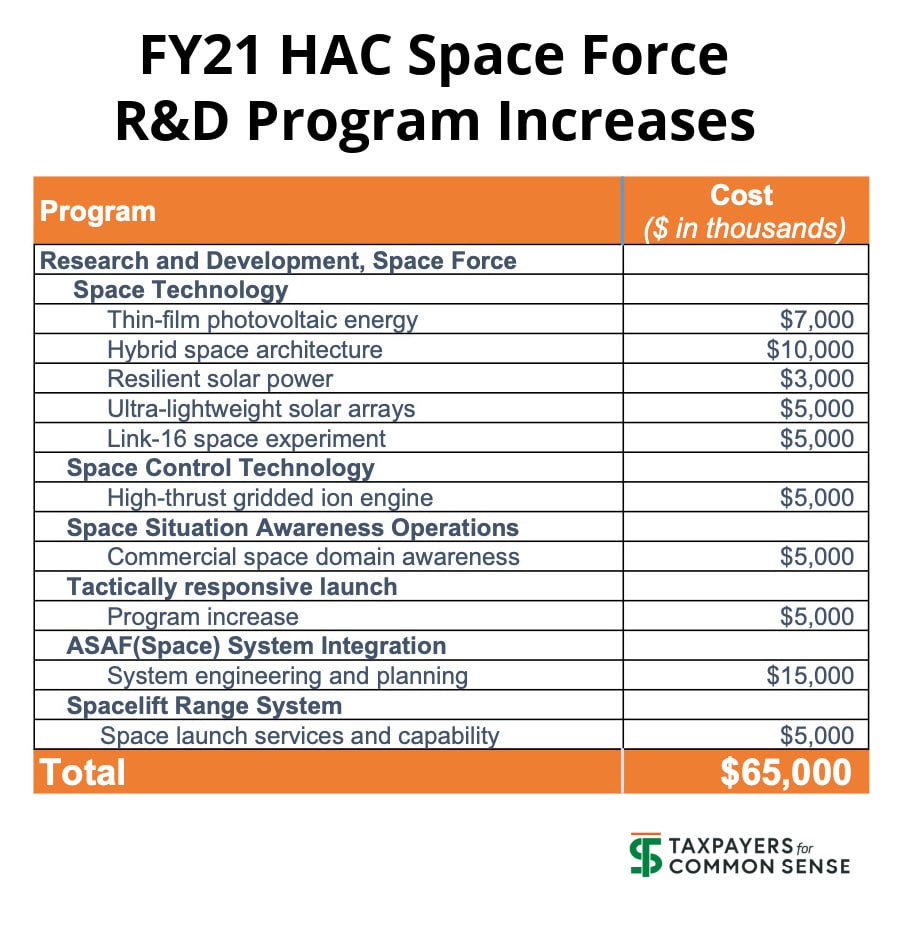 In Research & Development, Defense-wide (read, mostly Special Operations) the Pentagon requested $24.3 billion. The House Appropriators gave the service $336.2 million MORE. You know how the weather index tells you that it might be 95 degrees out, but feels like 105 because of humidity? Well, although it appears that $336 million was added, it feels like the Committee got to spend $888.7 million because they also shifted more than $550 million from programs requested by the Pentagon, to those selected by the Appropriators. There are 79 specific research and development programs added. That means the average dollar figure for an increase is $11.2 million.

Line #203: Industrial Base Analysis and Sustainment Support was the line item getting the most “love” from the Appropriators. They added 16 separate items for a total of $110.5 million. The additions include the vague, “Industrial skills” for $3.5 million to the hyper-specific “metal-organic frameworks” for $7.5 million.

And Line #49: Defense-Wide Manufacturing Science and Technology Program has another 12 programs jammed in for a total increase of $123.5 million. How many companies do you suppose are competing for “High tempreture (sic) carbon composites manufacturing?” Maybe you have to spell it wrong to qualify for that $7 million addition!

It’s Past Time to Get it Done